Author, B.J. Daniels is joining us today with a Q&A and a brand new Montana series!

1. WILD HORSES is part of your Beartooth, Montana series and the first book featuring the six Hamilton sisters as the main characters. Have you wanted to write about the Hamilton sisters for a while now or was this a new idea?

I mentioned the Hamilton sisters in earlier books. They were the young women that local men wanted to date, but were reluctant given that the sisters’ father is Senator Buckmaster Hamilton. Not to mention that the young women themselves are…particular when it comes to their men.

2. What is the significance of the title, WILD HORSES?

I like to believe there is some wild horse in each of us. With the Hamilton sisters, who were raised with the run of the huge ranch, they are definitely free spirits. That’s why I knew it would take a special man to get any of them to settle down.

3. The family structure of the Hamiltons has all the classic elements of a fairytale (i.e. mother dies young and father remarries a difficult woman). Do you often find yourself revisiting classic fairytale themes in your books?

Not purposely, but I think those themes are so universal that all writers tend to find them in their work. Also, I don’t think that everyone is built to be a stepmother. Angelina Broadwater Hamilton definitely wasn’t.

4. Will Sarah Hamilton (their biological mother’s) story be explored at all?

The over-arcing mystery in all six books has to do with Sarah, the biological mother who’s been gone for the past twenty-two years. I’m fascinated with her character. She keeps surprising me, which is always good. So, yes, Sarah is in all six books.

5. Each sister has her own solid identity. Did you create a character sketch of each sister or was it a spur of the moment decision?

Because I am one of those writes-by-the-seat-of-her-pants kind of writer, I get to know my characters as they show up on the page. It is great fun because the sisters are all different.

The only reason Livie’s story is first is that I saw her driving along a narrow two-lane in the middle of nowhere in the middle of a blizzard. I’ve done that before so I know how scary it can be. You can’t see a dozen yards in front of your vehicle. You often can’t tell where the road is. And if there is no other vehicles around, that often means that the road has been closed to all but emergency traffic. That means if you go off the road, no one will be coming along to help you. I’ve also made rash spur-of-the-moment decisions that I have regretted. Haven’t we all. But this decision is about to cost her everything.

7. Cooper Barnett is the resident horse whisperer and a determined cowboy – what made you choose horse handling as Cooper’s profession?

I believe men who are good with horses are also good with gentling women.  Livie needs to be gentled. She’s headstrong. She doesn’t think she needs a man. But she wants Cooper, who is equally headstrong and independent to a fault. Obviously, they are going to have to work some things out before they can really get together.

8. What is the dynamic between the Hamilton sisters and their father, Senator Buckmaster Hamilton?

The sisters are very loving toward their father. He has given them free run of the ranch – and anything they’ve ever asked for. He realizes that was probably a mistake, but he only wants them to be happy. He feels bad that they’ve never had a real mother since their biological mother died and their stepmother wants little to do with them. But father and daughters are very close in these books. He’s like all of us parents who look back and wish we had done a few things differently.

9. The story centers around one small mistake and what it costs the main character. What inspired this theme?

Rash decisions can cost you. Especially if you get angry and take off to get caught in a blizzard on a lonely road in the middle of nowhere.

I’ve been on those roads, in those blizzards, and wished I hadn’t left home when I did. But there is no turning back often because the road behind you is possibly worse than the one you are on. You’re basically trapped because there are no towns to pull off in and often no ranch houses or anything else for miles. Also the snow is often deeper at the side of the road so you can’t even pull off and wait out the storm.

You just keep going and pray you don’t go in the ditch because you could be there for a very long time and if it is really cold out, you might not make it before someone comes along.

You can see why I love writing about Montana and what I know.

10. You dedicated this book to your father and his love for Montana. How did growing up there influence your writing?

My father was the major influence in my life. He always told me I could do whatever I wanted to do when I grew up. He encouraged me always and got to see me published before he died, something I am very thankful for.

But he also gave me Montana. We moved here when I was five. He loved it and he passed that love on to me. It will always be home.

11. Here’s a cover art question. Which do you prefer: an illustration of a cowboy or the real thing?

As long as the cover conveys the feeling of the book, I would be happy either way. I have been very lucky to get some wonderful covers. The WILD HORSES cover is beautiful and it has that feel of being away from it all.

12. Without giving away too much, what is your favorite suspense scene in the book?

I would have to say the opening. What is worse than going off the road in a blizzard in the middle of nowhere, thinking you will freeze to death before morning, and then you see headlights through the falling snow. Someone is coming. But are they really going to save you?

13. Was this story inspired by any films you’ve watched or books you’ve read?

I don’t think so. As writers everything we see, hear, touch or smell – let alone imagine – can end up in our books and we have no idea where it came from.But my father loved old murder mystery movies and westerns so I’ve watched a lot of them. And I love Hitchcock.

14. Who would play Livie and Cooper in a movie?

I have to admit I’m not up on the younger actors. So I’d have to leave that up to my readers to decide. I watch a lot of old movies.

15. What is the steamiest romance scene in the book?

Now if I told you, I’d have to kill you. No, seriously, you’d want to flip to that part of the book. Sorry, no spoilers.

16. How was the writing process different for this book than for past books you’ve written?

They all seem like they are going to be easy when I start a book. I’m excited and hopeful. But there is always a point where I think I will never finish the book. I swear it is like trying to walk through quicksand at times. I write and write, but the book doesn’t seem to get longer. This one was tough because it’s the first one. Once it is in print, there is no changing any of the setting, characters, past events. So especially with the other sisters, you have to be sure you didn’t say anything you will regret.

17. How do you deal with the pressure of deadlines?

I treat writing like a real job. Except without weekends. I write every day. It keeps me in the story and makes it so much easier to pick up where I left off the day before. I also write myself little notes when I can see the next scene or two. Sometimes the deadlines get to me when a book is being difficult. But I’m pretty good at meeting them. I think the latest I’ve ever been is two weeks – and that’s after more than 70 books.

18. What is Flat Cowboy up to these days?

So yes it took off and it’s been a whole lot of fun!

19. When can we expect the next Montana Hamiltons story to come out?

Right now I am finishing up LUCKY SHOT. I am having great fun with the characters. As I said, the over-arcing mystery deals with Sarah Hamilton, the biological mother of the sisters who vanished from their lives twenty-two years ago. Is she the loving mother she pretends to be? And where has she been the past twenty-two years?

It is all great fun. 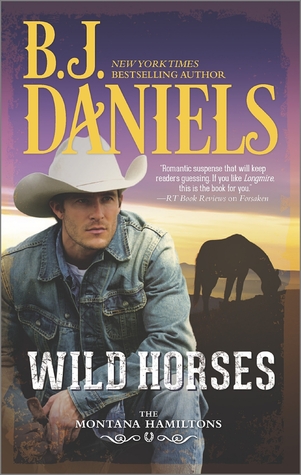 It took only one impusive moment on an empty two-lane highway to cost her everything.

A man's responsible for his own prosperity—especially if he's Cooper Burnett, the most determined cowboy in the West. No one knows what he sacrificed to claim a piece of Beartooth, Montana, for himself and his beautiful fiancée, Livie. No one knows what he's willing to do for love…until a stranger's twisted vendetta threatens the happy ending they should've had long ago.

One fateful mistake isn't the only secret Livie Hamilton is keeping from her fiancé. Victimized during a treacherous blizzard by a man she thought she could trust, she's pregnant…but unsure who the father is. With an unknown blackmailer threatening to expose her, she must confess to Cooper and trust he'll still protect her. But when the truth falls into place, she may lose the only man she's ever loved—or worse.

GIVEAWAY:
We have one copy of WILD HORSES to give away to one, US only, reader. To enter, just leave a meaningful comment or question for B.J. on this post and fill out the rafflecopter below. Good luck!