#Excerpt of WHEN IRISH EYES ARE HAUNTING by Heather Graham

We are excited to share an excerpt with you from WHEN IRISH EYES ARE HAUNTING, an Adult Paranormal Romance novella in Heather’s Krewe of Hunters Series! 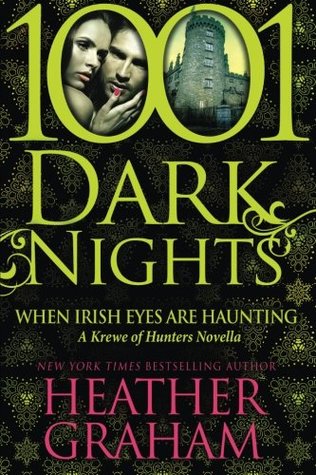 
Devin Lyle and Craig Rockwell are back, this time to a haunted castle in Ireland where a banshee may have gone wild—or maybe there's a much more rational explanation—one that involves a disgruntled heir, murder, and mayhem, all with that sexy light touch Heather Graham has turned into her trademark style.

Up on an elbow, he studied Devin. Her back was to him—long and sleek and provocative. The covers came just below her hip at an angle and it was almost as if he were looking at an artist’s rendering of a stunning woman in an elegant repose. She was sleeping soundly. He really shouldn’t wake her. It was nearing midnight.

They’d already had an incredible time playing in the massive claw-foot tub. He could close his eyes and smile and picture her sitting across from him in a swell of bubbles, laughing as they used their toes to investigate and stroke one another, until she’d come into his arms and they’d slid and laughed and made love in the heat and the bubbles and the steam rising around them.

But now, the clock hadn’t quite struck midnight yet.

Still, cruel to wake her…

Maybe he’d just touch. With a feather-light touch, he drew his fingertip down the sleek and sensual line of her back and spine, just to the place where the sheet hid the rise of her hip. Once…and twice…

And then she turned to him with her brilliant blue eyes, a smile curving her lips, and he knew that she had only been drowsing and that she’d felt his first touch and was laughing inside until she’d decided on mercy.

She rolled into his arms, burying her head against his chest and delivering kisses against his flesh. He was instantly aroused, aware that his every muscle seemed to twitch, that she could awake a fire in him instantly, and that she could tear at his heart with a whisper or a word. He felt her move low against him, felt her hair fall upon him like caresses in silk and his arms wrapped around her as he groaned and then pulled her up to him, meeting her mouth with his own with desire and hunger and love. He meant to play, to tease, to worship the pure beauty of her form, and yet the fire burned so quickly that she smiled as she straddled and set atop him, until they rolled again, entwined, and lay side by side, then rolled again, moving, writhing, making love, laughing breathlessly at awkward positions, their laughter fading as urgency prevailed until they climaxed almost simultaneously and fell beside one another—panting for breath.

Then she curled into his arms again. She whispered that she loved him, more than she had ever imagined possible. He returned the words.

“I love you more than life itself,” he vowed.

For a moment, she stared down at him and the solemnity of his words seemed to encase them as if they were one.

New York Times and USA Today best-selling author Heather Graham majored in theater arts at the University of South Florida. After a stint of several years in dinner theater, back-up vocals, and bartending, she stayed home after the birth of her third child and began to write, working on short horror stories and romances. After some trial and error, she sold her first book, WHEN NEXT WE LOVE, in 1982 and since then, she has written over one hundred novels and novellas including category, romantic suspense, historical romance, vampire fiction, time travel, occult, and Christmas holiday fare. She wrote the launch books for the Dell's Ecstasy Supreme line, Silhouette's Shadows, and for Harlequin's mainstream fiction imprint, Mira Books.          Heather was a founding member of the Florida Romance Writers chapter of RWA and, since 1999, has hosted the Romantic Times Vampire Ball, with all revenues going directly to children's charity.  She is pleased to have been published in approximately twenty languages, and to have been honored with awards from Waldenbooks. B. Dalton, Georgia Romance Writers, Affaire de Coeur, Romantic Times, and more. She has had books selected for the Doubleday Book Club and the Literary Guild, and has been quoted, interviewed, or featured in such publications as The Nation, Redbook, People, and USA Today and appeared on many newscasts including local television and Entertainment Tonight.          Heather loves travel and anything having to do with the water, and is a certified scuba diver. Married since high school graduation and the mother of five, her greatest love in life remains her family, but she also believes her career has been an incredible gift, and she is grateful every day to be doing something that she loves so very much for a living. http://www.theoriginalheathergraham.com/