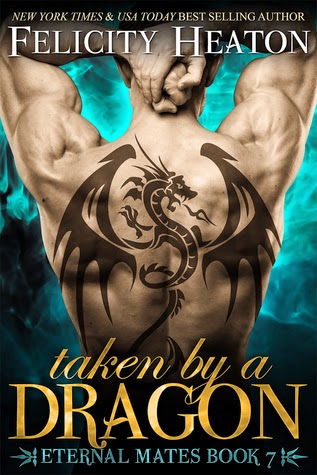 Possessed by a need to save a beautiful Amazon warrior from the vision he witnessed, Loke snatched her from the midst of the battle between the Third and Fifth realm of the demons, and carried her to his home deep in the black mountains of Hell to protect her. But as the fierce little female awakens, he finds she’s anything but grateful, and his dragon instincts roar to life to warn she might be more to him than an enemy—she might be his fated female.Anais remembers meeting a handsome warrior in the heat of battle, a man who was her enemy but who looked at her with eyes that held dark heat and wicked promises. When she wakes to find that same dragon shifter has taken her captive, desire is the last thing on her mind, but escaping him to return to Archangel, the hunter organisation she works for, sounds less than appealing when he reveals the reason he took her—to stop her from dying.Can Loke protect Anais from the dangers of his realm and how far will he go to save her from the future he keeps witnessing? Can Anais resist the fierce attraction that burns between them as hot as fire and stay true to Archangel or will her heart be taken by the dragon?

Lexi's Thoughts:
The Dragon has taken his prize and she is a handful! Anais thinks she has been on the right side working for Archangel, but the blue dragon who stole her away is going to turn her life upside down.


The Eternal Mates series continues exactly where the sixth book left off. Loke flew off with Anais because of a vision he had of her death. He has been a loner for a long time and having a woman in his cave messes with more than his head. Anais is a warrior and can’t just sit, she pushes Loke’s boundaries and ends up being taken by a rival dragon. When Loke fights for her their attraction to one another really cements, the no turning back point.

This is a Heaton book so you know there will be plenty of heat but along with Loke and Anais’s story you still get the continuing story arc of the demon relms war and Archangel. Heaton introduces a new female dragon who comes for a sword that Loke had been keeping safe. That is a story that these eyes can’t wait to read! There is still so much going on with Archangel and the different leaders and paranormal characters it is hard to know where Heaton will take us.

This reader could have benefited from a re-read of the earlier books, one because they are great fun and two because there have been waay too many books in between then and now. The previous books were a bit more, engaging? Something more, but the continuation of the world and being able to see some of my favorite characters made Loke and Anais’s story a good adition to the series and the next ones are on my to be read list!