Hi! Or should I say bon jour! I’m very excited for readers to discover my version of the sexy musketeer Athos as he seeks to leave the musketeers behind and pursue a quieter, less adventurous life. Of course, life never goes the way a man plans it to. And even though he’s sworn to never again be brought down by a wicked woman, that type of woman is his greatest weakness. I expect his wish for less adventure will go unfulfilled. All the more fun, I say. And I can’t resist adding: All for one, and one for all!

Excerpt from THE UNFORGIVEN: ATHOS


The decision to turn and walk away from D’Artagnan’s request had been the right one. The lieutenant had followed him out from the musketeer headquarters, yet hoping to convince Athos to take on the mission. Mention of la Belle Dame sans Merci had boiled the blood in Athos’s veins.
How Athos would love to put an end to that wicked woman’s reign of terror. But he had already fulfilled a quest for vengeance involving a similar woman. And for that one vengeful act he continued to suffer, for her ghost yet haunted his soul.
Damn love and all its indiscretions! Love made a person vulnerable. It reached in and gripped a man’s heart and twisted. Never again would he look a woman in the eyes with more intention than desire—for he did enjoy the carnal pleasures. And right now he craved a dance with a nameless woman who entertained lust in her eyes and the promise of heaven in the sway of her hips and the purse of her lips.
He reached the outskirts of the execution square and pushed by a young pretty in a high-hipped gown of burgundy satin. When the smoke from a nearby bonfire filled his nostrils and dried in his throat, he swung around, and swept his gaze over a bobbing sea of beaver hats plumed in red, white, and black. Gesturing hands slashed before his vision, but he ignored the common, the unremarkable. He wanted— Well, he would know it when he saw it.
But there! Lingering before a narrow passageway bisecting the soot-coated walls of the Hotel d’Ville—the city hall—from a string of stables echoing with the clang of pounded iron, stood, not the woman who promised femininity and fruit, but someone much more intriguing.
Ah. His farewell.
Wide eyes locked to Athos’s gaze. He could not determine their color from this distance, but they glinted defiantly. Shadows caressed the vision, from her braided locks capped by a wide-brimmed hat pulled to the top of her eyes, to the hem of her skirts that danced a long way to the ground. A man’s high-buttoned doublet of dark fabric finished the look.
Black plumes tickled a pale cheek, setting off the pomegranate fullness of her mouth. When her lips parted, perhaps to speak, Athos swallowed at his increased heartbeat. Arousal warmed his chilled body.
Entranced, he could not move. Elbowed and jostled, he held his ground while maintaining a steady fix on the woman’s eyes. Yes, they offered a challenge. Not a tease or a flirtatious promise, but a call to the dueling grounds. A particular form of duel that would tether a man and woman into a compromising position.
Amidst the execution horror, and the winter bleakness, Athos wanted only to feel something right now. And be it in the arms of a mysterious woman, all the better.
He stepped forward. The vision of deep red lips and dark leather turned and dashed away. But not without a return glance.
Follow me, those glittering eyes silently coaxed.
And he did.
Shoving his way through the crowd, he burst from the swell of stinking life. Ha! Once again in pursuit. And, here, he had given leave of that task.
She moved swiftly, as if a leather-winged griffin seeking solace within the ash-and refuse-tainted shadows. The alleyway opened to a street bracketed by snugly stacked limestone houses. A jog to the left stood the hallowed grounds of St. Gervais; a turn would find him in the cobbled courtyard to the cathedral’s burial grounds.
She dashed across the street and down another dark passageway that wove between aging houses. Another turn, and a descent down a slanted coach-run quickened their pace.
Here the city quieted. Wet cobbles echoed with each tread of his boots. The scent of burning firewood hung heavily in the cold air. He thought to race forth and sweep the fleeing woman into his embrace. A hard, demanding clasp that would either force a scream from her, or…
Or what? Devilish anticipation crooked his mouth to a smirk. She ran swiftly and easily maintained her distance. Not as teasing as he’d prefer. He could not make a dash for her if he tried.
But ahead loomed her ruin. An old limestone garden wall sequestered an ancient grouping of stone and thatch houses from the bourgeois world of brick and red-tiled roofing.
With an audible gasp, she turned and slipped into a dark alley that narrowed to but a child’s width. Success! Athos raced into the cleft and pressed the woman’s shoulders against the rough, snow-dusted wall. She did not cry out. Victory flashed in her eyes. `Twas as if he had pursued the devil wearing the guise of a femme fatale. But he was not one to resist the devil’s call to sin.
“You want this?” he asked, but cared not for the answer.
“More than you know.”
Ah, an agreeable wench.
Her lips were cold, but he warmed them with a hard, bruising kiss. She welcomed the insistence. “I need you.”
“Then take me,” was her husky reply.
Her hands found hold around his back. Gloved fingers inched up under his leather doublet and tugged his well-worn Holland shirt from his chamois breeches. With a greedy pull, she tugged him close enough to gauge his want, which grew hard as it pressed against her hip.
Sweet mercy, this was almost too easy. 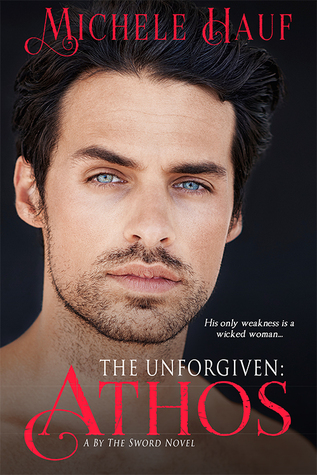 
Musketeer Arnaud de Sillègue d’Athos is ready to bid adieu to the King's Guard and to lay down his sword. Yet he's been charged with one final mission—to apprehend a dangerous enemy of the king, the Belle Dame Sans Merci. Despite his desire to apprehend a woman who causes such destruction, Athos refuses... until he sees a sketch of her. It's the same villainess with whom he had been locked in a passionate, sensual moment.

Emmanuelle Vazet never gives up control, even if briefly, in the arms of a blue­eyed stranger, she felt the need to give in and let desire take over. But now circumstances have placed her at the scene of a murder. Her reputation—and the ridiculous name—has preceded her, even if she is innocent. Now her nameless lover is the enemy. A royalist. A musketeer who could be her undoing... unless she becomes his undoing first.


Michele has been writing romance, action-adventure and fantasy stories for over twenty years. Her first published novel was DARK RAPTURE. In February 2015 she celebrates her 70th published story!

France, musketeers, vampires and faeries populate her stories. And if she followed the adage 'write what you know', all her stories would have snow in them. Fortunately, she steps beyond her comfort zone and writes about countries she has never visited and of creatures she has never seen. michelehauf.com