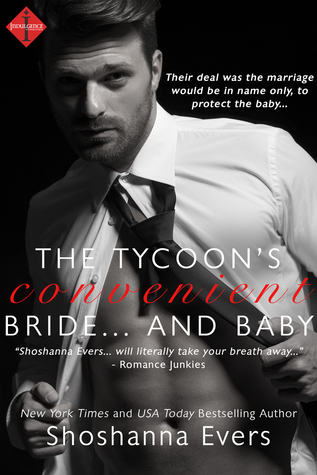 
After her brother and his wife go missing and are presumed dead, Lauren Peters plans to raise their infant daughter. Her brother's will, however, stipulates that baby Callie can only be raised by a married couple. Lauren’s as single as they come.
Mack Hansen can’t stand idly by while his business partner’s baby is thrown into a foster home. As he sees it, there’s only one solution—he and Lauren will marry for the sake of the baby—and he’ll keep his attraction to her at bay.
Lauren knows that Mack is all about business, including their marriage of convenience. But her unexpected feelings for him have her turned upside down. With passion sizzling between them, can Mack keep Lauren from stealing his heart…and becoming his wife for real?

He loosened his tie. “This is the living room,” he said, as if she couldn’t see for herself. “Kitchen’s through there. If you’re hungry, help yourself. My housekeeper keeps the fridge stocked. I think she said there’s lasagna prepared, too.”
“I’m not hungry,” she said. “Thank you.”
He tossed his suit jacket on the couch with the nonchalance of a man who knew someone would pick it up for him and have it dry-cleaned the following day. “Home at last,” he said, a smile finally breaking over his face.
Mack stepped toward her, suddenly so close she had to tilt her chin up to look into his eyes. His hand reached around her waist, the heat from his palm searing through the thin cotton of her dress to her skin.
“You might not be hungry…but I am.” His gaze on hers made it clear he wasn’t talking about the lasagna.
Oh God. Everything she’d ever fantasized about. Here. Now. The room spun.
“You look scared,” he said. “Do I frighten you?”
She felt breathless. His presence, so close to her, had taken up all her oxygen. “Were you serious about…? You know.”
“Consummating this marriage?” he asked, dipping his head, his mouth just a breath away from hers. “Yes.”
Her heart pounded, the sound so loud in her ears she was sure he could hear it. “I barely know you. I can’t sleep with you.”
“You’re my wife. But I won’t force you to do something you don’t want to do.”
Relief flooded through her at the same time as disappointment. This was crazy. What was she thinking? If she slept with Mack, how long could she keep her heart safe?
Knowing her, she’d fall for him and be left broken-hearted when he didn’t return her feelings. Could she really handle looking at him, knowing he thought of her only as a means to an end, as a way to meet his obligation to her brother?
“I won’t force you,” he murmured, sliding his hand past her waist, cupping her bottom. “But I’d like the opportunity to see if I can’t convince you to come to the marriage bed willingly.”
“The marriage bed,” she laughed shakily. “You’re insane. What sort of marriage is this, anyway?”
But she couldn’t help but gasp as he dropped his touch lower, slipping one finger up past the hem of her dress, pushing the material out of the way.
“If we’re going to be married,” he said, “we may as well enjoy the perks associated with it.”
“Such as?”
He kissed her neck, pressing his mouth against her throbbing pulse. “Such as having a willing sex partner, every night.”
Every night?
She moaned, unable to hold back. She hadn’t had sex in ages. There was barely enough time in the day to run her daycare and heat herself up a microwaveable meal, much less go out bar-hopping to find a suitable partner. But Mack?
What would it mean to have Mack at her disposal, whenever she felt in the mood?
He kissed lower, licking a trail down her décolletage, pulling her bra down with her dress until her nipple peeked up past the low neckline. She arched her back into his kiss as he twirled his tongue around her areola, hardening the taut peak into a tight bundle of nerves before sucking it full into his mouth.
“Take the dress off,” he whispered.
She looked around the open living room, with all the floor-to-ceiling windows. Central Park was visible right across the street. “But…shouldn’t I do that in the bedroom, maybe?”
“The windows are tinted,” he said with a smile. “No one can see in. The housekeeper is gone for the evening. And I want you naked.”
“And you always get what you want, don’t you?” she asked, pulling the thin material up and over her head, letting it fall to the floor in a heap. Before she could second-guess herself, she pulled her panties off as well.
He stared at her as if he were drinking in her nudity and she felt open, exposed, and incredibly desirable all at once.
“Yes,” he said finally. “I always get what I want.”


New York Times and USA Today Bestselling author Shoshanna Evers has written dozens of sexy stories, including The Man Who Holds the Whip (part of the bestselling MAKE ME anthology),Overheated, The Enslaved Trilogy, and The Pulse Trilogy (from Simon & Schuster Pocket Star).

Shoshanna is a New York native who now lives with her family and two big dogs in Northern Idaho. She welcomes emails from readers and writers, and loves to interact on Twitter and Facebook. http://shoshannaevers.com/