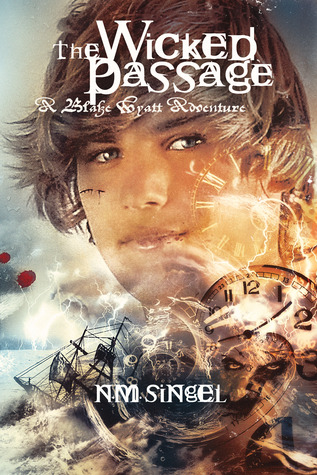 A bizarre assignment from a substitute teacher quickly turns deadly in the epic thrill-ride through time.

Thirteen-year-old Blake Wyatt dug his bloodied fingers into the splintered railing of the ancient ship, struggling for footing in the violent storm.

Minutes ago he was texting his friends in his boring history class. Now, Blake finds himself aboard the sinking Santa Maria—with the great Christopher Columbus begging for his help.

The Admiral is about to be murdered—Dagonblud’s latest victim in his quest to erase the world’s history so he can replace it with his evil empire. Blake is the last surviving Sapphire Traveler who can save him. He must master his incredible new powers so he can sneak through time and destroy the Tolucan leader. But Dagonblud is planning a big surprise.

Will Blake succeed where all others have failed? The only thing that is certain is that Blake’s life, and the world around him, will never be the same.


Thoughts:
“The past needs the present and grows the future.”

THE WICKED PASSAGE by N.M. Singel is an action-packed, YA historical, time-traveling fantasy adventure.  It is well-written and meant for a YA/NA audience.  I wish I'd listened to it with my son when he was in school and not understanding why he needed to study history as it vividly illustrates why history is so important and it does it in an entertaining way that kids would enjoy.

The story features a family of Wyatts who are entrusted with keeping the skin of time intact to lock out the dark forces.  The dark forces are strong and Blake's father, Michael, had failed.  Now it's up to Blake and his sister to repair the damage so as to keep history intact.  There were a lot of exciting and suspenseful action scenes.  I loved the tale's mixture of fantasy and real world history.  I know I will never again think of Christopher Columbus and his three ships, the Niña, the Pinta, and the Santa Maria, without thinking of this book.

"Without the past, there is no future."

I loved the eclectic characters from Blake, a teenager who is totally NOT into school, to the Chronicle of the Rellium that houses a woman, the Parables who look like two bulldogs, Uncle Leopold and more. The dark forces are primarily the Tolucans; their leader, Dagonblud, is the worst of all.  One of his minions is Rat and he's a varmint if there ever was one.

I enjoyed the time travel aspect and the fireworks in the action scenes but got really bored with Blake who refused to believe that he had powers even when it was as plain as the fingers on his hand.  His character was obviously drawn as a typical teenager and I wanted to shake him!  However, I would think that many young people would sympathize with him - hence, I would expect that this book would be rated much higher by a younger audience.

The narrator, Michael Rahhal, was exemplary.  He did an excellent job of bringing the characters to life.  I could easily tell who was speaking from his voice.  His accents and mannerisms enhanced the tale and his performance would, without a doubt, keep a typical YA/NA audience's attention riveted from beginning to end.

I believe that, if I had been listening with a child, I would have rated it 5 stars and I highly recommend it to any adult who wants to interest a child in history.    However, I'm in my early 60s and I found it a bit tedious at times and I did want to shake Blake.  I listened to the very end as I had to know what happened... only to be left with a bit of a cliff-hanger.  I hope there will be a sequel for the fans.