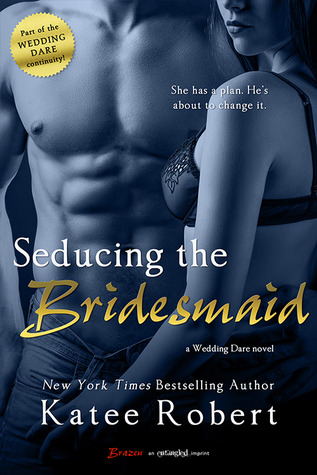 She has a plan. He’s about to change it.

Regan Wakefield is a headhunter in both name and personality: driven, motivated, and unafraid to pursue what—and who—she wants. Naturally, she’s thrilled when her friend's wedding offers her an opportunity to score Logan McCade, the practically perfect best man. Unfortunately, groomsman Brock McNeil keeps getting in her way, riling her up in the most delicious of ways. But Brock’s smooth southern charm isn't part of the plan...so how exactly did they end up having searing-hot sex?

Thoughts:
”Woman you’re as mean as a copperhead. Come here let’s find out if you’re as cold-blooded.”

SEDUCING THE BRIDESMAID  is the story of bridesmaid Regan Wakefield and groomsman Brock McNeil.

Brock, our hero, has spent his entire life in his brother's shadow.  His brother has always been blessed with his father's favor and is slated to follow in his father's footsteps as the head of their family's business.   Brock has been shot down so many times attempting to gain his father's approval and his inability to do so has scarred him.  I loved Brock.  He was a southern gentleman, full of charm.  However, it was going to take more than charm to tame the rattlesnake of a woman who has captivated his attention.

Regan, our heroine, is a strong-willed woman with a plan.  She has deemed her friend's wedding as the perfect place to make her move on Logan McCade, Colt's best man, who fits Regan's perfect mate criteria to a tee.  She has her life mapped out and Brock McNeil is not on her radar.  In fact, he's the exact opposite of what she's looking for;  He's a handsome playboy, with a laid back attitude who has had everything handed to him on a silver platter.  After Regan agrees to a one-night-stand with Brock, she can't deny their sizzling chemistry that flames her every waking thought.

I'd like to share three more of my favorite quotes illustrating the steaminess and the humor to be found within these pages:

"Darlin', if I didn't know better, I'd say you were thinking about sexing me up."
Her eyebrows rose, though he didn't miss the way her gaze coasted over his body.  "It's a good thing one of us knows better then, isn't it?"
---
"I can assure you, though, I'm a man who isn't short in any sense of the word."
---
He released her arm and crossed his own over his chest.  "I'm trying not to jump to conclusions.  Spit it out."
"I'm more of a swallowing kind of a girl."
Holy hell.

This tale is truly a testament to the adage that opposites attract.  As with the other books in this series, the heat level is spicy hot!  I have to confess that I spent the first half of the book not crazy about Regan;  She was sleeping with one man while supposedly focused on another.  However, I kept reading as I really liked Brock, and, lo and behold, Katee pulled a rabbit out of the hat!  The HEA ending was really good and made me almost totally forget the rough beginning.  I'm enjoying this series and Regan has been a prominent character in the previous books.  I'm glad to have read hers and Brock's story.