We are absolutely thrilled to bring you the Release Day Launch for Ann Aguirre's I WANT IT THAT WAY! I WANT IT THAT WAY is a New Adult contemporary romance and is the first book in the 2B Trilogy Series published by Harlequin HQN. We are already in love with this series and Ann's characters! Read the excerpt, then go grab your copy today!!


Nadia Conrad has big dreams, and she's determined to make them come true—for her parents' sake as well as her own. But between maintaining her college scholarship and working at the local day care to support herself, she barely has time to think, let alone date. Then she moves into a new apartment and meets the taciturn yet irresistible guy in 1B….

Daniel Tyler has grown up too fast. Becoming a single dad at twenty turned his life upside down—and brought him heartache he can't risk again. Now, as he raises his four-year-old son while balancing a full-time construction management job and night classes, a social life is out of the question. The last thing he wants is for four noisy students to move into the apartment upstairs. But one night, Nadia's and Ty's paths cross, and soon they can't stay away from each other.

The timing is all wrong—but love happens when it happens. And you can't know what you truly need until you stand to lose it.

“Where are you from?”
Ah, an actual question. That means I can ask one back.
“Nebraska, toward the South Dakota and Wyoming side, if that helps.”
“I’ve never met anyone from there.”
Michigan was a long way from home. “I usually get ‘not in Nebraska anymore’ jokes, and then I have to decide if I’m going to remind them that’s Kansas or play along.”
“What do you usually do?”
“Play along.”
“You don’t like conflict, huh?” He sounded normal tonight, as if talking to me wasn’t an unpleasant chore anymore.
That was a relief since I’d come to look forward to these moments with him so much. More, maybe, than I’d like to admit.Right. Friends. I distracted myself by considering his question. “Not if it can be avoided. I’m not what you’d call pugnacious, no. But I like to think I don’t back off important issues. What about you?”
“No.” His voice was bleak and quiet. “I don’t. Even when I should.”
Wow, that took a dark turn.
If I could’ve jumped onto his patio without breaking an ankle or waking Sam, I’d have been down there like a shot. The distance between us seemed intolerable, and from the knot in my throat, I didn’t see how I could live another second without touching him, finding out if his hair was as soft as it looked or what he smelled like. I wanted him in a way I never had before.
In high school, I had a boyfriend who played basketball, and we broke up when I left the state. It was a rational decision, and I didn’t miss him that much once I was gone. My freshman year, I went out with a lot of different guys, one date here, two dates there, but I never clicked with anyone enough to focus on them. Sometimes there were hookups with no strings, no expectations. Classes, friends and work seemed a lot more important. The intensity of this attraction was foreign and frightening, if exhilarating. I might already be backing off if I had the faintest sense that Ty was jerking me around on purpose.
Wish he didn’t make me feel this way. It’d be so much simpler if I could friend-zone him.
I realized I still hadn’t touched his verbal grenade. “We all have things we’d do differently in hindsight.”
“What is it about you?” he asked in a wondering tone.
“Huh?”
“You make me…better. Calmer.”
“Like a sedative?” I snickered. It was the least sexy thing a guy had ever said to me, including a junior high squeeze who said my face wasn’t actually that bad.
He laughed, too, a sheepish sound. “I didn’t mean it like that. Just…I’m worried pretty much all the time that I’m dropping the ball somewhere, about to face-plant, but when I come out here and hear your voice, everything backs off like ten steps. I can breathe again.” 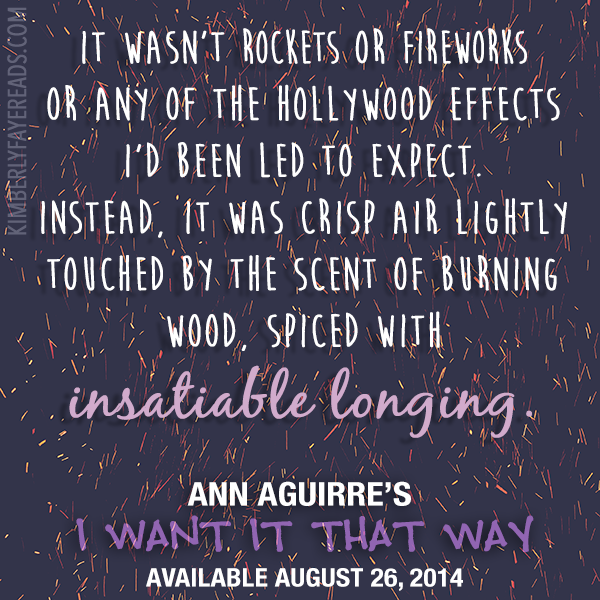 
Ann Aguirre is a New York Times & USA Today bestselling author and RITA winner with a degree in English Literature; before she began writing full time, she was a clown, a clerk, a voice actress, and a savior of stray kittens, not necessarily in that order. She grew up in a yellow house across from a cornfield, but now she lives in sunny Mexico with her husband, children, and various pets. Ann likes books, emo music, action movies, and she writes all kinds of genre fiction for adults and teens, published with Harlequin, Macmillan, and Penguin, among others. http://www.annaguirre.com/