The first in Nicole Simone's new Kiss series releases tomorrow, August 12th, but you can read an excerpt from THE ACCIDENTAL KISS here right now! 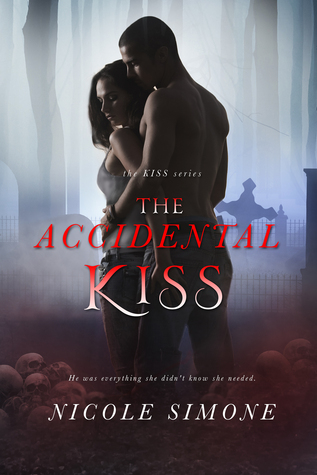 But he was everything she didn’t know she needed.

Marked by tragedy, Sky Noel leaves Los Angeles with her mom to start anew in Castor, a small town in Louisiana. It was supposed to be Sky’s chance to have a normal life but she soon finds out normal isn’t written in her DNA.

When a mysterious boy named Daemon shakes up Sky’s fragile hold on reality, she is thrust into a world where zombies and voodoo not only exist in the pages of a novel. They are hidden in the darkest corners where danger lurks and death awaits. With a price on her head, Sky has to put her trust in the boy with the ocean blue eyes but is Daemon everything she was warned against and more?

Tricked into selling his soul, Daemon lives out his existence at the mercy of the voodoo priest. That is until one fateful night when his path is forever changed.

Desperate to atone for his sins, Daemon brings it upon himself to protect Sky at any cost. However, a secret hidden in his past could rip away the very person who makes him feel human again.

A hazy mist hung low over the town as I exited the library. Five textbooks weighted down my arms and I thanked my lucky stars my house was only five blocks away. The streetlights illuminated my path but it was eerily quiet out. I forgot how everybody locks their doors by five in small towns. That ominous feeling I couldn’t shake from lunch only got stronger as I walked. I clutched the books tighter to my chest and hurried my pace.

Up ahead a shadow of a man stretched across the sidewalk. As I got closer, a voice rang out among the stillness. With a start, I realized it was Daemon. He was on a phone call, laughing about something. Although confronting him with my questions alone in the dark wasn’t ideal, I couldn’t wait any longer. Raising my free hand to summon his attention,

Daemon stepped off the curb. Right in front of an oncoming car.

My books dropped to the ground. “Daemon, watch out,” I screamed.

His green eyes turned toward me but it was too late. The blinding white headlights swallowed him whole. A blood-curdling cry left my lips.

The driver of the car sped on like nothing had happened. Running to where Daemon was hit, I reeled back in shock when he wasn’t there. What the fuck? Was I losing my mind? The sensation someone was watching me rolled up my spine. I looked toward the opposite side of the street and nearly keeled over. Daemon was leaning against a tall oak tree without a care in the world. As if he didn’t just stare death in the face.


Nicole Simone works in digital media by day and at night, pen’s character driven romance novels that will make your mama blush. She lives in Los Angeles, C.A with her fat bulldog named Humphrey. http://nicolesimoneauthor.blogspot.com/