Anna Sullivan has a new contemporary romance in her Windfall Island series out now and we'd like to share it with you! 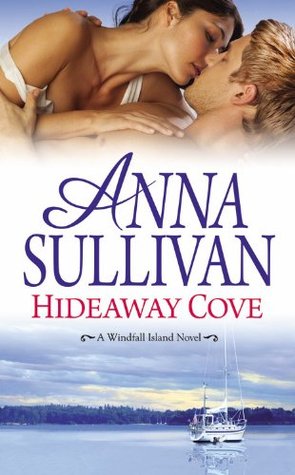 Jessi Randal walked away from her last relationship with a baby and a broken heart. Now, years later, the last thing this single mom wants is to give Windfall Island—and all its nosy residents—anything more to gossip about. But the moment she lays eyes on the tall, sexy stranger with the slow Southern drawl, she knows she's in delicious trouble . . .

Holden Abbot is on the island to find the missing heir to the Stanhope family fortune. It's his job to charm as many secrets out of the town as possible. And if he can charm Jessi into his bed, even better. When all evidence points to her as the heir, a dangerous enemy sets his sights on Jessi and her son. Now Holden will have to risk everything to protect the family he's come to love.

One day at a time. Yeah, she remembered.
Jessi breathed out, then in, slow, deliberate breaths. Hold’s argument sounded so logical, so simple and effortless. Just take it a day at a time, enjoy what they had for the time they had it. What could be easier?
But how did she shut off her own doubts and fears? After nearly a decade of putting Benji first, how did she ignore his feelings?
She trusted Hold, but— No, no more buts, no more what ifs or tomorrows. She trusted Hold. Period. He’d never do anything to hurt either her or Benji on purpose.
“You’re right, Hold. Let’s just enjoy today and let tomorrow take care of itself.
He studied her for a minute. She kept her eyes on his, let him make what he would of her acceptance. He put his arms around her, pulled her in for a hug. “We’ll take our time Jessica, get to know one another, and see where it takes us.”
She leaned back, looked into his face. “Hold . . .”
He put a finger over her lips, then his mouth, one of his sweet, simple kisses. He couldn’t know how that kiss, the kind one lover gave another where there was more than sex between them, got to her.
“You think you know me—”
She put her fingers over his mouth. “I do know you.”
“You can never really know another person, Jessica. Not everyone is as honest—” He broke off, dropped another light kiss on her lips. “It’s not important. I’m starving. Let’s eat.”
He stepped away, flashing her a grin before he went into the kitchen, a grin that didn’t hide the shadows in his eyes.
So, he’d been hurt before, Jessi realized, and by a woman if she didn’t miss her guess. It was so clear in that moment. A man as irresistible as Hold Abbot would have been involved before, and deeply, she thought. He might be naturally flirtatious, but she’d discovered that he wasn’t casual about acting on those flirtations.
No, someone, some woman, had broken his heart. And his trust.
He held back, Jessi understood now, because he was waiting for her to hurt him, and in holding back, he guaranteed they’d hurt one another.
But she was already too far gone to be careful now.


Anna Sullivan was born and raised in southeastern Michigan, the seventh of nine children, whose claim to fame was reading five books a week in grade school. Needless to say, her obsession with the written word only grew from there-despite a short, and misguided, foray into the world of computer science (the "sensible" job path). She still lives in Michigan, with her husband, three children and two dogs whose life of leisure she envies but would never be able to pull off. http://www.annasullivanbooks.com/