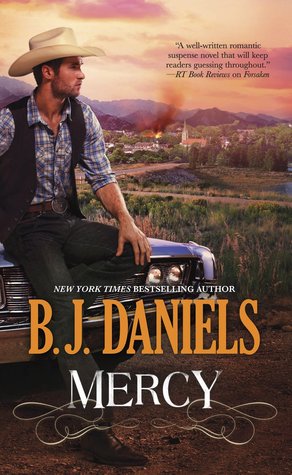 For U.S. marshal Rourke Kincaid, there's the law…and then there's his law. When the two don't agree, he always trusts his instincts. A killing spree has gripped the Northwest, showing a strange connection that only he sees, and now the old rules of justice no longer apply. Forced to turn rogue, he goes deep undercover to track his mysterious female suspect to a quiet, unassuming café in the wild, isolated mountains of Beartooth, Montana.

But encountering Callie Westfield complicates his mission in ways he never expected. As suspicious as she seems, her fragile beauty and sexy charm get to Rourke. Then the gory crimes begin anew. With his heart suddenly at war with his instincts, he has only two options. Either turn Callie over to the law, or put everything—including his badge and his life—on the line to protect her.

MERCY by B.J. Daniels is the fifth book in her Beartooth, Montana series.  I positively love the cover and the blurb on the back of the book drew my attention immediately.   Each of B.J.'s books can be easily read as a standalone even though there are interconnected characters.  I have read all the books in this series and MERCY is an incredible addition to it.  B.J. always manages to weave multiple story lines together in a masterful way.  MERCY has a bit less of the multiple layers the other books in the series have had but I also felt that MERCY seemed to be even more emotional and suspenseful than the preceding books.

U.S. Marshall Rourke Kincaid, our hero, is totally focused on a cold case involving a girl who appears in three post-crime photos.  Rourke believes that she is the key to finding the serial killer.  He hires a detective who finds the girl, Caligrace Westfield, our heroine, working as a waitress in Beartooth, Montana.  Taking leave from his job, Rourke goes undercover to Beartooth and encounters Callie.  While his ex-partner is convinced Callie is the serial killer, Rourke is not.

Rourke was handsome, smart and an accomplished, righteous lawman who really believed in what he was doing.  He didn't have to work, but he wanted to.  Callie had never stayed in one place too long.  She was a loner and a vulnerable character.  The PG-13 chemistry between Rourke and Callie was sweet and their dialogue was quite entertaining at times.  It was a treat to catch up with returning characters including Kate, Nettie, Frank and Frank's crows.  My favorite scene involved the crows - I've become quite enamored with crows since I started this series.:-)  The primary villain and her family were truly evil and diabolical; they gave me the creeps.

There were a few secondary mysteries. One involved the sheriff and Nettie, another with the sheriff's daughter, and still another with the rebuilding of the store that had burned down in the previous book.  That may sound chaotic but it wasn't.  B.J. is truly a master at seamlessly melding multiple storylines.   This story had me on the edge of my seat too many times to count.

MERCY is a riveting thriller, more intense than its predecessors and I can't recommend it highly enough to fans of western suspense.  Each of the books in this series have been fantastic reads. B.J's writing is exemplary, as always and her books have become must-reads for me.   I never see the twists and turns that she injects in every one of her stories.  If you are looking for a book with a rich storyline and gripping suspense that keeps you turning the pages until the very end, then you won't want to miss MERCY!
Posted by Crystal @ RBtWBC at 8/27/2014 06:00:00 AM