Shout out to WeLoveKink for putting this Kinky Christmas Hop together! XOXO
It's Christmas time. It's cold outside, most places. We're all looking for a little something to warm us up and we all know that the naughtier the girl, the more interesting the present Santa leaves. *wink, wink* The hot Santa I'll be featuring today appreciates getting a little naughty over the holidays. And one that wears leather while riding a Harley definitely sounds like my kind of man in red! So what does a scarf, a belt, a pearl necklace, a feather pen and Christmas all have in common? Read this excerpt from SANTA WORE LEATHERS to maybe find out! 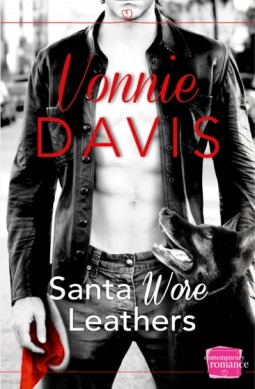 "I've only begun." He lay the pearls aside and reached for the feather pen. Turning it around, he flicked the feather beneath the curve of her breast and across her nipple. Her mouth opened slightly as her nipple peaked even more. "Every time you use your pen from now on, you'll think of the naughty ways I've used it." He moved to her side and trailed it down her stomach. "Naughty?" Her voice had a breathy quality which hardened him to the point of madness.

He flicked the feathers across the tops of her thighs near their junction and she arched again. "Oh, yeah, baby. Naughty." Tossing the feather aside because, really, why should it have all the fun, he scooted farther down the bed and began licking her ankles. Slowly he worked his way up her toned legs, inhaling her scent and loving every inch of her satiny smooth skin with his hands and lips.

Warming up yet? How about a kindle copy of Vonnie Davis' SANTA WORE LEATHERS of your very own? Yes sirree! We're also going to give away a kindle copy of Cynthia Eden's A VAMPIRES CHRISTMAS CAROL for you paranormal lovers out there as well and some envelopes filled with swaggy goodness! And as a thank you for stopping by The Kinky Christmas Blog Hop, here is a sexy Santa. You can find the giveaway entry for the aforementioned prizes *ahem* under ole' St. Nick...


GIVEAWAY:
To enter, be sure to be one of our fabulous followers (Follow options > on the right-hand side-bar) and then fill out the rafflecopter below. Extra points available. Good luck and Happy Holidays!