Exclusive Excerpt from In His Shadow by Tiffany Snow (#Giveaway)

Today we have an exclusive excerpt from Tiffany Snow's new release and the first book in her Tangled Ivy Trilogy, IN HIS SHADOW! 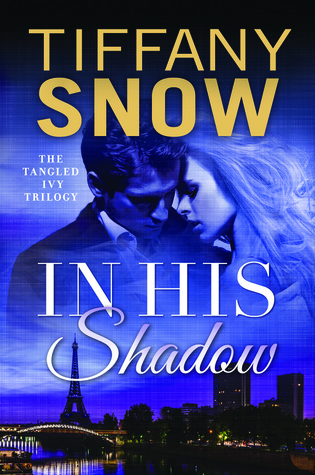 
Ivy Mason is hiding—from her past, from herself, and from anyone who could love her. The only kind of love she’s ever known hurts, leaving scars on her body and soul. Now, her world may be boring and predictable, but that’s exactly what she wants. Until Devon Clay walks into her life.

A lonely man in a deadly profession, Devon works as an agent for an underground British agency known only as the Shadow. Nothing about him is safe or ordinary. The danger that consumes his life turns into an addiction Ivy can’t resist...even if it proves fatal.

As Ivy’s past begins to catch up with her, she wonders if love really is the twisted thing she’s always thought it was. Maybe it could be more with this man, who’s shown her that she doesn’t need to protect herself from everyone. Is what she feels for Devon worth the risk? He may save her heart or break it, if she manages to stay alive.


Exclusive Excerpt: In His Shadow by Tiffany Snow

Devon drove to a restaurant out of my price range and handed the keys to the valet. I glanced around as I got out of the car, looking for a cab, but Devon was already there, taking my elbow in a firm grip and steering me inside. We were led to a secluded table in a quiet corner. I unbuttoned my coat and Devon was there again, standing behind me, his hands on my shoulders as he lowered the heavy fabric down my arms.

His proximity made the air freeze in my lungs, the hard wall of his chest at my back, and I couldn’t move. Lowering his head, Devon’s lips brushed the skin of my neck, bared by the loose blouse and my side-swept ponytail. My hands clenched into fists at his touch, my body leaning ever so slightly into his, then he stepped away.

He ordered a bottle of wine and our dinners, though I couldn’t fault his choices.

We sipped our wine, an excellent vintage, and took measure of each other, as though we were calculating an opponent’s strengths and weaknesses. As for me, well, I just prayed I wasn’t as transparent to him as I felt.

“Why are you doing this?” I asked once the waiter had brought our food. “Is wining and dining me suppose to make me agree to sleep with you?”

The absolute certainty in his words, his demeanor, set my teeth on edge. There was confidence … and then there was Devon, who put a whole new level of meaning to the word arrogant.

“You seem very sure of yourself.” I said stiffly. I took a bite of the lamb he’d ordered for me. No sense letting good food go to waste.

“Just stating a fact,” he said. “Am I wrong?” His eyes studied me over the rim of his wineglass as he took a drink, his gaze like a palpable touch as it dropped to my neck, shoulders, and breasts.

“Why me?” I asked, avoiding the question. “I’m sure you could have your pick of women, a good-looking guy like yourself. Why accost me?”

“So you think I’m good-looking?” he teased.

I rolled my eyes. As if he didn’t know how gorgeous he was.

“Why am I accosting you, then,” he continued. “You mean beside the fact that you’re beautiful, young, and detest me for reasons unknown?” His British accent made the question sound polite, friendly even, though the look in his eyes was anything but.

Tiffany Snow was born in St. Charles, Missouri, where she developed a fondness for trivia games, the music of Elvis Presley, and romance novels. After earning two bachelor’s degrees—one in social studies education and the other in history—she went on to work in the information technology field. Now, the author of the popular Kathleen Turner Series writes full-time, when she’s not quoting When Harry Met Sally or dancing along to her favorite ’80s hair band. She resides in the Midwest with her husband of eighteen years and their two daughters. http://www.tiffanyasnow.com