Release Blitz for TAKEN BY THE SHEIKH (#Giveaway)

Three sultry stories about three royal brother's is now available in Taken by the Sheikh! 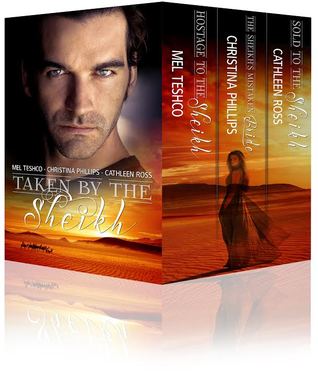 Bound by duty to honor their father’s dying wish, three royal brothers must marry their destined brides… by whatever means necessary…

Sheikh Shahzad Salah al Din doesn’t have time for hearts and flowers, not when his parents’ bodies are barely even cold in their graves and his country, Omana, is on the brink of revolt. He has to secure peace by honoring a long ago arrangement to make English rose, Lexi Galvin, his wife. The trouble is strong-willed Lexi isn’t aware of her royal Arab lineage let alone her destiny. There is only one way Shahzad can guarantee she will be his queen … and he isn’t above using force to get it.

In order to secure a powerful alliance for his country, Khalid has no choice but to marry a neighboring princess. It’s not what he wants, but duty must come before pleasure. Yet when he meets the beautiful Sanura he changes his mind… only to discover the virgin in his bed is not his destined bride.

He’d paid a fortune for his bride and he was determined to collect, whether she liked it or not. Rafi Salah al Din doesn’t trust easily. In charge of security for his country Omana, he devotes his life to duty. With his parents murdered it is his duty to stabilize his country by finding his parents’ assassin, marry and produce a son to ensure the Salah al Din line lives on. So why does the wife he bought disagree?


Christina, Cathleen and Mel have been good friends for years, so when Cathleen came up with the idea of us writing a box set together both authors jumped at the chance to create an exciting, interweaving story about three sheikhs finding love.

Cathleen loves writing for Harlequin and Escape publishing. Her latest release: Secret Housewives of Sydney: Nella has been described as the most shocking of the housewives. Of that she is very proud and glad she writes under an assumed name. When she's not writing for her publisher she's self publishing. Her latest self-published project is Highlander Romance. Click here for a free Highlander story.

Christina Phillips is an ex-pat Brit who now lives in sunny Western Australia with her high school sweetheart and their family. She enjoys writing paranormal, historical and contemporary romance where the stories sizzle and the heroine brings her hero to his knees.
Christina is addicted to good coffee, expensive chocolate and bad boy heroes. She is also owned by three gorgeous cats who are convinced the universe revolves around their needs. They are not wrong.