Today is the paperback release or Karina Halle's third and last book in The Artists trilogy - Bold Tricks! I promise, this one is coming off my TBR list and onto my READ list next year! 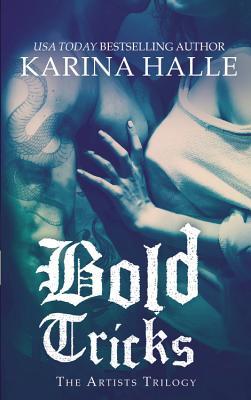 The Faster They Live, the Harder They Fall . . .

Raised by con artists, Ellie Watt has a lot of crazy childhood memories-but none crazier than being scarred with acid by the demented crime boss Travis Raines. Now Ellie is a full-grown woman who lives for revenge, and Travis is a full-blown drug lord who kills for pleasure. The sadistic bastard has kidnapped her good friend Gus as well as her mother, whom he's been holding as prized possessions in his heavily guarded lair. And Ellie has only one chance in hell of getting them out alive-using two dangerous men who love her to death . . .

One is Camden McQueen, a talented tattoo artist who's made a permanent mark on Ellie's heart. The other is Javier Bernal, her fiery ex-lover who's busted more than a few heads in his time. From the crime-ridden streets of Mexico City to the predatory jungles of Honduras, this unlikely trio forms an uneasy alliance in the deadliest game of all-a gun-blazing battle to the finish that will pit enemy against enemy and lover against lover. And Ellie must choose the right man to trust . . . or die.

My heart was an elevator car, the cable suddenly snapped, and I was freefalling and falling and falling as his lips and tongue and hot, wet mouth took away every inch of my resolve. The more he kissed me, the deeper and longer we found each other, the thirstier I got for him. I felt like if we stopped, I would die, empty on the inside and forever longing.


Don't miss the other titles in this edgy, sexy, action-packed contemporary romance series:

Karina Halle is a former travel writer and music journalist and the USA Today Bestselling author of Love, in English, The Artists Trilogy, and other wild and romantic reads. She lives in a 1920s farmhouse on an island off the coast of British Columbia with her husband and her rescue pup, where she drinks a lot of wine, hikes a lot of trails and devours a lot of books. http://authorkarinahalle.com/