Interview with author, Jayne Fresina of Sinfully Ever After (#Giveaway)

We have said it before, and we will say it again. We love female protagonists with brain cells! And our guest today has written another one. Welcome Jayne Fresina!

Lexi: When a reader picks up one of your books they know they are going to get well rounded characters. And in Sinfully Ever After, Book Club Belles Society #2, you give us Rebecca Sherringham...who is in a book club! So naturally she is a smart, amazing woman. What aspect of writing Rebecca was your favorite?

Thanks, Lexi. I always hope readers are going to enjoy my characters as much as I do! I loved writing Rebecca from her very first line because she is such a determined, fearless, take-charge sort. The people she meets in her story may not always like her, but she makes sure they can't ignore her. She's had a very adventurous life, traveling with her father and brother - trying to keep them out of trouble - and she's a very strong, capable young woman. The only thing she's really afraid of is finding romance. I had a great time writing her banter with "Lucky" Luke Wainwright.

Lexi: We love smart heroines, yes. But we also enjoy seeing them discover that when life is disrupted it can be a ton of fun. And Luke is the perfect person to disrupt the respectable Rebecca’s life. This Captain has returned from...care to share where he spent the past decade?

Colonel Lucius Wainwright (aka Lucky Luke) has been traveling abroad for a dozen years since he left England with the Nineteenth Dragoons. When his boots were discovered in a shack destroyed by cannon fire, he chose to let everyone think he was dead because he wasn't particularly proud of the life he'd led up to that point. He was also eager to escape family pressures. Money has never held much appeal for Luke and he decided his younger brother was a more worthy heir to the Wainwright fortune. Since then he's been working on ranches in Argentina and Brazil, where nobody could know his true identity and he was free to build a new life. I can't tell you why he suddenly decides to return to England. Readers will have to discover that for themselves!

Lexi: Filling in the gaps can be so fun. Even if you are not going to give us spoiler after spoiler. We forgive you because you keep writing these great HRs, have some more wine. Speaking of filling in the gaps, when you write do you have a basic plot line and then fill in with juicy stuff? Or do you basically know the whole story when you start out?

Well, that's a good question! Umm...is that Pinot Grigio nicely chilled? The thing is, I often start out thinking I know where the story is going, but invariably the characters will take that out of my hands. That's why I hate writing a synopsis before I start— although the publisher usually wants to see one. I just know the finished product is going to look very different to my original intentions. It took me seven years to finish my very first book because the plot kept veering off uncontrollably! I've become a bit stricter with myself now about plots and try to keep the characters relatively tamed.

Lexi: Will Sourcebooks let you say how many books are planned for the Book Club Belle Society? Sinfully Ever After is number two, will we get past three? Four? Five? I can keep going, really.

I would love to say how many, but I honestly don't know. That depends on the publisher. I have the first draft of book three written, but as of today no release date and no cover, so I can't even give you a hint as to when that one will be out. I'm on tenterhooks to see that cover! I have an idea for at least one more after that in the series, but again that depends on the publisher and the direction they take - and on what the readers want, of course.

Lexi: We will take as many as you can make! Congratulations on Sinfully Ever After! And a big thank you for stopping by today!

Thank you for inviting me! 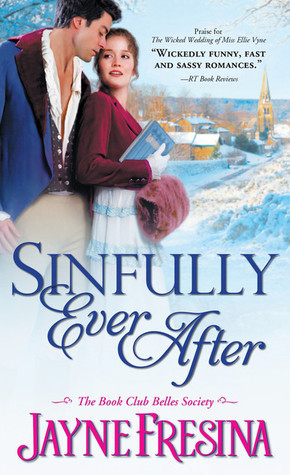 Teaching scandalous young men a lesson? This is not your typical book club...

To Rebecca Sherringham, all men are open books—read quickly and forgotten. Perhaps she's just too practical for love. The last thing she needs is another bore around—especially one that's supposed to be dead.

Captain Lucius "Luke" Wainwright turns up a decade after disappearing without a trace. He's on a mission to claim his birthright, and he's not going away again until he gets it. But Becky and the ladies of the village Book Club Belles Society won't let this rogue get away with his sins. He'll soon find that certain young ladies are accustomed to dealing with villains.


GIVEAWAY:
Sourcebooks is giving away one copy of SINFULLY EVER AFTER to one reader today (US/CA)! To enter, please leave a question or comment for Jayne and then fill out the rafflecopter below. Good luck!