We have an excerpt from J.C. Emery's upcoming release in her awesomesauce Bayonet Scars series - Crush! Enjoy and be sure to pick up your copy Monday! 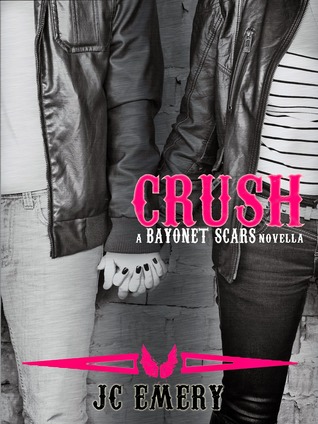 
Young love is always perfect. Until it's not.

Cheyenne Grady is a total daddy's girl to her bad-ass father, the Sergeant-at-Arms of the Forsaken Motorcycle Club. She's funny, and kind, and she just wants that deep, earth-shattering love like her dad has with her school secretary, Holly. But Cheyenne's been looking in the wrong direction, because the only good that can come from the way she looks at Jeremy Whelan is a lesson in heartbreak.

Jeremy always wanted to prospect for the Forsaken Motorcycle Club and wear the same patch as his father. When a life-long dream becomes reality, Jeremy realizes that the outlaw lifestyle is not for the faint of heart. Nor is it easy on relationships. He wants to be a good man, but temptation is everywhere.

Cheyenne is beautiful, and strong, and exactly what Jeremy could have forever. As long as he doesn't screw it up.

Love is never more powerful than the first time.

"You're throwing your future away for a boy who isn't going to give a shit in six months. You want me to stop getting in your business, then you need to start making better choices."
"You're wrong," I say through falling tears. "He loves me."
"I'll bet he thinks he does," he says. "But you're going to school. Holly has worked too hard to keep you on track for your education for you to throw it away because you want some asshole's attention. As it is, you had to get your GED because you couldn’t get your ass to class."
"It's not like that," I wail. I don't even bother to wipe the tears away. Every word he says is meaner than the last. They slam into my gut and practically pierce my heart one after the other.
He needs to stop before his words split me in two. Maybe if he knew the reason I missed so many classes he would understand. Maybe then he wouldn't look so disgusted with me. No, then I'd have to deal with the entire club's disapproval.
"I was eighteen once," he says. "It's always like that. He wanted your pussy, and now that he's got it, he's going to leave you behind. He's Forsaken now, Chey. He won't be faithful." Dad's words have fallen to a whisper. His shoulders have dropped and the intensity of the moment has passed. He just looks pained.
Good. Misery loves company.
"I'm not going to leave him no matter what you say," I mutter through a series of hiccups.
"You don't get it. It's painful thinking about going away, and I won't do it to him or to me. I love him, sometimes so much it hurts. It feels like it's crushing me from the inside out."

Don't miss the rest of the Bayonet Scars series!

JC writes adult, new adult, and young adult fiction. She dabbles in many different genres including science fiction, horror, chick lit, and murder mysteries, yet she is most enthralled by supernatural stories-- and everything has at least a splash of romance. http://www.jcemery.com