Adrianne Lee is back with the 4th book in her sweet and sexy Big Sky Pie series - DECADENT! 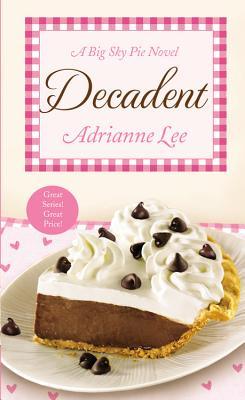 
Contractor Wade Reynolds is having a tough year. His cherry farm went bust, and his construction clients threaten to unhinge what's left of his sanity. But Wade's passion for life heats up when he's hired to remodel a new storefront next to Big Sky Pie -and he falls for the red-hot, bad girl who's setting up her catering shop there. Fresh off her own divorce, Roxy isn't looking for another relationship, just a spontaneous fling or three. Her contractor Wade looks as delicious as her specialty confections, but he's way too buttoned-up for a casual affair. Yet there's an ultra-sexy strength about him Roxy can't resist. What that man clearly needs is something decadent-like her...

She closed the gap between them, a smoldering light ablaze in her pale eyes.  “You really are gorgeous cowboy, and there’s no denying that some kind of electric storm is raging between us.  You feel it.  I feel it too.  And there is nothing I’d like more than to encourage you to act on how we’re both feeling.”  She’d backed him against the closet door frame.  “But you’re not ready to let go of the past.
“But if you were, I’d stand really close to you like this, and shove my hands into your hair like this, and pull your head toward me, and kiss you like this.”  She kissed his mouth, hard, not sweet or gentle as he was used to being kissed, but with a pressure that ignited a fuse in him.  Then her tongue was pushing inside his mouth, shocking him, the sensation at once foreign, yet damned pleasurable.
She pulled away, leaving him breathless, panting for more.  She was also breathing fast.  “If you were ready, I’d unbutton your shirt like this, run my hands up your back like this, and I’d tell you that just touching you makes me weak in the knees and crazed with desire.  And you’d push your hands under my sweater like this, up under my bra, to torture my tingling breasts.”  She shoved his hands beneath her sweater as she spoke, slowing, torturously bringing them to the rigid beads, the breasts were full in his palms, and an earthy groan slipped from between his lips.  She threw her head back and moaned, “Oh, my. . .”
“And if you were ready, I’d unbutton your shirt and pull it loose from your jeans, then slip my fingers through your chest hair—God I love a man with chest hair—and you’d put your hands on my bottom, like this.”  She placed his hands on her butt and pulled herself hard against his erection, their hips meeting, grinding, the need a pulsing, living entity.
She was kissing him again, working the buttons of his jeans.  He’d lost his mind completely, all he wanted was to be inside this woman with her legs wrapped around him, as he drove deeper and deeper.  But she was pushing back again.  Pulling his hands from her, pushing away from him, trying to catch her breath.  “It would be so nice, but you can see that it’s impossible, right?”
“No.”  He grabbed her by the waist, urging her closer.  “Why is it impossible?”
“On the surface, we’d be a perfect ‘friends-with-benefits’ couple, since I’m never falling in love again, never getting married again, and you’re still in love with your wife.  We’re both looking for someone who will satisfy that itch five or six times a month without expecting anything more than a romp in the hay.  I admit that it would be nice if that someone was a person I also had amazing chemistry with.  The kind we’re feeling right now.  But you’re not the kind of guy who has casual affairs.  If you were, you’d have removed your wedding ring long ago.”
His silence seemed to confirm it for her.
“Yeah, I thought so,” she said, looking sorry to be right.  “I hope your wife knew how lucky she was to have you.”
Lucky?  Wade almost laughed at the absurdity.  The only thing keeping his ring on his finger was guilt, and giving into his baser instincts with Roxy would only make the guilt worse.  But at that moment, he wanted to grab her and kiss her so damned bad, it was killing him.  Instead, he let her step back, watched her righting her bra and her sweater, her lips puffy and sexy as hell.
“I don’t know about you, cowboy, but make-out sessions always give me one hell of an appetite,” she said, a bit breathlessly.  “Let’s go get that steak Quint offered.”
Wade watched her sashay to the ladder and don her outdoor gear.  His considerable discomfort wasn’t allowing him to move just yet.  He had a hell of an appetite, all right.  But not for steak.


Adrianne Lee lives with her husband of many, many years on the beautiful Olympic Peninsula in Washington State in a pole barn building her husband transformed into an upstairs apartment with a shop below for his hot rods. Adrianne creates her stories on her laptop, in her recliner with her adopted cat, Spooky, curled between her calves, snoozing.  Over thirty years of summer vacationing in the Flat Head Lake area near Kalispell and Glacier Park has given her a love for all things Montana. http://www.adriannelee.com/