Megan Erickson will be releasing the third book in her new adult contemporary romance series, Bowler University next week. But we have a sneak peek for you today! 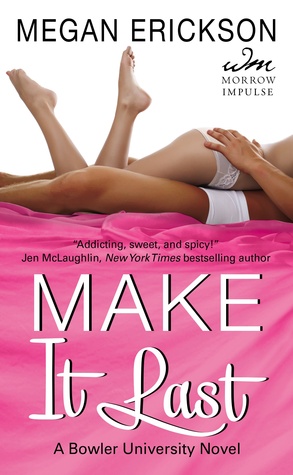 
After graduating from Bowler University, the last place Cam Ruiz ever expected to find himself is his hometown. A bad job as a bouncer and worry over his mom’s health make living in Paradise anything but. There’s only one thing that can make his return any harder—running into the only girl he’s ever loved.

Tate Ellison made a mistake when she was eighteen, one that cost her the best thing she’s ever had. She’s always hoped the regret of losing Cam would fade over time. Too bad it’s only grown. She took comfort in the fact she’d never have to face him again, so his presence in Paradise throws her for a loop.

The pull between them is instant and when the truth of what happened years ago tumbles out, they share a mind-blowing kiss...which leads to more. But the past has a way of repeating itself. When all the cards are on the table, Cam and Tate must decide what they are willing to do to make it last.

Tate leaned back then, and Cam gripped her biceps as she brushed the tears from her cheeks. “I thought, or at least I convinced myself that what we had wasn’t special,” she said, those eyes boring into him, daring him to look away.
He didn’t know where this was going. “Special?”
She bit her tongue between her teeth, then released it. “We were so young, Cam. I thought … I thought everyone loved like us. That strongly. That intensely. With everything they have.” She looked away then, her eyes blinking rapidly and her lips trembling.
He waited, unwilling to slice into this moment, because the truth hung in a precarious vapor between them.
She faced him again, eyes wet but more composed. “But now I know better. Boy, do I ever know better. If I had known what we had was so rare, I never would have let you go.”
And then that truth wrapped around them, securing them in a protective bubble, so all Cam could do was stamp this moment to make it real and true.
He pressed his lips to hers, and she sighed and shuddered beneath his hands. He nudged up with his chin and she knew what that meant, opening her mouth so he could delve inside.
That first taste of Tate was everything. Hot summers in the backseats of cars and licking drips of ice cream off her wrists and true, first real love.
She’d been everything to him. And now that he tasted her again, he knew that had never changed.


Megan Erickson grew up in a family that averages 5’5” on a good day and started writing to create characters who could reach the top kitchen shelf.

She’s got a couple of tattoos, has a thing for gladiators and has been called a crazy cat lady. After working as a journalist for years, she decided she liked creating her own endings better and switched back to fiction.

She lives in Pennsylvania with her husband, two kids and two cats. And no, she still can’t reach the stupid top shelf. http://meganerickson.org/