The doctor will see you now… 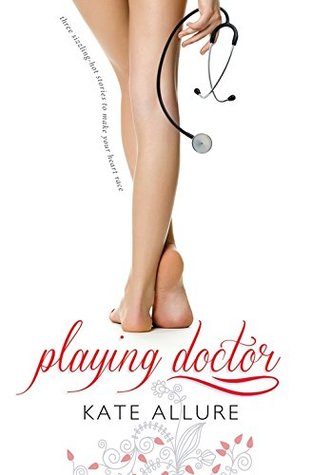 
The doctor will see you now…

In The Intern, the temperature of Dr. Lauren Marks' office quickly rises when her new medical intern, Courtney, turns out to be a passionate and sexy young man.

Valerie realizes all of her fantasies when her sexy surgeon and her loving husband team up to offer her some extra-special treatment in My Doctor, My Husband, and Me.

Nikki gets more than she bargained for in Seize the Doctor when the hot guy she recently met at a bar walks into her exam room wearing a white coat. Good thing she wore her sexiest lingerie.

At the door to her apartment building, they lingered and talked more while holding hands and looking into each other’s eyes. Hunter gently caressed her hand, making small swirling circles with his thumb on the soft pad of her palm. Nikki seemed as aroused as he was, her eyes dilated and her breath coming in short little pants. He very much wanted to kiss her and hoped she would let him. Nikki swayed toward him, and his arm came around to support the small of her back, gently pulling her against his body.

“May I kiss you good night?” he asked in a low, husky voice.

“Mmm, yes,” she replied, melting into him and tilting her face upward.

His heart pounding, Hunter slowly lowered his mouth to meet hers, just the gentlest sweeping touch on her lips. His breath caught in his throat as he stood wanting and needing more. Deepening the kiss, Hunter crushed her tightly to him and stroked her lips with his tongue. He was burning with desire and wondered for perhaps the hundredth time this evening if she was wearing those so-sexy underthings. Oh, how he would love to see them on her, to slowly peel them off her body and explore her with his tongue. Thinking that he was getting dangerously carried away, he started to pull back, but then Nikki parted her lips and welcomed his kiss into her mouth. Hunter pulled her even more tightly to him.

He could taste Nikki now, the subtle flavor of her mixed with the tangy beer they had consumed with dinner. The press of her breasts to his chest, her peaked nipples pressing into him, sent a shooting thrill throughout his body. His hand ached to reach up and caress her there. Before he got carried away, Hunter started to release her, but Nikki reached up and put her arms around his neck, pulling him back to her and deepening the kiss.

It felt so good, so hot. Hunter reveled in the sensations and the awareness that this gorgeous woman wanted him as much as he wanted her. His bulging erection pressed into her belly, and he could barely stop himself from rubbing it against her. Instead, he ended the kiss and stepped firmly away, feeling unstable, as if he might lose control and yank her back, and then nothing would be able to stop him from finishing what they were starting. He needed to get away quickly. He didn’t want to ruin things now.

“This was a terrific evening. Thank you,” Hunter said, turning away quickly, worried that Nikki might try to restart the kiss. Very much wanting her to do just that.

“I enjoyed it too. Bye,” Nikki responded, still leaning toward him.

“Thank you again. I’ll call you soon,” he said as he resolutely walked away.


Kate Allure is the creator of the Meeting Men series and Club Exotica. She has been a storyteller her entire life, writing plays, short stories, and dance librettos throughout her childhood and later for semi-professional theater and dance companies. Her non-fiction writing included working for American Ballet Theatre and New York City Ballet and authoring a weekly arts column for local papers. Beyond writing, Kate’s passions include traveling and exploring all things sensual with her loving husband. Follow Kate at on Facebook and at www.KateAllure.com.