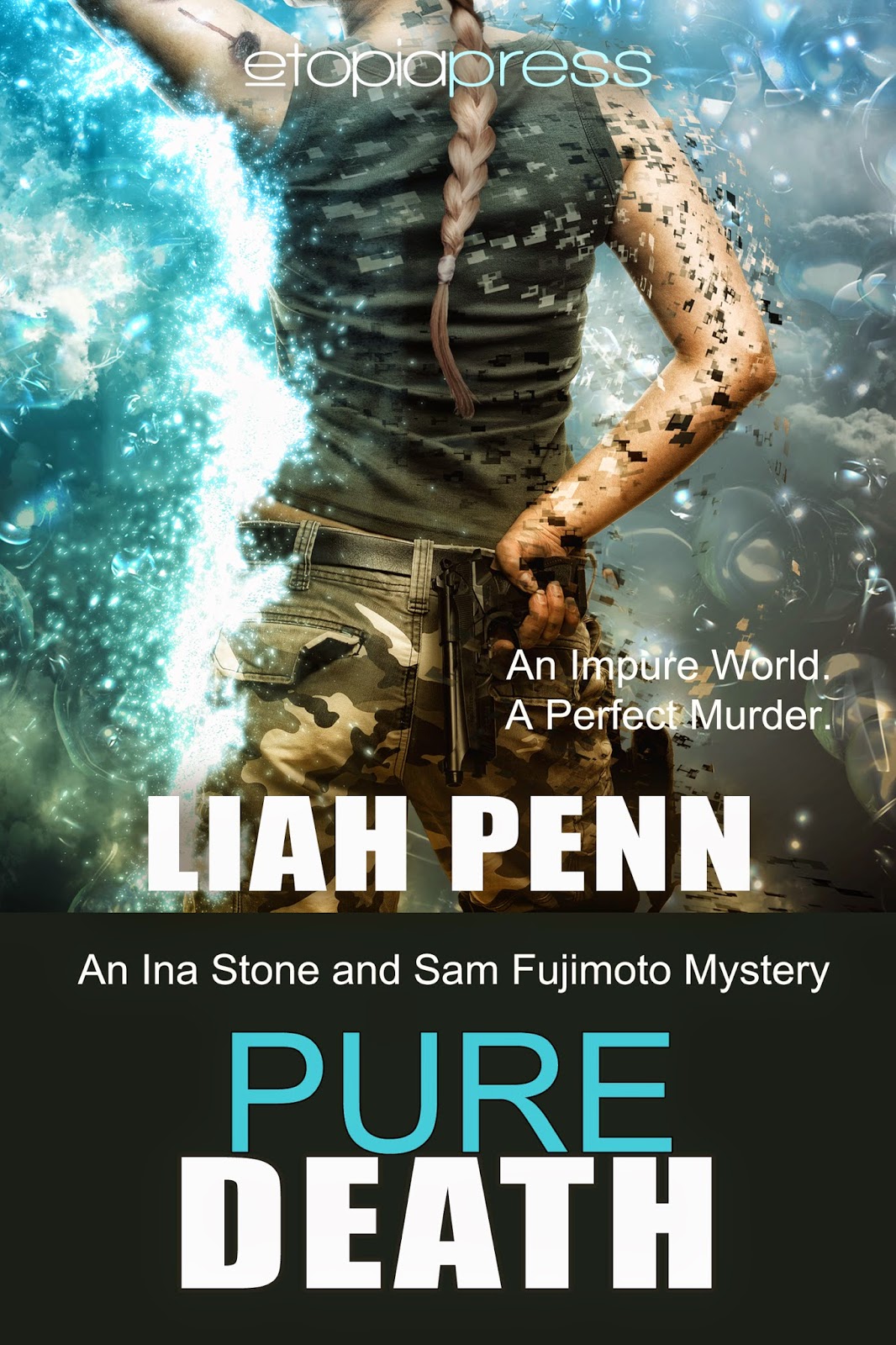 It’s not every day we get to celebrate a book’s birthday and the author’s debut...but we do today! Romantic suspense fans let me introduce you to: Liah Penn!

Lexi: Welcome Liah, I have a bottle of bubbly moscato to share in honor of your debut! An exciting day that we are glad you are sharing with us and our readers. Tell us, where did the idea for Pure Death come from?

Liah: Actually, the idea for Pure Death came from a conversation my son and I were having about the future.  I read an article about when amniocentesis first became available, and geneticists thought that things like Down Syndrome would be eliminated because parents would chose to terminate their pregnancies.  Of course, that hasn't happened.  The hadn't taken into account the human element.   Many, many parents have chosen to keep their child but have been thankful to amniocentesis because it prepared them for the unexpected.  I then did some research into Nazi-era Germany and the unintended consequences of a select group of people trying to create a "master race".   People are unpredictable.
Lexi: Human brains are programmed to want answers, that drives us to seek the truth and desire resolution. How has your background prepared you for writing this series?

Liah: My background as an attorney has me trained to search for the truth or at least an answer that can be explained.  Sometimes there is no answer. I have discovered that any person is capable of any thing when circumstances demand it.  I also have a good death of medical training which allowed me to discuss some of the medical issues and the autopsy scenes with authenticity.

Lexi: I am so intrigued by the idea of the Pures, and then you have a heroine who is impure and must follow the killer’s trail into their territory. Did you face any challenges writing Ina’s world?

Liah: Yes, I tried to imagine how Ina would cope with things one-handed.  She carries an illegal hand-gun, a gift from her mentor, a sort of equalizer. She lives in a dangerous area, she's petite, and she's only got one hand to defend herself with.  Ina is also smart, so she uses her brain, not her "brawn" to solve the mystery.  I had to constantly re-write scenes where I found simple things, like carrying coffee cups, to be impossible for Ina.

Lexi: I also can’t wait to read about Sam Fujimoto and find out what secrets he has. A rookie detective on this kind of case must have some amazing talents or hidden agendas. Care to spill any details about Sam?

Liah: First of all, Sam was inspired by a real friend of mine who tragically died in a freak gas explosion.  I was haunted by this for many years.  The creation of Sam, with my friend's physical characteristics, has allowed him to live on in my memory for a little longer.  Sam has a defect which cannot be seen and he finally confesses it to Ina well into the book.  As police officers, they must trust one another to "get their back" even with vulnerabilities that can't always be seen.

Lexi: That is a great character inspiration story, wow. Another wow is the cover for Pure Death, what a great visual. A book’s cover is a huge deal, do you feel that it portrays your vision of Ina?

Liah: I was thrilled with the cover.  Ina Stone is alone, has been alone for a long time, so her portrayal on the cover not only fits her physical characteristics, but also her solitary life.  Well, solitary, that is, until she meets Sam Fujimoto. . .

Lexi: I love the cover and am so happy for you. Thanks for stopping by the blog to share your debut with us, Liah! Congratulations and we hope to see you back with book two soon!

An Impure world, a perfect murder…
A murdered society debutante, her body sprinkled with 89 Costa Rican butterflies. A headless, gutted corpse washed up on shore with a beautiful, dead teenager. The case is anything but straightforward, and in an uncertain future, where resources are limited and the genetically defective are banished to a ghetto territory for Impures, Chief Detective Ina Stone and her partner, rookie detective Sam Fujimoto, must cross into Pure Territory to... find a killer. An Impure herself, Ina must overcome her defect. And when her life is threatened, she must learn to rely on Sam, whose interest in her seems more than just professional.
Yet the Pures may have created a world in which even they don’t want to live anymore. Resources have become too scarce to hide, and a black market for medicine comes to light. When a third murder is discovered, Ina and Sam know there’s a connection. With too many suspects and not enough time, they must find that connection before the killer strikes again.

Liah is offering up a copy of Pure Death to one lucky reader. To enter leave Liah a comment; do you love romantic suspense? Do mysteries keep the pages turning, or share your thoughts on the Pure! A random comment will be chosen one week from now.