Tyler's Undoing is out tomorrow and here is an excerpt to tide you over until then! 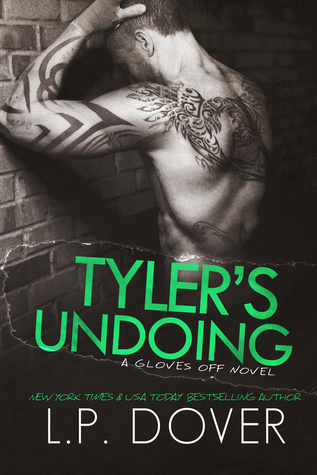 
She was what he wanted … but she was also his undoing.

Through mutual understanding, Tyler’s secret affair with Gabriella Reynolds has come to an end. It was a decision that not only saved their friendship, but it was one that would change Tyler Rushing’s life forever.

For the past couple of years, Tyler was known as being one of the UFC’s most memorable and sexy heavyweight fighters. Now he has the chance to win the title and claim the fame he so deserves. Having all the women he wanted was the highlight of his days; at least until Kacey Andrews walked through the door of his gym. He couldn’t keep his eyes off of her; there was an innocence about her that sparked his interest and he wasn’t going to give up until he had her. Little did he know that Kacey Andrews wasn’t a stranger … she was part of his world; he just didn’t know it. It was a secret she’d worked hard to keep hidden.

Kacey spent years trying to get away from the fighting world, away from the man who was hated among the MMA elite … her brother, Kyle Andrews. Unfortunately, she was brought back into it when Tyler’s relentless battle for her heart won her over, drawing her in. The only problem is that secrets never stay buried forever. In the end, Tyler will have a decision to make, and it’s one that could possibly destroy his and Kacey’s life … forever.

Spreading my legs with his knee, he smiled down at me and covered my body with his, leaning on his elbows to keep his full weight off of me. I was small underneath his body, utterly at his mercy. It was an archaic feeling, but I wanted him to take me, to claim me for his own—
leave his mark on me.
“I love the way you look when you’re happy, it’s breathtaking the way your face glows,” he claimed, brushing his fingers down my cheek. “However, your eyes are what I love the most.”
“Why is that?” I asked, kissing his fingers as be brushed them over my lips.
He brought his own gray gaze down closer and looked deeply into my eyes. “When I look at you, I see that light, beckoning me closer. It’s that light I’ve been so afraid will burn out if you let me in, but the more time I’ve spent with you, it’s only gotten brighter. I’m addicted to it … to you. These days I can’t seem to think of anything else.”
I felt the same way.
“And once you make love to me it’ll only get worse,” I admitted tenderly. “Is that a risk you’re willing to take?”

He lowered his lips to mine and I closed my eyes, loving the way my lips tingled every time they touched his. “Yes,” he answered. “I’d risk just about anything for you.”

USA Today Bestselling author, L.P. Dover, is a southern belle residing in North Carolina along with her husband and two beautiful girls. Before she even began her literary journey she worked in Periodontics enjoying the wonderment of dental surgeries.

Not only does she love to write, but she loves to play tennis, go on mountain hikes, white water rafting, and you can’t forget the passion for singing. Her two number one fans expect a concert each and every night before bedtime and those songs usually consist of Christmas carols.

Aside from being a wife and mother, L.P. Dover has written over nine novels including her Forever Fae series, the Second Chances series, and her standalone novel, Love, Lies, and Deception. Her favorite genre to read is romantic suspense and she also loves writing it. However, if she had to choose a setting to live in it would have to be with her faeries in the Land of the Fae.