Love thrillers AND romance? Well then you'll want to check out this new release! 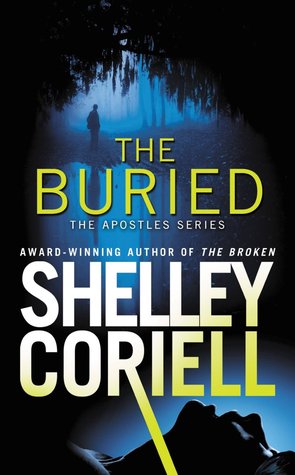 
Secrets from the past.
Voices from the grave.
Because nothing stays buried forever...

Cypress Bend, Florida, is a small southern bayou town filled with long-buried secrets. It's also the home of successful, fiercely independent state prosecutor Grace Courtemanche, who's pulled into a world of terror and self-doubt when she receives a phone call from a young woman buried alive.

In a race to stop a revenge-seeking killer, Grace unearths skeletons from her past along with feelings for the one man she swore she'd never need again, Theodore "Hatch" Hatcher, a rootless, smooth-talking FBI crisis negotiator who's back in Cypress Bend to deal with a secret of his own.

Hatch slipped his gun into the holster at his back and walked up the steps of Grace’s back porch. Instead of going inside, he settled his elbows on the rickety railing and stared out at the black. Like the young women buried in those wooden coffins, he and the others trying to crack this case were in the dark. The splintered wood dug into his elbows.
But his team was at his back. Jon was in the middle of the hunt. Hayden, a world-renowned criminal profiler, was walking in a killer’s shoes and getting into the twisted place that was this unsub’s head, and Berkley was giving the killer a face. He smiled. And maybe he’d call Evie, the SCIU’s bombs and weapons specialist. His fiery little teammate had a way of lighting things up. Grace had called the group he worked with his family. He’d always called them his team. They were the men and women he’d fight for and put his life on the line for. Wasn’t that what one did for family? Wasn’t that what he was doing for Alex? For Grace?
His head lolled forward and hung between his forearms. The steamy swamp was clouding his brain again, blurring and tumbling his truths. The first time here the fog had been so thick he couldn’t see anything beyond Grace.
A wedge of light cut across the porch, and Grace’s bare feet padded across the rough boards. She joined him at the railing but said nothing.
He aimed his interlaced hands at the pitch black night. “No bogeymen.”
More silence. She was probably thinking again. About Janis’s fight for her life, about the killer’s next move, about old bones. Grace didn’t know how to unwind and shut down, something that usually came as natural as breathing to him. He sucked in a long breath of warm, soupy night air clogging his throat.
Grace raised an arm, her fingertips sliding down his back, the touch so light it may have been more about him wanting her touch than her actual touch. Shifting so she stood behind him, she ran her other hand down his back. He pulled in a breath, the air sliding through his lungs now lighter and sweeter and cooler. Her fingers brushed along his waist and slipped under his shirt, skin settling on skin.
Every muscle in his torso tightened, trapping the sweet breath in his lungs. And still her fingers traveled, gliding along his ribs, across his chest. His lower body stirred. She pressed against his back, her thighs and midsection molding to his. This time his lower body quaked, sending a tremor to his brain.
He settled his hands over hers. “Whoa there, Princess.” He spun so they were shadowy face to shadowy face. “What’s this all about?”
Grace’s tongue darted over her lips, more nervous than naughty. “Bacon.”
He blinked. “Bacon?”
She knotted her fingers in the bottom of his shirt. “Bacon, Theodore. I am bacon. You are bacon.” With each line, she drew him closer. Her teeth dug into her bottom lip. “You do like bacon, don’t you?”
“It’s…uh…nice. I’m partial to hickory smoked. With grits. And eggs. Over easy.” Easy. Yeah, it would be so damned easy to pull Grace into his arms. He jammed his hands in his pockets because letting them slip across Grace’s skin would take them to a place neither one of them needed to go.
Grace’s lips curved in a soft smile. She rose on her toes, her breath fanning his neck, his jaw. Her hands, her mouth, her words, everything about Grace was so soft and easy. The fog. Must be the fog. A gauzy steam blurred everything but the woman before him. Too close. She was way too close.
He unclenched his hands and settled them on her arms. “I’m not sure what this is all about, but last time we talked about this, about us, forever wasn’t on the table, at least not for me, and that’s still the case.”
“I know.” Her sweet breath danced across his skin.
“Damn it.” He pushed her away, out of arm’s reach. He needed space between them. An ocean would be nice. “Then why are you doing this?”
She closed the space between them in half a heartbeat but didn’t touch him. “Because old dogs die and newborn babies never get a chance to live.” Her lips trembled. “And because someday soon you’ll sail off into the sunset.” She lifted her hands in surrender. “And there isn’t a damn thing I can do about it, any of it. So until then, Hatch, I’m going to make the most of every moment I have with you, and according to Allegheny Blue’s vet, that means having an extra slice or two of bacon.”

A former newspaper reporter, magazine editor, and restaurant reviewer. These days Shelley writes smart, funny novels for teens and big, edgy romantic suspense. A six-time Romance Writers of America Golden Heart Finalist, she lives and loves in Arizona with her family and the world's neediest rescue Weimaraner. When she's not behind the keyboard, you'll find her baking high-calorie, high-fat desserts and haunting local farmers markets for the perfect plum. http://www.shelleycoriell.com/