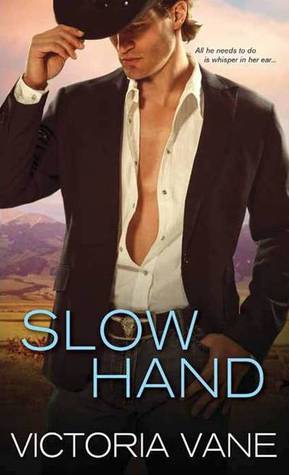 In rural Montana...
Wade Knowlton is a hardworking lawyer who's torn between his small-town Montana law practice and a struggling family ranch. He's on the brink of exhaustion from trying to save everybody and everything, when gorgeous Nicole Powell walks into his office. She's a damsel in distress and the breath of fresh air he needs.

Even the lawyers wear boots...
Nicole Powell is a sassy Southern girl who has officially sworn off cowboys after a spate of bad seeds-until her father's death sends her to Montana and into the arms of a man who seems too good to be true. Her instincts tell her to high tail it out of Montana, but she can't resist a cowboy with a slow hand...


Thoughts:
"Does misfortune follow you everywhere, Miz Powell?" "Not normally," She pursed the lips that he found increasingly fascinating. "Why do you ask?"
"Because I'm thinking it might be prudent for me to increase my insurance before I drive you anywhere."

SLOW HAND by Victoria Vane is the first book in her new Hot Cowboy Nights series.  This was the second book that I've read by Victoria.  I had previously read THE SHEIK RETOLD, her excellent re-telling of E.M. Hulls' THE SHEIK, and absolutely inhaled it.  SLOW HAND marks Victoria's first foray into contemporary western romance.  It is the story of Wade Knowlton, a driven lawyer with reluctant ties to his family's Montana ranch, and Nicole "Nikki" Powell, a southern "peach" who has sworn off cowboys after being burned too many times.

Wade was one sexy cowboy! I fell in love with him from the beginning when he generously gave up his airline seat for damsel-in-distress Nikki. Even though he was bone tired with an early morning meeting the next day, he was a true gentleman electing to drive rather than fly.  He was sensitive to others and more than willing to go the extra mile when needed.  He was his own man.  He supported his family even with his brother's blatant in-your-face attitude.  I want a Wade for my own!

Nikki elicited my sympathy for the first part of the book.  Her estranged father had died;  She hated to fly;  She'd had a rotten childhood;.  Her boss was a turd.; She'd had terrible experiences with men. But Nikki said that Wade was obviously not like the other men she'd known.  In her own words, she thought:  It wasn't just great chemistry; he was everything she'd ever dreamed of - big, strong, intelligent, compassionate, sexy, and with a great sense of humor.  So... what the heck was the problem?  As a result of her determination to think the worst of Wade, I, unfortunately, went from sympathizing with her to tolerating her the last half of the book.  She was bipolar;  She'd be all over Wade one minute, then pushing him away, aghast he'd touched her, the next. I really wanted to like her since Wade, who had placed the stars in the sky for me, obviously cared for her.

"Have no fear, cowboy," Nikki replied in a tone meant to disguise the warm flush that had come over her. "I corralled all my wild impulses long ago."
"Did you, now?" He still stood in the doorway, head cocked. "Somehow, I think you may have missed a few strays."
---

She looked from Wade to the rifle and back again. "Not as long as you know how to use that thing." When he cocked a brow Nikki couldn't resist the urge to add, "Just 'cause you've got the tool, doesn't mean you know how to use it."
"Don't worry, sweetheart," he replied with a dangerous look. "I know good and well how to use all my tools. But if you need convincing, I'm happy to demonstrate."
---

"Then swear you'll make this so damn good I won't regret it in the morning."
His mouth molded into that sexy, dimpled grin. "Darlin', the only thing you're going to regret is putting me off for so long."

The Montana small-town setting lured me in right away.  Victoria's descriptions of scenes, the old western towns with their fake facades, the remoteness of the roads and land, the wildlife and more kept me riveted through-out.

One of my favorite scenes was when Wade and Nikki stayed the night in a rough cabin. Oooh la la!  It was cold outside but anything but within!  I also enjoyed learning the ironic history of Wade's office building;  It had once been Miss Ruby's boardinghouse - so he practiced law in a former bordello. :-)))

I love books that educate me with trivia.  In SLOW HAND, I learned that many lottery winners end up bankrupt!  When I first read that, I thought no way!  But, upon researching further, I found that roughly one-third of lottery winners find themselves in serious financial trouble or in bankruptcy within five years of turning in their winning ticket.  Wow...

It appears that Victoria has at least three more books planned for this series, ROUGH RIDER, SHARP SHOOTER, and SILVER TONGUE!  ROUGH RIDER will feature Dirk, Wade's brother, who was quite the despicable character in this book. He definitely needs a makeover;  I'm so glad he's getting his own book.  I can't wait to read it!!
Victoria's writing is top notch with crisp storytelling, well-defined characters and a solid plot.  I wish I'd taken to the heroine, but I did not.  If you are hankering for a good western romance with a very lovable cowboy, SLOW HAND certainly fits the bill!