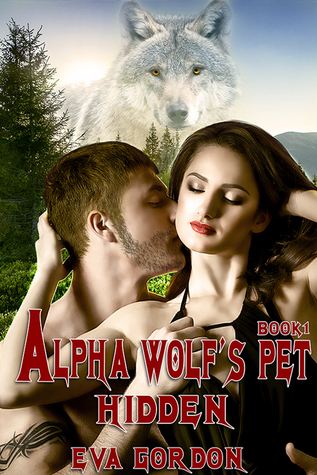 
Mia’s testimony against Russian mobsters forced her to enter the witness protection program. She is relocated to a quaint cottage in Wolf Woods, near Mt. Rainier, far from everyone and everything she loved and cared for. All is calm, until she meets Dominic, the gorgeous ruggedly handsome owner of the mysterious Wolfe Estate. He is all alpha male, domineering, and controlling. The last thing she needs is to get involved with a sexy control freak.

Alpha werewolf, Dominic Wolfe, is the packs’ enforcer. When an attractive young woman moves into a cottage near his territory; his senses are heightened to obsessive proportions. A human pet to meet his desires.

Dominic is determined to unveil Mia’s real identity while keeping his own securely hidden. Haunted by the howls and shrieks coming from Dominic’s estate, Mia wonders if she can really trust the enigmatic man she suspects of wanting a dominant-submissive relationship. A man who brings out her darker desires. Will hidden danger keep them from gratifying their burning passion?

Mia sipped her fresh cup of coffee and smiled. “No, thank you, I’ll order it online.” She paid for the pancake mix and syrup. As she turned to leave, she crashed into a hulk of a man. Her steaming hot coffee splashed over the man’s shirt. “I’m so sorry.” She looked up and gasped... “So…sorry.” She lost her voice on seeing Dominic Wolfe. Not in a business suit but wearing a black flannel shirt and blue jeans, looking more like a cowboy than a business tycoon. Ten degrees hotter.
He stepped back and patted big broad hands at what must be a smarting burn on his broad chest. He laughed. “Don’t be, I shouldn't have been standing so close.”
Mia blushed. His deep masculine rumble sent shivers down to private parts of her body. “It must have burned.” The right thing to do was to remove his shirt and check the burn. Then what? She had no first aid skills. Maybe the coffee had not been that hot, or his thick shirt had protected him from being scalded.
“Nah, it was not that hot.” He chuckled.
“I’m so mortified.”
“I’ll get you a towel, Mr. Wolfe,” said the young man behind the register.
Dominic called, “No really. I’m all right.”
The bagger returned from the storeroom with a wet rag and mop. “No problem, Mr. Wolfe.”
“Come on, Jeff. Call me Dominic.” He took the towel and patted the stain.
He lowered his head. “Yes, sir.”
Dominic gently pulled her away and Jeff mopped up the mess. His touch ignited a small flame of desire not lit in over a year.
Mia straightened. “I’ll pay to have it laundered.” She met his dark amber eyes, speckled with gold flakes that gave him a feral look. His smoldering eyes were so intense, she immediately averted hers. It was as if he would see her thoughts. Holy hell is he hot.
He picked up her fallen grocery tote and handed it to her. “It’s just coffee, Miss…?”
“Mia Attwood.”
He smiled. “Mia is Spanish for mine.”
His deep rumbled pronunciation of Mia sent a shiver of pleasure down her spine. More like missing in action, because he makes me lose my mind. She must look like a deer caught in the headlights and focused on his features. A trimmed beard on his chiseled handsome face, the kind of face that commanded armies, rescued hostages, and obviously never flinched under torture. Definitely former military.
He offered his hand. “Dominic Wolfe.” His gold-speckled eyes twinkled in mischief. “You’re Ellen’s new neighbor.”
She clutched her grocery bag. “Yes, I thought you looked familiar.”
Dominic raised a brow. “Uh, huh.”
His tone condescending as if he spoke to an insane person. Her red cheeks disclosed her lie. “You were dressed differently.” Duh! Now he probably thought she had the IQ of a snail.
“I was on my way to a business meeting.” He tilted his head, his lips twisted in a bemused smile. “It appeared I frightened you. Although, you probably wanted to run in and fix your hair.”
Mia narrowed her eyes. As if. “My hair was fine.” Nothing wrong with a ponytail. She couldn’t tell him he looked like a hit man. Yet, now in person and dressed down in blue jeans that hugged powerful legs, there was something unnerving about him. His presence even caused the bagger to act subservient. It was more than the fact he was filthy rich. He was an arrogant prick. “I left my stove on and my tea kettle was whistling.”
Dominic chuckled. “I didn’t take you for a tea drinker, especially with latte all over my shirt.”
Mia hated tea. Was he a mind reader or just a lucky guess? “I didn’t say I was making hot water for tea.” She glanced at her watch. “I shouldn’t hold you up.” She bit her lip and smiled. “Again, sorry about your shirt.”
“Wait.” His masculine all alpha male tone sounded more like a command than a request. Yet, one she wanted to obey. As though he used some sort of Jedi mind trick. Maybe because when he stared, he never blinked.
She turned. “What?”
“I owe you a fresh cup of coffee.”
“No really, you don’t.” She squirmed as his smoldering eyes compelled her to obey.
Dominic laughed. “I promise. I won’t bite.”
Before she could argue why she couldn’t let a sexy rich guy buy her a cup of coffee, he seized her grocery bag and then wrapped his arm about hers.


Eva Gordon writes genre bending paranormal/fantasy/steampunk and historical novels with a strong romantic element. She loves to create stories that combine her passion for mythology, steamy romance, and action/suspense. Her imagination takes her from one universe to the next. Thus far, she has several series lined up as well as single titles waiting in line for production.Eva has a BS in Zoology and graduate studies in Biology. When not in her den writing, she can be found teaching animal lore at writing conventions, at work at the raptor rehabilitation center, wolf sanctuaries, or to satisfy her inner Hemingway on some global eco adventure.