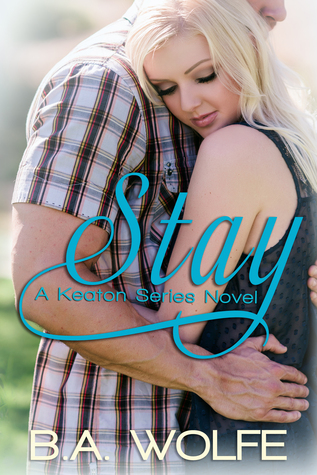 Fate took Cassandra down a path she never expected.

Then a small town in Colorado gave her exactly what she needed—until tragedy left her heartbroken and devastated. Alone with only her child and her memories, Cassie struggled to put her life back together, one day at a time, piece by piece. Finding love again was something she never thought possible. That was, until she ran into an unlikely stranger who flipped her entire world on its axis.

Aidan had a secret locked away in his heart; one that would surely send Cassie running the second she discovered it. He held onto her closely and kept his secret guarded, but one careless mistake could reveal all.

Their friendship was strong, their moments beautiful, and the love that brewed between them intense—something neither denied. The only problem? Cassie was slowly letting him into her life. Could she let herself get close to the one person she didn’t think she should?

“Alright.” He raised his brow as he walked over to the nightstand, writing something on the notepad. “Here’s my cell number, call me if you need anything. I only live about ten minutes away. Seriously, if you need anything, just use the motel phone.”I took the ripped piece of paper he handed me. “Thanks.” I knew I needed it so I could talk to him about my car, but that’s as far as it would go.“I mean it, anything,” he said as he walked to the door, resting his hand against the frame. “Can I get you something before I leave? Dinner?”
“No, I’m not hungry at all, but thanks for offering. I think I’m ready to get some sleep,” I admitted.
“I’ll keep you posted about your car,” he said.
“Thanks,” I said, thankful that I would get to see him again, but feeling like a mixed up basket case for not trusting him. I was a freaking mess.
“Goodnight Cassandra,” he said quietly before closing the door and walking away.
Yeah, right. Goodnight in this place was going to be hard to come by. I locked the door after he left and walked over to the bed. I drew the covers back and found exactly what I’d pictured… Stains. Gross. I pulled the covers back over the bed and decided to sleep with a towel over me instead. I walked into the filthy bathroom, quickly grabbed a towel, and ran back to the room like a scared child. I put on a pair of yoga pants and a t-shirt and was ready to get some rest. It had been an unusually long day between the long drive, the accident, and the hospital. Too exhausted for continued thinking, I let my brain off the hook and laid down on the hard mattress. As I pulled the towel over my body, I noticed my feet were going to be hanging out all night. Great.
I gently laid my sore head back onto the pillow and blinked my eyes a few times. I was right. Sweet dreams were extremely hard to come by in this place, but I tried. I closed my eyes and fell asleep.
Based on the way I felt the next morning, I’d gotten only a few hours of sleep at the most. Between the noises, the creaks, and the foul smell, I didn’t know which was worse. That was, by far, the worst night’s sleep I’ve ever had. The morning sun shone brightly through the yellowed curtains, and I decided to give up on trying to get any more sleep.
I ripped the towel off of me and was about to put my feet on the floor and there it was. Staring back at me as if I were invading his turf was an over sized, nasty, grey rat. “OH MY GOD!” I screamed as I jumped up and stood on the bed, unsure of what to do if he were to start climbing up. I let out another loud scream as it raised itself up with its beady little eyes staring, making it scurry off under the bed. This was even worse; now I couldn’t see the damn thing.
I jumped off the bed and collected my belongings faster than I even realized I could. I threw on a jacket before making a mad dash for the door, slamming it behind me. “Holy shit, that was gross,” I said breathlessly. I took a moment to compose myself, and to think about what to do next. I was not going back into that room. That was for certain.


“Are you looking for a place to stay yet?” I heard his familiar voice from afar. I peeked over the railing, and there he was standing with his arms crossed, wearing a sexy grin, faded jeans, and a tight white tee.

B.A. Wolfe is a girl with a passion for reading and writing, and lives in the good ol’ state of Colorado with her husband (her biggest cheerleader), and her two crazy min pin fur babies. These days, her life is anything but calm, and there isn’t one thing she’d want to change. B.A. spends all her free time either furiously typing stories on her laptop or happily reading through her endless TBR on her Kindle. Her list of favorites would be long enough to fll a book, but most would likely fall under the romance category. She is a sucker for a good love story that makes her cry, and an amazing book boyfriend who will melt her heart. ‘Away’ is B.A. Wolfe’s debut novel.