The End is the Hardest Part to Write


Writing the end of a trilogy is hard. Not just for the usual reasons – endings are never easy for me to get right, and I can’t begin to tell you how many times I’ve had to backtrack and rewrite them, or find them buried 15,000 words earlier in the manuscript. But also, after publication, because there are other people out there, rooting for your characters, with ideas and hopes for how it will all wrap up – and as the author, you don’t know what they want to happen, and even if you did, you can’t really make your choices based on what one fan, or a handful of fans hopes for. You have to let the story be the story, the characters be the characters, and just kind of... pray that the natural conclusion is going to find some sweet spot of making everyone happy.

Basically, before BEYOND FATE, I’d never written a book in which I was worried about disappointing anyone but me.

It’s a big difference, and a lot of pressure. It’s putting out a book that has the Big Final End on it, and knowing that no matter what you might have written, some people are going to hate the choices you made. And those people are going to be a subset of the same fans who have been supporting you from the first book. Your staunchest and most loyal readers and supporters! And of COURSE you don’t want to let them down. You want them to love the end as much as they loved the beginning!

But there are no guarantees. Reading is such a personal experience, and no two people read a book exactly the same way. We all bring something different with us to the story, and as the writer, I can’t control at all what the other end of the experience will look or feel like. I can have good intentions, and still fail to connect. And with a first book, it’s always going to be a mixed bag. But by the third, by the final installment, the people who are still reading, who have stuck with you all that time... they deserve something satisfying at the least, and ideally, awesome.

For those of you who have fallen in love with Fate of the Gods, I did my best to stay true to both the characters and the story. And I love it. I love the book I wrote and the way it all ends.

I can only hope now that you will, too.

But writing endings when there are people waiting and eager to learn what happens – Hooooooo Boy! 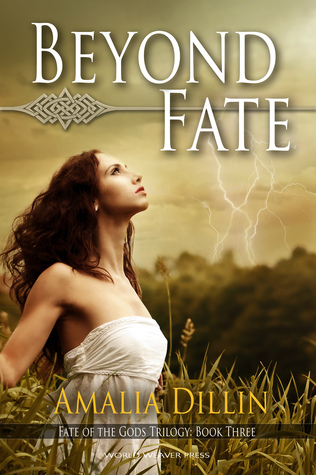 
When Adam left Eve, abandoning his wife and their newborn daughter Elah, he thought he was saving the world. But he hadn't counted on the influence of Michael, twisting Elah's love for her parents into paranoia, or the slow, leaching death of the world she rules. How could he have known the blame for the world turning barren would fall on Eve?

Eve only had two years to teach her daughter love, to cement Elah's sense of morality and ensure the safety of all Creation. Even with the help of Raphael, Elah is becoming her father's daughter, a master manipulator, and she's determined to have her way, even if it means betraying her own mother's trust.

With Loki and the Aesir gone, Thor thinks he’s protected Eve from the ravages of Ragnarok, but there are forces in play even the gods can’t see. When Thor arrives in Eve's next life, offering her everything she ever wanted from Adam, and more — eternity without death or rebirth, and the freedom to live outside of her daughter's reach — Eve is more than tempted. Being part of the world has grown physically painful. If she can escape to Asgard, maybe she can live again. Maybe she can love again.

But can the world survive with only Adam to protect it?

Get the entire Fate of the Gods trilogy!