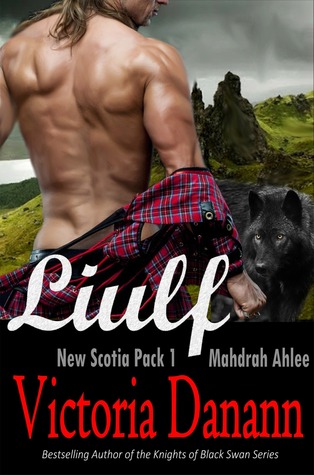 
WHEN HE COULDN'T FIND HER IN HIS WORLD, HE WENT ELSEWHERE.
First of a series of three novellas about the Brothers Cu Ahlee.


USA TODAY Bestselling author, Victoria Danann, wrote this series as a follow up, based on Moonlight, Best Vampire~Shifter Novel of 2013.
For hundreds of years the Scotia wolves have lived in the Highlands and enjoyed the protection of the Fae Monarchy, but the world is changing and the straining population compels the werewolves to adapt. Or die. Or MOVE.

What reviewers are saying about Liulf:
"Victoria Danann has done it once again. I could not put this down until I was finished. It moved along at an amazing pace that was just perfect, the characters will grab you and you cannot help but fall in love with them and the story. Wow, this is an amazing read."- Joy Whiteside

"I got so lost in Luilf's world I forgot mine." - Pam James

"...fulfills that hunky shifter kilt hunger from the get go." - Nelta Mathias Baldwin

"As always Victoria Danann hits it out of the ball park with another amazing story." - Bobbi Kinion

Liulf squatted on the castle parapet with his back to the sound of the ocean crashing against Girnigoe’s black craig cliffs. If he let himself think about the damp cold or the January wind that tried to penetrate flesh and bone, he’d start to shiver in a way that would rack his whole body…. So he’d learned to focus on other things. Looking east, over the land he loved, he felt a sense of pride and history. And memory. In his slightly less than four hundred years, he’d covered every inch of pack territory in wolf form and much of it in biped form as well. He knew he was blessed with good things, but that didn’t fill the underlying emptiness that he couldn’t quite pinpoint. Lack of purpose maybe. There wasn’t much satisfaction in guarding a border without an aggressor.

That very day a wolf had said it was easy for Liulf to make reckless choices because he didn’t have a mate. Liulf had kept his face passive, but inside the words had stung. It wasn’t as if he could control destiny. What Lycan didn’t want to find his mate? Well, perhaps Conn would prefer to be a bachelor wolf forever.
It was true that Liulf could have settled for a bitch who was merely compatible, as most did. But he hadn’t because he knew there was more. There was mating that was, well, magical. He wouldn’t say so out loud because his brothers would never stop razzing him if he did. But he lived with a constant yearning that never subsided, spoken or not.

All the carousing in the world wouldn’t take the edge off his desire. And he should know. All he had to do was keep from cursing the Fates until they saw fit to gift him with the one. The one he knew was out there.

USA Today Bestselling Author
2013 Winner in the categories of:

My early work (eight-years-old) would be called fan fiction today. I began by writing my version of Bobbsey Twins novels on legal pads that my dad brought home from the office. As an only child - in the days before children became little electronic receivers - there was often not much to do other than seek amusement in my own head.

Childhood fantasies involved being the only girl (for some odd reason) at a ranch for wayward boys. Yes. I do realize this sounds vaguely familiar. T hose fantasies were supported by real life events because the boys included me in the afternoon neighborhood games whether it was cowboy/Indians or G.I. Joe.

When I left the Bobbsey Twins behind I didn't write again until I was married with children and in my mid-twenties. I completed a paranormal romance and gave it to my spouse to read. After hearing his criticisms I didn't write again for decades. At the time I didn't understand that he's the absolute farthest thing from my audience.

It turned out to be a blessing because during that time that I didn't write, I lived an extremely full life. I traveled a lot, raised a family, got an education (I have an M.A. in Psychology.) and explored my compulsion to be a spiritual seeker. The fantasies were a constant companion throughout. The faces and names of the characters changed as I matured, but they remained a source of comfort. T hey helped me through hell raising teenagers and three near-death scares.

By the time I started writing again, I had something to say. I write cross-genre with uniquely fresh perspectives on paranormal creatures, characters, and themes. Add a dash of scifi and a flourish of fantasy to enough humor to make you laugh out loud and enough steam to make you squirm in your chair. My heroines are independent femmes with flaws and minds of their own whether they are aliens, witches, demonologists, psychics, or past life therapists. My heroes are hot and hunky, but they also have brains, character, and good manners - usually - whether they be elves, demons, berserkers, werewolves, or vampires.

If you're interested in me personally, I am also a classically trained musician who defected to Classic Rock. This is Roadhouse, the very best in Classic Rock, taken near The Last Concert Cafe, Houston Texas, 2011. I'm the utility player which means I play rhythm guitar, keyboards, sing back ups and a few leads. I authored and illustrated Seasons of the Witch calendars and planners for fifteen years. I live in T he Woodlands, Texas, which is why I sometimes joke about being the witch in the woods. Married. Four children. One very smart, mostly black German Shepherd dog.