Release Day Launch: Three and Out by Meghan Quinn

Congratulations to author, Meghan Quinn, on the release of her third book in the Love and Sports series - THREE AND OUT! 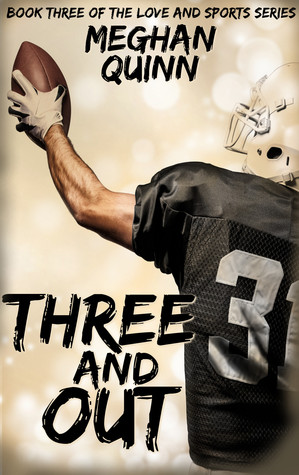 
Piper was dead to him.

The minute she walked out the door on Mason, he was done.

Now, three months later, he’s still trying to act like he doesn’t care. Like his heart hasn’t been torn into shreds and obliterated beyond recognition.

But it’s not working.

He’s broken and beyond repair.

Mason tries to show the world he doesn’t care, but his world is flipped upside down.

A vulnerable Mason finds help in an unexpected place and it’s an offer he can’t refuse.

Three and Out runs through the lives of Mason and his friends while they struggle to find love and keep it in their hectic, crazy, drama twisted lives.

Not everyone is meant to be and not everyone who you think should be together, will end up together in the final installment of the Love and Sports series.

"Woah, careful there."
"Damn, wet floor. Like mopping is going to make it any better looking."
Jax's ears perked up at hearing a familiar voice.
He lifted them both up so they were standing.
The woman was brushing off her navy blue, hip-hugging skirt, so he couldn't tell who it was, but when she looked up, Jax instantly knew why he recognized the woman's voice. "Brooke?"
Her eyes widened, and then recognition fell over her features.
"Jax. Wow, never thought I would ever cross paths with you again. How's it going?"
"Alright, and yourself?"
As Brooke talked about her new clothing line and her little apartment in downtown Denver, Jax took her all in.
Her hair was short now, just below chin length, and styled to frame her face.
Her body was the same rocking figure he remembered from when he met her at the bar, that awkward night his boys and Jake Taylor all hung out before a pre-season game, and for some reason, her eyes were brighter than he remembered, as if she was breathing a new life.

Check out books #1 and #2 in the Love and Sports series!

When I was in high school I occasionally read books but was consumed by other teenage things so I didn’t take the time to appreciate a good book on a cloudy day, wrapped up in a blanket on the couch, besides “The Notebook” I made time to read the heartbreaking novel. It wasn’t until I received a Kindle for Christmas one year that my world completely flipped upside down. When looking for books, I came across the Contemporary Romance genre and was sold and I haven’t turned back since. You can either find my head buried in my Kindle, listening to inspiring heart ripping music or typing away on the computer twisting and turning the lives of my characters while driving my readers crazy with anticipation. I am currently residing in beautiful Colorado Springs where the sun is always shining and there is a trail waiting to be hiked on every corner. I share a lovely and warm home with the love of my life and my five, four-legged children.