Release Day Blitz: By the Magic of Starlight by Serena Gilley (#Giveaway)

Serena Gilley has a new release to share with you! 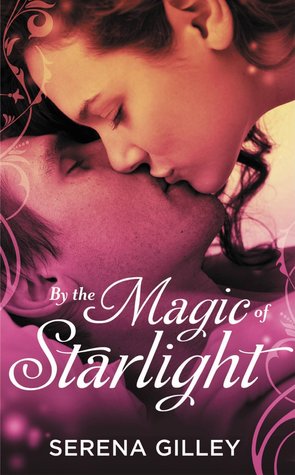 By the Magic of Starlight
(The Forbidden Realm 0.5)
by Serena Gilley
Published October 7th 2014 by Forever Yours
Goodreads | Amazon | B&N | ARe

Beyond the limits of sight, magical beings live in the Forbidden Realm. The two worlds were once connected, but the desires of man forced their separation. Now, desire may bring them back together . . .

Raea is a fairy with a secret. Beneath a veil of moonlight and mist, she did the unthinkable: shared a night of exquisite passion with Kyne, the fairy-human hybrid whose touch makes her tremble. Now she can't forget the feel of his hard body and hot kiss against her skin. Their connection is undeniable-and forbidden.

Kyne's hunger for Raea is insatiable. As a fairy, he should be beyond the lure of lust, but as a man he can't resist the pleasure only she can provide. Yet if the Fairy Council is correct, their love will unleash a secret with the power to destroy the Realm forever . . .

Excerpt:
She could feel the heat radiate from his warm summer body. She was becoming mesmerized by his deep amber eyes as they held her with every bit as much intimacy as she felt in his touch. She was falling into the swell of desire that always threatened to take her over when Kyne was near. She was allowing herself to be seduced.
“I love the way you respond to me, Raea. I can see in your eyes that you want me the way that I want you.”
“It’s dark out here. How can you see much of anything?”
“I don’t need my eyes to know how you feel, Raea. I can hear desire in your voice, I can sense it on your skin, I can feel it in the air as you breathe.”
He was right. She could sense all of that from him, as well. His touch was igniting passions inside her as his fingers trailed over her arms, her back, her tingling breasts where he pushed her clothing aside. Desire was, indeed, a sixth sense of its own and she was learning to understand it quite well.
“Besides,” he added, bringing her closer to him. “We have magic. We can feel things, do things the mundane world only dreams of.”
He was right about that, too. They had magic. But by the Skies, that’s what made this so very wrong, so dangerous. They were entwining magic with passion and history had proven their Realm couldn’t withstand that. Not for very long, anyway. She knew for herself she was already teetering on the edge, ready to fall hopelessly, helplessly into some great abyss. Her control was in shreds. How could she hang on if she let this continue?
She couldn’t. That much she knew.
“We can’t do this, Kyne,” she said, unable to push him away.
“We can and we have, Raea,” he said, leaning in to press his scalding lips to her neck. “And you want us to do it again.”
“No, it’s forbidden. Passion and magic cannot intertwine. We have to stop now.”
“We didn’t stop before and nothing bad happened.”
“But it will! I can feel it. We should never have permitted ourselves to give in to desire, Kyne. It was dangerous; foolish. It’s how the—” She stopped herself before she said more than she ought.
Too late, though. He understood what she’d been thinking.
“That’s how the humans live?”
“I didn’t mean—”
“Yes, of course you did,” he said, standing straight and letting his arms drop back down to his sides. “And you’re right. It’s the worst sort of human weakness.”
“We aren’t like them, Kyne. We just can’t be.
“You mean you can’t,” he corrected, and rightfully so. “I can’t very well help being like them.”
“You’re half fairy; focus on that. You don’t have to give in to your human side. Come on, Kyne. You know what could happen, how important this is.”
“Is it, Raea? Is it really as dangerous as the Fairy Council keeps telling us? Is the Veil so fragile that a little bit of forbidden passion might tear it down forever? I don’t believe it.”
“Passion is human, Kyne. It can’t mingle with magic. That’s what will tear down the Veil.”
“It’s not human! By the Clouds, Raea, you felt it, too. I know you did. How is that, since you’ve no human blood?”
“But you do! It’s because of you, Kyne. I felt what I felt only because of you, never for anyone else.”
That had been the wrong thing to say. She could feel the heat radiate off him, could see his wings beat faster and a flame ignite behind his eyes. She could sense the passion rise up within him. Clearly he liked hearing that he made her feel things no one ever had. And now she was feeling those things once more. Her own heart beat faster, blood pounding through her body. Infuriating fairy! She could not let herself get caught up in this again.
“The world did not end because of what you felt, did it, Raea?” he asked softly.
“Stop it, Kyne. You know it can’t be.”
“I know it can, and I know you want it to be. Just as badly as I do.”
“No! Our people gave that up generations ago. Passion brought nothing but trouble into the Realm; there’s good reason it’s so very forbidden. And with your history, Kyne! If we get caught you’ll be… No, I can’t let that happen. There’s too much at stake. If you can’t control yourself, I can. And I’m saying no.”
But he was still close to her, his essence still affecting her ability to think straight. His body was changing, too, losing some of its delicate fairy elements and appearing larger, solid, more human. The passion roared inside her, knowing just what wonders he could do with those human attributes he possessed. It took everything she had not to flutter into his arms and let his humanity sweep her away.
“I could make you say yes,” he whispered, one golden hand reaching out to touch her, to caress her cheek so very gently.

Her eyelids drooped and she pressed into that caress. His heated skin felt so good against hers, the electricity between them fueled by so much more than mere magic. Did she dare let herself give in? She wanted to. Badly. She wanted to take what he offered and let herself revel in it, forgetting all about rules and risk and the horrible consequences they could both face.

Serena Gilley grew up reading fantasy and fairy tales, and believing there was a distinct possibility that both of them were real. Somewhere. Even all these years later, Serena's belief in magic and mystery hasn't diminished. In fact, She is living out her own happily-ever-after with a handsome prince in a beautiful castle, taming dragons and granting wishes every day.  Okay, so the prince is a regular guy, the dragons are really just teenagers, and the wishes she grants are as spectacular as frozen pizza on Friday night, but it's a fantasy world just the same. http://www.serenagilley.com/