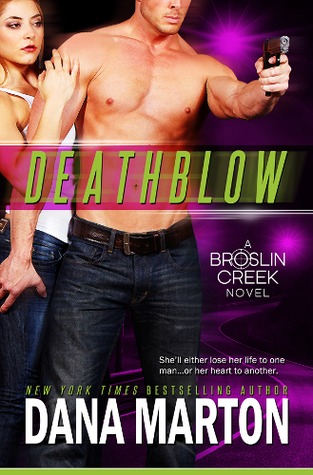 
Former small-town football hero turned cop, Joe Kessler never met a linebacker, perp, or a woman he couldn't handle. Then a troubled single mom walks into his life, and the only place this hot jock will ever see 'easy' again is in the dictionary.

Hiding out in Broslin, PA was working pretty well for Wendy Belle until Cop Casanova took her under his protection. Now she’ll either lose her life to one man, or her heart to another.


Linda's Thoughts:
His last encounter with Wendy... Hell, she'd been the one to hurt his feelings.
The best sex of his life, and she'd kicked him out as soon as it was over, told him not to bother with calling because it was strictly a one-time thing. Told him, actually, while he'd still been inside her.
He groaned at the memory as he slipped behind the wheel, turning on the heat the second he had the engine started.
His day was shaping up to be an ass kicker. Which was saying something, considering that the day before included his arrest, a concussion, and a near drowning.

DEATHBLOW by Dana Marton is a very good romantic suspense read!  It's the fourth book in Dan's Broslin Creek series. Each book in this series features a different officer in the small town Broslin Police Department as a lead character and each has their own stories, so any of them can easily be enjoyed as a standalone out of series order.

DEATHBLOW is a fast-paced, intensely realistic, action-packed thriller with a compelling romance featuring Wendy Belle as the damsel in distress heroine and Joe Kessler as the sexy law enforcement hero.

Wendy had moved to New York at a young age to become a model. It was a rough life and she'd gotten involved in an abusive relationship from which she was still trying to extricate herself from. She had a young son - fathered by the abuser. She had just one friend left, Sophie, who we met in book three, DEATHTRAP. When Sophie walks in on a violent altercation between Wendy and her abuse, Sophie insists that Wendy escape to Sophie's house in Broslin, an offer that Wendy reluctantly accepts. If you have read book three in the Broslin Creek series, you'll recognize Sophie. She is in a relationship with Broslin's Chief of Police Bing.

As Wendy moves to Sophie's house in Broslin, Bing asks Joe to protectively shadow Wendy for the next couple of days until he can figure out how to ensure Wendy's safety. The only problem is that Wendy doesn't like Joe. They had a brief hot fling three months ago which did not end well. Joe hasn't been with another woman since; He still can't stop thinking about her - but Wendy had been adamant that she didn't want to see him again. Now Joe and Wendy have to work it out as he has to be in the same house with her to keep Wendy safe from her ex. Will Joe be able to walk away when all is said and done?

I liked both Wendy and Joe... a lot!  They were genuine down-to-earth characters who seemed so real - shaped by fears, past heartbreaks and betrayals. The chemistry between them was sizzling but it appeared that their pasts wouldn't allow them to pursue a relationship. In the beginning, Wendy had a low opinion of herself. I loved seeing her develop a backbone as the story progressed. She's a great mother but she needed to learn how to trust in herself and others. Not everyone is as contemptible as her ex.

Joe was the town's high school football hero. Now he's the town's untarnished golden boy - liked by everyone, a very good cop with an undeserved reputation of being a Casanova. He's definitely a swoon-worthy character and hero extraordinaire in my book!

The villain was veritably despicable with severe psychological control issues; He made my skin crawl. Reading about violent abusive relationships is difficult. Dana handles it well. I actually learned about common tell-tale signs of an abusive relationship from denial of a problem, to self-image issues, to the person being abused believing that they provoked or deserved the abuse. Thankfully, the total focus of the book is not on abusive relationships as there are sub-plots with gangs, a murder to solve, humorous elements and a not-to-be-missed sweet and hot romance, but I hated the way the villain terrorized Wendy for a good part of the story. On the good side, I was so glad to see Wendy take her life back - bit by bit - and start to move on as her social safety net strengthened.

The man's gaze hesitated on the four-inch cut on Joe's left cheek, courtesy of the log that had slapped him in the face on the river. With twenty-some stitches sticking out, the wound looked like a giant red caterpillar was crawling across Joe's face.
"Well, that'll disappoint the ladies." But then the captain grunted. "Never mind. With you, they'll probably like it, think it's all manly." He peered behind Joe. "Anyone naked in there?"
Joe stepped aside. "I'm having an off morning."
---

Wendy Belle wasn't the type of model foreign princes married. Yes, tall and graceful, but she didn't radiate a Grace Kelly-like cold beauty. Her lips were too sensuous for that, her eyes too mysterious. Her face was beautiful and perfect in its own way. More than beautiful - interesting. She was the type of woman a man could look at for a lifetime and not get bored.

One of my favorite scenes occurred in Joe's home on his couch. No sex, but lots of cuddling and some humorous dialogue. The sweetness was mesmerizing and left me and Wendy, it seems, with a smile. You can get a taste of the humor from the following excerpt:

"It's all messed up," she said.
"What is?" he asked quietly from behind her.
"Us."
"We're doing okay."
"I didn't set out to trap you or anything." Keith had accused her of that a hundred times.
"I don't feel trapped."
"Why?"
"I'm a simple guy. I have a beautiful woman in my arms. What's there to complain about?"
"I'm hardly beautiful. I look like an eggplant."
"Purple is my favorite color."
"There's a really annoying dinosaur you might want to watch with Justin over breakfast." But she smiled into the darkness.

I love Dana's writing. It's first-rate, as always. She a master at keeping the adrenaline climbing with plenty of mystery, danger, romance, and heat!

You will most definitely want to read DEATHBLOW in one sitting. I have to confess that I was totally caught off-guard with the surprising twists at the end! Wow! If you're looking for a book with a rich storyline, breathtaking action and romantic suspense that keeps you turning the pages until the very end, then I'd highly recommend DEATHBLOW!

A Huge Thank You to the author, Dana Marton, for donating her Broslin Creek series to my local library. :-)