I love an alpha male, I have to admit. But there are so many kinds of that kind of hero . There’s the domineering hero who runs over everyone, including the heroine. He might be sexually dominant, too. Those guys are fun, though I don’t normally write them (I had one in A Measure of Deceit). I prefer, actually, the kind of alpha male who I wrote in this latest book, The Other Duke.

Rafe is a wild child alpha hero. He has confidence and swagger and he expects that things will work out his way. He really can’t picture a situation where he can’t win. And that’s why it’s so fun to throw things like an unexpected inheritance of a dukedom AND a wife (Serafina McPhee). Set a man who feels he’ll always win on his head and wow, that is a fun interaction to write.

As for heroines, I like women who I’d want to be friends with. Some of them are very broken by their pasts, but they are at their core decent, smart, funny and steadfast. I think the heroine I’d want to be friends with most is Annabelle, Rafe’s sister in The Other Duke (who will get her own book, The Scoundrel’s Lover in March 2015). She’s a woman ahead of her time and I think she’d be a hoot to go play with.

So my question to you is, what kind of heroes/heroines do you like best? Any heroines you’d like to hang out with for the day? 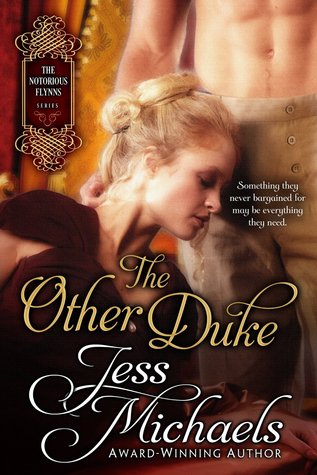 The Other Duke
(The Notorious Flynns #1)
by Jess Michaels
ebook, 240 pages
Published January 13th 2015 by The Passionate Pen

For years Serafina McPhee has been engaged to marry the heir to the Duke of Hartholm and for almost as long, she has been struggling to find a way out of that engagement. When he suddenly dies, she does not mourn but thrills at the idea that she will be free. Unfortunately, best laid plans go awry when the next in line for the title, her intended’s cousin, Raphael “Rafe” Flynn is forced to take over the engagement. But Serafina knows Rafe’s reputation as a libertine and wants nothing to do with him, either, even if he is devastatingly handsome.

She proposes an arrangement: she will agree to the marriage and provide Rafe with his heir and spare. Once she has done her duty, he will let her go. Rafe is intrigued both by her beauty and by her utter disgust with the idea of being his bride. Women normally fall at his feet, not cringe away from him. However, since their arranged marriage is not something he can escape, he agrees to her terms.

But when he finds out on their wedding night the truth about her torture at the hands of his predecessor, he finds himself driven not just to fulfill his bargain with his new bride, but to introduce her to desire. While they move closer together, surrendering to wicked pleasures, dangerous emotions may violate every agreement they’ve made.