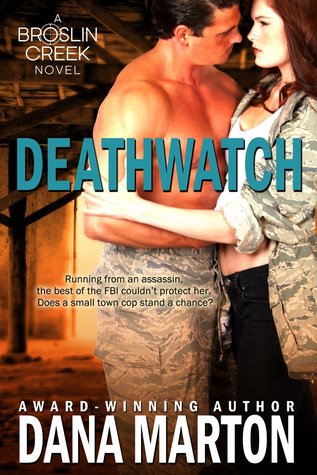 
As the only person who can identify the most notorious hit man in the country, Kat Bridges is running for her life.

Murphy Dolan is in the Army Reserves, returning from his 2nd tour of duty, only to find a stranger hiding in his house. She's scared spitless. He's completely burned-out on violence. Neither of them has any trust left to give.

If the best of the FBI couldn't protect her from the country’s most notorious assassin, does a burned-out small town cop have a prayer?

Linda's Thoughts:
Kate Bridges thought attending her own funeral would be the hardest part....

DEATHWATCH by Dana Marton is a fast-paced, action-packed story that made it hard for me to breathe more times than I could count. It teems with hot, sexy romance and gripping suspense. It's the first book in the author's awesome Broslin Creek series and the only one of the books available in audio at the time I listened to it. It takes place over a span of just a few days and was an excellent listen; I ate it up!

The story opens as Kate is observing her own funeral. She had witnessed a murder and is now hiding from the most notorious hit man in the country after the killer tried to take her out also. When her FBI protection fails to protect her, she barely escapes with her life. On the run, she lives off the grid, moving frequently from town to town, determined to stay alive and to keep the family she left behind off the killer's radar.

She is currently in the small town of Broslin renting the home of a soldier on active duty. The problem is that he's not on duty any longer - he's actually come home. He was injured in Afghanistan and is craving peace and quiet, totally unaware that his home has been rented. When the beautiful woman in his bed refuses to leave, he's not happy, but he can see that she's scared. His protective instincts surface just as the villain's next attack is on the horizon.

I loved both Kate and Murph. Kate had a terrible childhood but she's grown into a strong-willed woman with a feisty outlook and a tender heart. I chuckled every time she uttered her favorite expression, "sweet cocoa-bean heaven" as I'm a chocoholic too.

Murph, our uber sexy hero, is the epitome of what every woman would want in a hero. He's a sweetheart. He aspires to return to his law enforcement job in Broslin as soon as he recovers from PSTD and his physical injuries. The chemistry between Murph and Kate is beyond sizzling. They seem made for each other - whether they accept it or not.

Down to nothing but his ACU pants, he dragged his tired, aching frame into his bedroom, then pulled up short at the sight of a nearly naked woman in his bed. He blinked.
"What the hell?"
Her long legs tangled in the sheets, her mess of reddish-brown hair half across her face. Her white nightgown, nothing but a scrap of fabric, looked shrink-wrapped around her torso and hips. He caught her scent, a faint trace of old-fashioned roses, sexy and somehow homey at the same time.
He stared, suddenly wide awake and then some.
Even the pain in his shoulder stopped pulsing.
As a welcome-home present, he approved 100 percent.
Except for the screaming.
---

She'd been on the run for too long, fear becoming her norm.
But for this moment, she wasn't alone. And focusing on Murph helped her forget her own troubles a little. Then, as minutes ticked by, her fingers gliding along his skin, over hills and valleys of muscles, something strange happened.
Her fingertips tingled. His heat somehow spread up her arm and spread through her. So completely unprofessional. She squeezed her eyes shut. She was better than this. He might not have been her patient officially, but she was doing this to help him....
"Thank you." His voice, raspy with desire, skittered along her skin. "It's much better."...
But before she could rise, he sat up, legs apart, and she suddenly found herself kneeling between his powerful thighs, his heated gaze holding her. He shifted forward while reaching for her at the same time, his large hands warm on her arms, titting her closer to him. She had zero will to resist. Every cell in her body screamed for him.
He held her a hairsbreadth from his lips. Then his eyes darkened, and he closed that minuscule distance, their lips meeting at last in the lightest of touches. Even so, an electric charge shot through her, short-circuiting her brain.
She wanted more, with a deep, aching need. She could have cried when he pulled back an inch.
"I want you." His voice had turned hoarse."
---

Talmadge Ragan, the narrator, did an excellent job at bringing the characters to life. Her voice was very clear and distinct. She made it easy to differentiate between the characters. I could feel the characters' tension, fear and desperation in her articulation - perfect for this thriller. Her performance kept me spellbound to the story from the beginning to the end. I would not hesitate to pick up another book performed by Talmadge.

If I had any complaint about the book at all, it was that the ending left Kate and Murph's story partially unresolved. I'm thrilled to report that in Broslin Creek book #5, BROSLIN BRIDE: GONE AND DONE IT, DEATHWATCH garners its own better-than satisfactory closure in the Epilogue. What a wonderful surprise that was! It was perfection! I'm happy dancing all over the place!!!!! Thank you, Dana! So... don't lose faith and think that Dana will leave Murph and Kate's story hanging... Just keep reading the series - Each book has been a treat. You'll be so glad you did!

Dana's writing was excellent, as always. Dana's stories are always fresh and original with twists and turns that I never see coming. In this book, you have a scarred woman attending her own funeral, an injured war hero returning home and a crazed assassin - the combination makes for a wild thrill ride for sure! Can Murph keep Kate safe when the FBI could not? You have to listen to or read DEATHWATCH to find out!