Happy release day to the fabulous Marie Force! FATAL SCANDAL is a Romantic Suspense novel being published by Carina Press, and the eighth novel in Marie’s Fatal Series! 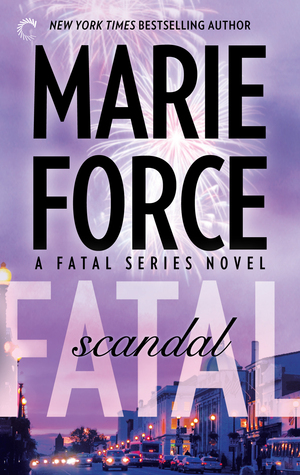 As a new year dawns in the capital city, dual scandals rock the Metropolitan Police Department—and Lieutenant Sam Holland is right in the middle of them. Chief Farnsworth is catching heat for the way he handled a recent homicide investigation, and Detective Gonzales is accused of failing to disclose an earlier connection to the judge who decided his custody hearing.

When Gonzo's fight for his child turns deadly and he has a shaky alibi, Sam must defend two of her closest colleagues. All while her husband, Vice President Nick Cappuano, settles into his new office at the White House.

Nick begins to wonder if the president is using him for a political boost, and his worries mount over a complication in the plans to adopt Scotty at a time when Sam is being put through the wringer by the always-rabid DC press corps. As the evidence against Gonzo piles up, Sam suspects someone is gunning for her—and her team.

Read how Nick and Sam's relationship began in Fatal Affair

Don't miss the rest of the Fatal series!

With more than 3 million books sold, Marie Force is the New York Times, USA Today and Wall Street Journal bestselling, award-winning author of more than 30 contemporary romances. Her New York Times bestselling self-published McCarthys of Gansett Island Series has sold more than 1 million e-books since Maid for Love was released in 2011. She is also the author of the New York Times bestselling Fatal Series from Harlequin’s Carina Press, as well as the Treading Water Series and numerous stand-alone books. All You Need is Love, book 1 in her new Green Mountain Series from Berkley Sensation, was a New York Times and USA Today bestseller in February. The second book, I Want to Hold Your Hand, will be out in June, and the third book, I Saw Her Standing There, is coming in November. In 2014, Marie will have eight mass-market print releases—the first five Fatal Series books from Harlequin and the first three Green Mountain Series books from Berkley. While her husband was in the Navy, Marie lived in Spain, Maryland and Florida, and she is now settled in her home state of Rhode Island. She is the mother of two teenagers and two feisty dogs, Brandy and Louie. https://marieforce.com/