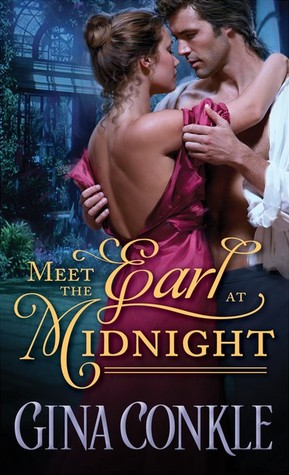 
It's going to take a Beast to tame this Beauty

Enigma Earl. The Phantom of London. That's what the gossip pages call Lord Edward Greenwich, a mysterious nobleman who doesn't show his face in London Society. With a reputation like that, no wonder Lydia Montgomery is horrified to be dragged from bed and packed off to live with him to save her mother from penury.

While Lydia has received all of the training a lady should endure, she's decidedly un-ladylike. She despises her corset and isn't interested in marriage. She'd prefer to remain unmarried and spend her time improving her art. But if she wants a chance at happiness, she'll have to set aside her fear of the earl and discover the man hiding behind the beast.

Will Edward and Lydia's greatest discovery be each other before time runs out?

The warm wool blanket dropped to the floor, and Lydia set her hand in the earl’s firm grip. She stuck her foot outside, but awareness wasn’t with her. That cavernous black doorway claimed her attention, and therein was her problem. Trouble came in mere seconds, as it usually did for her. The step was slick. She slipped. The sole of her leather shoe slid off the step’s edge. “Oww!” she yelped as her foot banged the graveled drive hard. Legs buckling, down she went, like a graceless sack of flour. What’s worse, she slammed into the earl, her shoulder punching his midsection.

“Ooomph!” Lord Sanford grunted but moved quickly to save her from falling all the way to the ground. Her face mashed against leather and linen. Strong hands held her arms. At least she didn’t knock the earl down. Grabbing for purchase, her fingers touched warm wool…buttons…skin. Her face pressed into fabric, she murmured, “I’m so very sorry.” Lydia tried to right herself, but relief turned to horror: she was a mortified eye level with the pewter buttons of Lord Sanford’s breeches.

MEET THE EARL AT MIDNIGHT by Gina Conkle is a wonderful Georgian romance  reminiscent of one of my favorite fairy tales, Beauty and the Beast. This fractured re-telling is the story of Lydia Montgomery, our feisty heroine, and the "Phantom of London" Lord Edward Christopher James Sanford, the ninth Earl of Greenwich,, our scarred and emotionally bereft hero. Edward was an enigma who shunned society. Like the Beast, Edward only showed his true self to those close to him and he rarely left his castle.

The tale begins with a clandestine meeting that snared my attention right away. Lydia's wily stepfather and brother had been caught embezzling from Lord Greenwich's business, Sanford Shipping, where they were both employed. In lieu of pressing charges and having Lydia's family put in debtor's prison for their crimes, Edward agrees to an exchange involving forgiveness of their thievery for Lydia as Edward desperately needs an heir. But, no one told Lydia of any of this prior to the meeting.

I really liked both Edward and Lydia. They were similar in many ways. They came from different social classes, but neither gave much credence to society's rigid definitions. They were each free spirits who enjoyed their independence. Each was driven by a purpose; Edward's was botany science and Lydia's was art. However, both were so intensely passionate about their separate interests that a compromising middle ground in which their interests could co-exist and they could each find happiness did not seem attainable, but I held out hope.

I have to credit this books with piquing my interest in botany and art.  I find myself looking at art differently now, as it was explained in the story that there is a difference between looking and seeing just as there is between studying and learning. AND my curiosity demanded that I look up one of the plants that was featured in the tale.

One of my favorite scenes occurred near the beginning of the book. The quote shared at the beginning of this review occurred right after the clandestine meeting and had me laughing out loud. Lydia is tired and stressed after the late-night meeting and Edward has insisted that she accompany him to her new home directly. Lydia loses her footing as she exits their carriage which leaves her in a compromising position.

Lydia swayed into him, her back arching, but his hands caught her. His warm hand splayed wide against her upper back. The other ventured lower, massaging circles, lower, lower. Edwards’s hands, like his kisses, belonged to an explorer, not a ruthless conqueror. Testing and checking, his firm but gentle caresses enticed her into his web of curiosity and question. His kisses, his touch were not the rehearsed moves of a long-practiced rake, but genuine affection and sensuality braided into an explosive mix that promised to incinerate them on the spot if they didn’t stop.
---

He gripped her hips, and standing up, slowly pushed volumes of silk with him. Blue fabric puffed and pillowed between them. His hand traced a slow caress the length of her from knee to hip. Edward’s nostrils flared, as did his eyes, when his roving hand slipped behind her, grappling bare skin. She quivered from tantalizing male touch exploring forbidden flesh. Lydia read Edward’s face, the flush of tanned skin and mouth unable to close, as knowledge seeped into his brain: she’d said her vows, eaten dinner with the utmost decorum, and chattered politely with all and sundry in this secret state of undress. Edward groaned and jammed her body hard against his. “You’re naked under your skirt.”

Marian Hussey, the narrator, did an excellent job at bringing the characters to life and capturing the essence of the characters.. Her accents and mannerisms enhanced this delightful tale. She differentiated well between the characters making it easy for the listener to know who was speaking from her voice. I had never listened to anything Marian had narrated previously, but I would not hesitate to pick up another book that she has narrated.

This was the first book I've ever read or listened to by Gina; I will certainly pick up others by her in the future as it was quite the entertaining read and her writing style was very engaging. I really enjoyed the way she seamlessly combined humor and their romance that alternated between sweet, hot and something in-between. With great atmosphere, clever, witty dialogue, well-defined, genuine characters with great chemistry and a rich plot, this tale will keep readers spellbound up to an exciting, heart-stopping, but very satisfying ending. I highly recommend MEET THE EARL AT MIDNIGHT to anyone who enjoys sensual historical romances.