Character #Interview: A Sorceress of His Own by Dianne Duvall (#Giveaway)

From the Bestselling author of the Immortal Guardians series comes a new paranormal historical romance that inspired it all, and is sure to enchant fans new and old!

Thank you for joining me!  I’m very happy to be here today, celebrating the release of A SORCERESS OF HIS OWN, the first book in my new series The Gifted Ones and my first historical romance.  Every time a new book releases, I like to introduce readers to the characters they’ll find in it via character interviews.  While many authors interview their characters themselves, I prefer to let my characters interview each other . . . which poses an interesting challenge for me this time.  Men and women in the middle ages didn’t interview each other for e-newsletters, so I’ve decided to let Sheldon (a popular human character in my Immortal Guardians paranormal romance series) interview Marcus (a powerful Immortal Guardian), because Marcus appears in A SORCERESS OF HIS OWN as a teenaged squire.  :-)

Sheldon:  Thanks for doing another interview.

Marcus:  Why exactly are we still doing these?  I thought they were to make the humans who work for us at The Network feel more at ease around us.  Haven’t the other interviews helped us on that front?

Sheldon:  They did for a while.  But recent events have . . . sort of freaked everyone out at The Network.

Marcus:  I assume you’re talking about—

Marcus:  I suppose I can understand that.

Sheldon:  So we’re starting the interviews up again.

Marcus:  All right then.  Ask me whatever you’d like.

Sheldon:  You’re an Immortal Guardian now, and have been for centuries.  But, you were different even before you were transformed into an immortal.  Can you tell the newbies at The Network a little bit about that?

Marcus:  Of course.  We called ourselves gifted ones then.  Gifted ones are men and women who were born with extremely advanced DNA that lends us special gifts ordinary humans lack.  Unfortunately, I knew nothing of DNA when I was mortal, because I was born in the 12th century.

Sheldon:  So you didn’t know why you were different?

Sheldon:  That must have sucked.

Marcus.  *laughs*  Yes it did.  I was later transformed into an immortal, as you know, by a psychotic vampire in the early part of the 13th century.

Sheldon:  It’s such a trip that you lived in the Middle Ages.  What gift were you born with?

Sheldon:  I’m too busy trying to decide whether that’s cool or creepy.

Marcus:  Well, how would you feel if you were racing along at insane speeds on your motorcycle at three o’clock in the morning, caught a glimpse of movement from the corner of your eye, and looked over to find the ghost of a man walking along beside you, keeping pace.  Notice I said walking, not running.

Sheldon:  Were both of your parents gifted ones?

Marcus:  No, just my mother.

Sheldon:  What was it like, being a gifted one in the 12th century?

Marcus:  It was very dangerous.  Many gifted ones were slain by those who feared or hated anyone who was different or who possessed abilities they didn’t understand.  I’m afraid our gifts were more often linked with evil than they were with miracles.

Sheldon:  That blows.  Did you hide your gift?

Marcus:  Yes.  Even Robert, the man I came to love like a brother, knew nothing of it.

Sheldon:  Did your mother hide hers, too?

Sheldon:  Who was the first gifted one you met, other than your mother?

Marcus:  A woman named Alyssa.  I met her when I was a teenager, shortly after I declared myself Sir Robert of Westcott’s new squire.

Sheldon:  Can you tell us about her?

Marcus:  *smiles*  Alyssa was quite remarkable.  While the rest of us hid our unusual gifts in an attempt to avoid being burned at the stake or stoned to death or—in my case—deemed utterly mad, she used hers openly on a daily basis.

Sheldon:  How’d she manage that?

Sheldon:  Who was Lord Dillon?

Marcus:  Lord Dillon was Robert’s older brother, the very powerful Earl of Westcott.  He was both known and feared throughout the land for his ferocity on the battlefield.

Sheldon:  Did you fear him?

Marcus:  I was . . . intimidated, I admit, when I first met him.  He was a man of few words.  And those words were often gruff.

Marcus:  *laughs*  Dillon wasn’t antisocial like Roland.  He was just scary as hell on the battlefield and gruff whenever he was off of it.  But . . . *shakes his head*  Once I saw how he was with Alyssa, how he accepted her gifts—her differences—and protected her from anyone who wished her ill because of them . . .

Sheldon:  You liked him?

Marcus:  *nods*  I admired him as much as I did Robert.  Times were different then.  Women were largely considered subservient to men.  Yet Dillon respected Alyssa, had no difficulty admitting she was a brilliant strategist, and often sought her counsel.

Marcus:  And Earls did not wed illegitimate peasants back then.  At all.  Period.  They didn’t even take peasants as lemans for more than the briefest length of time.  It simply wasn’t done.  So the odds of those two getting together . . . of them staying together . . .

Sheldon:  He must have loved her a lot.

Marcus:  Enough to defy his king.  And she loved him enough to risk her very life for him.  Theirs was a tale that was told by bards for generations.

Sheldon:  *arches a brow*  Much like yours is a tale that has been told by immortals for generations?

Marcus:  *sighs*  I’m not thrilled by their fascination with it.

Sheldon:  And most don’t even know the best part.

Sheldon:  Did Alyssa know you were a gifted one?

Marcus:  Not at first.  But she learned it eventually when she healed me with her hands after I was injured.  It’s impossible to hide something like that from someone who can learn so much about you with just a touch.

Sheldon:  What did she say?

Sheldon:  Then how do you know she—?

Marcus:  Because she watched over me as she would a younger brother from that day forth.  Went out of her way to be kind to me when I was at Westcott.  Covered for me whenever this or that spirit startled me so others wouldn’t think me mad.

Marcus:  She was.  And she was as fiercely protective of Dillon as Ami is of me.

Sheldon:  Did she ride into battle with him?

Sheldon:  Strong women are so hot.

Sheldon:  *offers his hand*  Thanks for the interview, man. 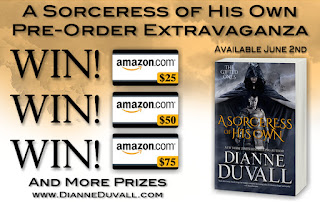 Pre-order (before June 2nd) and enter the Pre-Order Extravaganza!
Every 1000 pre-orders that come in between now and June 2nd, the author will give away an Amazon Gift Card, each larger than the previous one. To enter, Fill Out This Form!

A SORCERESS OF HIS OWN
The Gifted Ones Book 1
Dianne Duvall
Expected publication: June 2nd 2015 by Dianne Duvall

From the New York Times bestselling author of the acclaimed Immortal Guardians series comes an enchanting new series full of romance, danger, and loyalty: The Gifted Ones

Since the day Lord Dillon earned his spurs, rumors of his savagery on the battlefield have preceded him into every room, stilling tongues and sparking fear. Weary of battle, he wishes only to find a woman he can wed who will approach him not with fear, but with the tenderness that has been absent from his life for so long. Yet only the wisewoman seems invariably at ease in his presence. Perhaps because she garners the same fear in others that he does himself.

For seven years, Alyssa has been by Lord Dillon's side, counseling him from the shadows, healing him with her hands, and staving off the worst of his loneliness while his fearsome reputation keeps others at bay. Blessed—or cursed—with gifts that label her a sorceress, she is forced to conceal her youth and the love she harbors for him beneath umbral robes that lead Dillon and his people to believe she is the same aged wisewoman who served his father.

All is revealed, however, and passions flare when an enemy threatens Dillon's life and Alyssa sacrifices everything to save him. When Dillon discovers that the wisewoman is far from elderly, he is instantly entranced. And, as he and Alyssa work together to defeat an enemy bent on destroying them both, Dillon will risk anything—even the wrath of his king—to be with her.

Dianne Duvall is the New York Times and USA Today Bestselling Author of the Immortal Guardians paranormal romance series and The Gifted Ones series. Her books have twice been nominated for the RT Reviewers' Choice Award for Best Vampire Romance and are routinely deemed Top Picks by RT Book Reviews, The Romance Reviews, and/or Night Owl Reviews. Reviewers have called Dianne's books "utterly addictive" (RT Book Reviews), "fast-paced and humorous" (Publishers Weekly), "extraordinary" (Long and Short Reviews), and "wonderfully imaginative" (The Romance Reviews). Dianne loves all things creative. When she isn't writing, Dianne is active in the independent film industry and has even appeared on-screen, crawling out of a moonlit grave and wielding a machete like some of the vampires she has created in her books. For the latest news on upcoming releases, contests, and more, please visit www.DianneDuvall.com.