HAPPY BOOK BIRTHDAY TO LARISSA IONE AND HADES! HADES is a novella in Larissa’s Demonica Series! This is a 1001 Dark Nights novella so it is exclusively available as Amazon Kindle and Paperback. 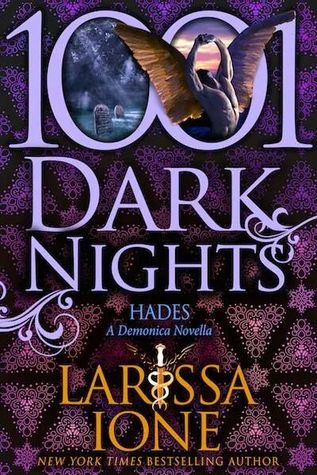 
A fallen angel with a mean streak and a mohawk, Hades has spent thousands of years serving as Jailor of the Underworld. The souls he guards are as evil as they come, but few dare to cross him. All of that changes when a sexy fallen angel infiltrates his prison and unintentionally starts a riot. It’s easy enough to quell an uprising, but for the first time, Hades is torn between delivering justice — bestowing or mercy — on the beautiful female who could be his salvation…or his undoing.

Thanks to her unwitting participation in another angel’s plot to start Armageddon, Cataclysm was kicked out of Heaven and is now a fallen angel in service of Hades’s boss, Azagoth. All she wants is to redeem herself and get back where she belongs. But when she gets trapped in Hades’s prison domain with only the cocky but irresistible Hades to help her, Cat finds that where she belongs might be in the place she least expected…

EXCERPT:
Her luxurious mink-brown wings were gone, sliced off in a brutal ceremony, and with them, her source of power. She totally understood why an Unfallen would cross the barrier between the human and demon realms to turn themselves into True Fallen and gain new wings and new powers. But was the evil upgrade worth it? Cat didn’t think so.
“Cat!” Azagoth’s voice startled her out of her thoughts, and she nearly dropped the tray of dirty dishes as she looked up to see him striding down the hallway from his office.
In the flickering light cast by the iron wall sconces, he didn’t look happy. He also wasn’t alone.
Hades, Azagoth’s second-in-command and the designated Jailor of the Dead, was walking next to him. No, not walking. With the way his thigh muscles flexed in those form-fitting black pants with every silent step, it was more like prowling. His body sang with barely-leashed power, and she shivered in primal, feminine response.
Son of a bitch, Hades was hot. Hard-cut cheekbones and a firm, square jaw gave him a rugged appearance that bordered on sinister, especially when paired with a blue Mohawk she’d kill to run her palm over.  But then, she’d kill to run her palms over all of him, and she’d start with his muscular chest, which was usually, temptingly, bare. Not that she’d complain about what he was wearing now, a sleeveless, color-shifting top that clung to his rock-hard abs.
She tried not to stare, but really, even if she’d stood in the middle of the hall with her tongue hanging out, it wouldn’t have mattered. He never looked her way. He never noticed her. She was nothing to him. Not even worth a glance. Those cold, ice-blue eyes looked right through her. And yet, this was a guy who laughed with Lilliana, pulled pranks on the other Unfallen who lived here, and played with hellhounds as if they were giant puppies. Giant, man-eating puppies.
Azagoth stopped in front of her. “Cat? You okay?”
She blinked, realized she’d been lost in a world of Hades. “Ah, yes. Sorry, sir. What is it?”

Don't miss the rest of this must-read paranormal romance series! Be sure to check out our reviews HERE!

Larissa Ione is a New York Times and USA Today bestselling author. An Air Force veteran, she traded in a career as a meteorologist to pursue her passion of writing. She now spends her days in pajamas with her computer, strong coffee, and supernatural worlds. She believes in celebrating everything, and would never be caught without a bottle of Champagne chilling in the fridge…just in case. She currently lives in Wisconsin with her U.S. Coast Guard husband, her teenage son, a rescue cat named Vegas, and her very own hellhound, a King Shepherd named Hexe. http://larissaione.com/blog/ 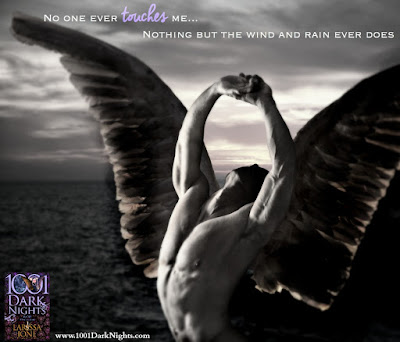