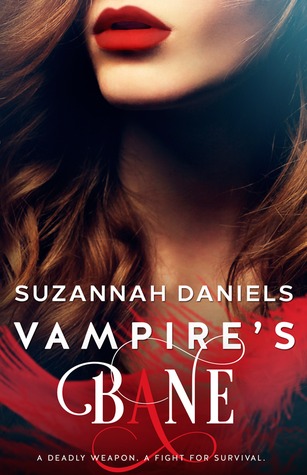 A seventeen-year-old girl finding her way in a world that is nothing like she remembered.

When Maylin Kavanagh’s parents surrendered her to The Program, they swore it was for her protection. After being confined in a small underground cell for nearly two years, she is finally released.

But the world has changed.

Most of the populace has been wiped out by a deadly disease, and the rules of society have regressed. But that’s not the worst of it. When her group is kidnapped by a band of rogue vampires, Maylin realizes the decline of the human population has brought other races to the forefront—races she never knew existed. And now they’re all battling for survival and power.

In his father’s absence, Thane Warwick must lead his people. He has two priorities: find his father and find humans who can supply blood to his tribe. Immediately intrigued by his latest captive, he becomes interested in Maylin for more than just her blood, but he soon discovers that he must make a choice between his father and her.

Despite their attraction, Maylin and Thane each have an agenda, and only one can be the victor.


VAMPIRE'S BANE is the first book in the VAMPIRE'S BANE series. While it does end at a natural turning point in the heroine's journey, it is an ongoing story, and not all questions will be answered. You will need to read this series in order.

Linda's Thoughts:
"I'm Dr. Canton. As you know, most of the population has been wiped out by an unknown virus. Now that an acceptable waiting period has passed since the last known case, it's time for you to fulfill your purpose...."
"You will take the van behind me to the next rendezvous point in St. Louis, Missouri. ...
"Each of you has been trained for a specific function during your time here. Your survival will depend on it.

VAMPIRE'S BANE by Suzannah Daniels is a YA post-apocalyptic paranormal featuring vampires, shapeshifters, humans, and more. It's set in a truly unique world where most humans seem to have died and paranormals now rule. It's the first book in Suzannah's new Vampire's Bane series and the first I've ever read by Suzannah. I'm a sucker for a good vampire romance; It remains a favorite genre of mine - and that's what drew me in. The story started a little slow for me - but really picked up pace at the end of the second chapter when the vampires made an appearance (after about 1/5 of the book). From that point forward, I didn't want to put it down. I liked Maylin Kavanagh, our fearless, kick-ass heroine, and connected almost immediately to Thane Warwick, her smokin' hot vampire boyfriend. Maylin is the youthful team leader with her mission being to get to St. Louis to save what's left of the human race. She has stated that her death is the only thing that will keep her from getting there. Unfortunately, there are others who want her - and they're not human. Her heart pulls her to Thane, but her head - and her team who depend on her - focus her sole goal on St. Louis.

Thane is an anomaly. He really cares for Maylin and seems to see the big picture in that he knows that if the human race goes down, so do his people. He doesn't have Maylin's innocence as he's not be locked away from reality for years as she has been. He seems quite savvy with the counter strategies of this time where power-plays seem to be the norm. I thought his Irish ancestry added a nice touch and I'm intrigued as to how that may play out as the tale progresses.

Creed, Maylin's cohort and co-team leader, was a total surprise. He gave Maylin strength, support and purpose through their captivity while the world outside was falling apart, but the reader will find that his allegiance to Maylin's stated purpose is questionable. You'll have to read the story to discover his true stunning objective. I'm filled with questions as to how the prophecy and Creed's people will figure in future books.

The story was well paced with some nicely played action scenes. The story is told in alternating Maylin's/Thane's POVs. Gettingetting into each of their heads helped me connect to both quickly. Maylin's and Thane's relationship happens very fast. One day she and her team are captured; they lose a teammate in the sudden brutal assault; Seemingly the next day, she's making out with the leader of the vamps that attacked them. In her defense, Maylin had been held in captivity for two years before she and her team started this trek to St. Louis and, upon release, she finds that everything and everyone from her life before are gone. She has a lot of life to catch up on and Thane is seriously sexy.

There's an interesting cast of supporting characters that increase the eclectic mix - from Maylin's team members' innocence, youthfulness and dependency and Thane's clan's hunger for blood - it all added to the uncertainty of the outcome of Maylin's mission.

One of my favorite scenes involved Maylin and Thane on the occasion of their first dinner. Maylin has a way with words and she had not dressed up for ages. This scene made me laugh as Maylin showed, again, how gutsy she was, against an opponent who was quite obviously stronger than her and the dichotomy between the world outside and world Thane lived in was brought to the forefront:

His dark blond hair was short and neatly trimmed around his ears. The blond highlighted it just enough to make one think it'd been kissed by the sun, but I knew better.
Stopping a few feet away, he watched me.
I squirmed under his perusal. "So, are we going to the prom or what?"
He laughed, revealing brilliant white teeth, though I saw no sign of his fangs....

Following please find a few more of my favorite quotes:

Unless I was delirious from my injury, we had just been captured by vampires.
Who were they, and what did they intend to do with the rest of us?
---

"Your scare tactics are useless on me, Thane. My people have needs of their own, and they don't include being locked up in an underground cavern by a bunch of overgrown mosquitoes."
---

Thane - She grasped my face in her hands and pulled me to her, pressing soft kisses on my lips. My arm slid around her waist, and my hand pressed against the small of her back until her body melded with mine. My tongue demanded entrance, and she opened to me, allowing me to taste her, tease her, devour her.
And in that moment, I claimed her as mine.

The writing was good - but obviously aimed at a young audience; I enjoy YAs... so that wasn't an issue. Expect some colossal surprises along the way; This is not a book that you'll be able to guess what's going to happen next. The ending was a total shocker for me. DURN! I liked that character a lot - and sure hope that what seemed to happen, didn't!

This series shows a lot of promise and has some really good characters. I'm definitely thinking this series will get stronger with each book . I recommend this series to readers who want a dash of what-happens-after-the-world-as-we-know-it-ends along with a possible romance in their reading. It's not all doom and gloom. Young fans of series like the Walking Dead and Supernatural will eat it up! SHAMAN'S CURSE, the next installment, is tentatively scheduled to be released this coming September! I can't wait!