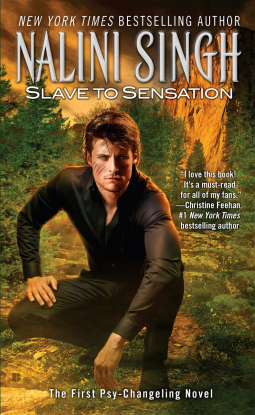 Nalini Singh dives into a world torn apart by a powerful race with phenomenal powers of the mind-and none of the heart.

In a world that denies emotions, where the ruling Psy punish any sign of desire, Sascha Duncan must conceal the feelings that brand her as flawed. To reveal them would be to sentence herself to the horror of "rehabilitation" - the complete psychic erasure of everything she ever was...

Both human and animal, Lucas Hunter is a changeling hungry for the very sensations the Psy disdain. After centuries of uneasy coexistence, these two races are now on the verge of war over the brutal murders of several changeling women. Lucas is determined to find the Psy killer who butchered his packmate, and Sascha is his ticket into their closely guarded society. But he soon discovers that this ice-cold Psy is very capable of passion - and that the animal in him is fascinated by her. Caught between their conflicting worlds, Lucas and Sascha must remain bound to their identities - or sacrifice everything for a taste of darkest temptation...


Thoughts:
The first book I read from Nalini Singh and this series was Psy-Changeling 0.5, Beat of Temptation. I quickly became engrossed in the story of the DarkRiver leopard pack, and started Slave of Sensation that same evening. Why didn't I pick up this series sooner?!

Lucas Hunter is Changeling and alpha of the DarkRiver leopard pack, and he is on the hunt for a killer before war breaks out between the races.  Entering a business partnership with the cold and emotionless Psy, Lucas is hoping to weasel his way in closer to the Council, the leaders of the Psy and would-be rulers of the world, and find out why they are hiding a killer. But Sascha Duncan, his liaison on the project, is not the icy Psy Lucas expected, nor does she carry the metallic stink of the emotionless. Instead, she carries a scent that his animal can't get enough of. Sasha may be a Cardinal Psy, one of the most powerful of her race, but her night sky eyes are the only evidence. Deep down she knows that she is different then her fellow Psy, flawed. So Sasha has become a master at building shields strong enough to keep even the most determined Psy out of her mind, because if anyone were to find out that she wasn't the perfect Psy on the inside, they wouldn't hesitate to take her in for reconditioning - a fate worse then death. But when she meets the Changeling, Lucas, her shields and her deeply hidden emotions quickly begin to crumble. Can Lucas and Sasha fight their growing attraction in order to find the killer before he strikes again?

Nalini Singh masterfully lays the foundation for the Psy-Changeling series in Slave to Sensation. There are three races in this fantastic world. Changeling; human and animal who can shift between the two and cannot survive without emotion or touch. Psy; frigid beings that are strictly logical and who condition out all emotions at a young age, with psychic abilities that are tethered to those of their race through the PsyNet. And human, who are easily overlooked in their ordinariness.

The Psy race is complex and function on a cerebral level, but for those that are supposedly emotionless they are beyond power hungry. At times, the complexity of the PsyNet went above my head but that didn't deter my fascination with the world and story. My favorite are the Changelings, fierce and passionate, they love hard and fight for those they call theirs even harder. If you love shifter romances then Slave to Sensation is a must-read for you! And Lucas, a Changeling, was a wonderful leading man. He is strong, protective, playful, sexy, and once he see's Sasha as his own he fights to show her that there is nothing flawed about her and that she is deserving of the love she has always craved. There is nothing to dislike about his character and everything to love. But his growing relationship with Sasha was nothing short of an uphill battle. There were so many roadblocks in their way my heart was squeezed with doubt at times for their happily-ever-after.

Sasha is confused and understandably terrified at the emotions that Lucas brings out in her. She knows that there can never be a future for them, if she could manage to escape there was still no leaving the PsyNet without her death. And though her logical mind knows this, her body and her newly liberated emotions still crave Lucas. Which causes Sasha to unknowingly pull Lucas into the most erotic of dreams where she gets to play out every fantasy that she is too afraid to realize in her waking moments. These moments were beyond sensual, and though the romance was slow to build, the chemistry between Lucas and Sasha was undeniable. And though there wasn't a lot of sex either, my smutty romantic heart was still happy. I especially enjoyed the banter between these two! The story moved at a quick pace with suspense and romance making an incredible page-turner.  The pack dynamics was intriguing and a number of secondary characters were introduced that I am excited to learn more about.

Bottom line, Slave to Sensation was a wonderfully written story, with captivating characters, and unique world-building that didn't disappoint. I am kicking myself for not starting this series sooner. I can tell this is going to be a back-to-back binge read until I get to the most recently released books. Who needs sleep anyways, that's what coffee is for! lol