#Excerpt & #Giveaway of Sugar on Top by Marina Adair 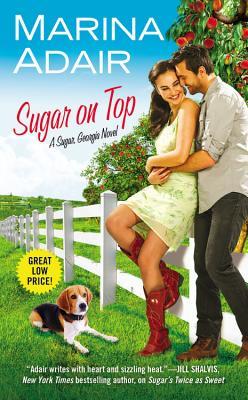 The last thing Glory Mann wants is to become chairman of the Miss Peach Pageant in Sugar, Georgia. Spending months hearing nothing but the clinking of pearls and judgment? No thank you! But when Glory is forced to take the rap for a scandal she didn't commit, the judge sentences her to head the committee. Even worse, her co-chairman is rugged, ripped . . . and barely knows she's alive.

Single dad Cal McGraw can't take any more drama in his life. After a difficult divorce, his little girl became a boy-crazy teenager and his hands are full. The last thing he needs is to spend his down time with the town bad girl. Glory is pure trouble-tempting and tantalizing trouble. But he can't deny the strong chemistry between them-or how her touch turns him inside out. Now as squabbles threaten to blow up the contest and the town of Sugar itself, Cal must risk everything on the sexy wild card to get a second chance at love . . .

Marina Adair is a lifelong fan of romance novels. Along with the Sugar series, she is also the author of the St. Helena Vineyard series and the upcoming Shelter Cove series. She currently lives in a hundred-year-old log cabin, nestled in the majestic redwoods of the Santa Cruz Mountains, with her husband and daughter. As a writer, Marina is devoted to giving her readers contemporary romance where the towns are small, the personalities large, and the romance explosive. She also loves to interact with readers and you can catch her on Twitter at @MarinaEAdair or visit her at www.MarinaAdair.com.