Loving Cassie was effortless.
She was a thirst I couldn’t quench.

She was everything I needed, but nothing I deserved.
I failed her more times than I could count.

I lied relentlessly.
And she always forgave me.

Maybe I deserved to be left behind.

Jax swept me off my feet with his disheveled hair and his easy smile.
I loved him fiercely.
He made me believe in the fairytale.

Then the walls crumbled around me.
The lies never ended.
I left him behind. I had no choice.
I mourned the loss of him.

But I moved on.
I created a new life,
Now, I was marrying someone else.

Where do we go now that he’s back?

“Jax,” I breathed. I reached behind me, grasping for the door handle to my backseat. When it opened, I pulled his face away from my chest. His lips were red from thoroughly kissing me. His chest was heaving and his eyes were glazed. I smiled and tugged on his hand. I climbed inside my car, lying back on the seat. He crawled on top of me and shut the door behind him. Without pause, he helped me out of my light jacket and tossed it in the front. He pulled my shirt over my head and went back to attacking my breasts. I wrapped my arms around him and ran them over his back. He had never been skin and bones, but now he had more definition. He wasn’t too bulky, there was just enough there that my arousal kicked up another five notches.

I pulled on his shirt, whipping it over his head. He smirked at me, taking my bra off.

“Cassie,” he said, his voice reverent and so full of want that it almost hurt to hear it. “Fuck. I never thought I’d be able to touch you, kiss you again. Now that I started, I’m not sure I can ever stop.”

He leaned down and pulled a nipple into his mouth. I cried out. His hand slid down my abdomen, my muscles twitching as he moved over them. He popped the button of my jeans and slid down the zipper before slipping his hand inside. He traced his finger over my panties. He groaned.

“Fuck, Cassie.” His whole body went still and stiff, his head buried in my neck. “I think I’m going to die. Right here, right now. If I wake up tomorrow and this was a dream, I don’t think I can go on with life.”
“It’s not a dream, Jax. I’m here, with you.”

He regarded me and the pain in his eyes caused my heart to squeeze painfully. It seemed as though he was about to say something, but instead, he devoured my lips and slipped a finger inside me. I arched my back, ripping my lips away from his. The sensation, the feeling, it was so much. Too much.

“God, you feel so good.” He buried his face in my neck again and kissed, licked, nibbled it. My mouth was wide open, as were my eyes, as he moved his fingers inside me magically. I couldn’t think about anything but the feel of his fingers and the way he was playing my body like a guitar. He still knew exactly how to touch me in such a way that, before long, my hips were bucking against his and I screamed out his name.
He slipped his hand out of my jeans, moving up to brush my hair out of my face. He studied my face as though he’d never see it again. My mind was still coming back down to Earth as he helped me put my bra and shirt back on. Before I knew it, he was sitting next to me, pulling his shirt on. He kissed my lips, long and passionate and so amazingly. I wanted his hands on me again, even though they’d been gone only been a few minutes.

“I don’t want to leave you, Cassie, but if I don’t leave now, we’re never leaving this parking lot,” he said, then pressed a kiss to my forehead.

I wrapped my arms around his neck, kissing him. I never wanted this feeling to end.

From the time she was old enough to form words into sentences, Kristy Love has been writing stories. She attended La Roche College and graduated with a Bachelor's Degree in Professional Writing. When she's not writing, Kristy can be found with her nose stuck in a book or spending time with her family and friends.
She lives with her husband and two girls in Pittsburgh, Pennsylvania. 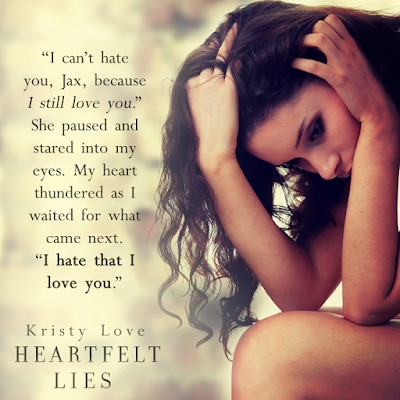