#Review: Behind the Mask by Carolyn Crane - 4.5 Wine Glasses 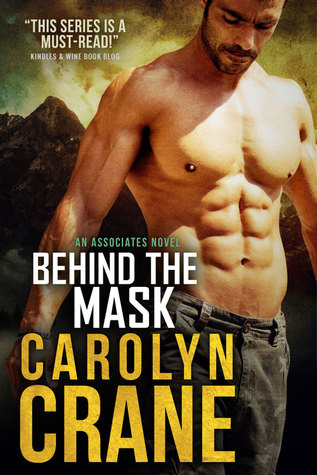 TO SAVE HER TWIN SISTER SHE MUST SWITCH PLACES WITH HER...

When her long lost sister--a prostitute--is won in a card game by a brutal drug cartel, Zelda knows what she has to do: take her place. Save her. Focus on infiltrating the shadowy group on behalf of the Associates, and try not to think about why she left the spying game years ago. She’s slept with dangerous criminals before; she can do it again.

Hugo Martinez is one of South America’s most lethal and wanted men, a legendary mercenary living on a windswept mountain. Even at the height of the war he wasn’t in the habit of taking women captive, but the American whore has seen his face. And he and the orphan boy need a cook. He shouldn’t want this woman, but there’s something so unusual about her…

Little by little, Zelda finds herself falling for her captor…but is he the killer she’s been hunting all these years?

Kimberly’s Thoughts:
Pack your bags because you're about to kiss Kansas goodbye…..

If you have been following along with this series you know all about Zelda and Dax (this particular book would actually work as a standalone if you started here, you just wouldn't start off with a strong foundation for how Zelda and Dax run the show).  They are the leaders of the shady covert good guys (can get a bit subjective at times) group called The Associates.  Zelda is more of a silent leader but also the heart as she advises Dax when Associates need a break or who would work best with whom.  Dax is the Machiavellian leader who sees twenty steps ahead of anyone else and will sacrifice anyone, ANYONE for what he considers the greater good.  However, when Zelda's twin sister Liza finds herself traded in a card game to a South American drug lord and Zelda states she is going to go in Liza's place, Dax has a moment of weakness and doesn’t want to let her go.  Zelda reminds him that her background as a former forensic botanist for the CIA who was placed in the field several times, makes her qualified to complete the dual mission of saving her sister and retrieving some files from the drug lord and also reminding him their motto is for the greater good.  Dax relents but can't help wondering if Zelda has some kind of death wish because of the incident that caused her to retire from the CIA.  Oh yeah, did I mention that Zelda was captured and tortured until she gave up the name of an undercover agent who was then killed? Thus, we have our strongly vulnerable damaged heroine.

Now, the part of the story where Zelda's mission was to retrieve files from the drug lord so The Associates could trade information to put to end a standoff on an oil tanker was the weakest part of the story.  It was vague and never really flushed out and with everything else going on it felt like a very forced reason to get Zelda with that drug lord.  Especially, when Zelda arrives at said drug lord's place and is packed off to be given to another drug lord.  This time she is to be given to El Gorrion, who is the worst of the worst but she is also about to meet up with our hero.

Hugo grew up traveling the world but in the unglamorous situation of being not his mother's husband's child but the child of her employer.  With everyone being aware of this he took mental and physical mistreatment from his "father", ignored by his father, and watched his mother fight more and more with her husband while being powerless to refuse her boss.  When he was in his teens he decided to take off on his own and began a life of training with highly skilled elite fighting groups and tribes around the world.  He became a mercenary for wars around the world and the legend of Kabakas was born.  Kabakas ultimately found himself on the side of right doing unseeingly things, his trademark kill of a dagger through the right eye, chopping up the last victim as they were still alive, and leaving only one survivor to tell the tale.  Villages under his protection were left alone but after a berserker killing incident where women and children were killed, his name became tarnished and he was later reported to have died in a fire.  So when a man living with his son in Buena Vista, a village attacked by El Gorrion, claims the drug lord won't be back after rumors start that Kabakas who died twelve years ago killed a bunch of El Gorrion's men, no one pays him much attention.  Thus, we have our strongly vulnerable damaged hero.

You might be asking, why did you tell me to pack my bags? This all sounds like romantic suspense, highly detailed suspense but romantic none the less.  Zelda and Hugo's relationship is what makes this book so much more and more in a way that won't always make you feel comfortable.  Their meet cute involves Zelda in skimpy lingerie tied to a jeep while Hugo slaughters a battlefield of men, their first sexual encounter features opium, and the term hate sex has never been truer (or hotter).  Hugo thinks Zelda is truly Liza, a former druggie and current high priced prostitute.  Zelda spent a lot of her time hunting Kabakas while in the CIA and has to find out if Hugo is an imposter or the real deal.  Their relationship is incredibly raw in action and emotion; this is not for the faint of heart. Zelda is tough, competent, and hurting, Hugo is very emotionally damaged from his childhood, a warrior, and has a heart just waiting to be freed from its encasement; this is Anne Stuart for the 21st century. Their journey from mistrust, wariness, shyly reaching out, connection, back to mistrust, to full blazing loving will reach out and grab you by the throat.

I honestly couldn't tell you if this is romantic suspense or suspense with romance, sometimes the other dominates and I could see fans of either genre liking this.  The beginning is more suspense as Zelda's travels lead her to Hugo and we have the plot points of Hugo kidnapping Zelda to be a pseudo governess to the boy he adopted, El Gorrion poisoning the flower crops Hugo's town survives off, and Dax and the Associates developing their own agenda regarding Kabakas. Sometimes all the puzzle pieces don't quite jive or seem stretched out but I think the emotional aspects carried them through.  The middle and right before the end where everyone meets up, has all these suspense plots swirling but the core of the story becomes Hugo and Zelda.  Their rawness that I mentioned is so powerful and definitely what you are going to remember and take away from this.

If you're still with me after this long review, I just want to say, you don't read this to be comforted, entertained, or to escape reality.  Behind the Mask will do all that for you but you're going to read this because you want more.  More in a pearl clutching ragged emotional way.  There is so much to this story that I didn't even touch on everything; there's moves and countermoves, betrayal, action, suspense, emotional upheaval, growth, hurting, healing, and hard loving. With plenty of Associates who look to be in the wings, if you're willing to jump into the deep end of the pool read this book and get involved with this series.