Sexy Snippets: In Want of a Wife by Jo Goodman

Tuesdays have never been so sexy!
Sexy Snippets is a weekly feature hosted by Reading Between the Wines for the 18+ crowd. Want to join in? Just grab the button, post a sexy paragraph or two from your current read and share the author & title so other participants can add the book to their TBR list if they like, and then leave a comment with a link to your post. And don't forget to have a sexy good time! 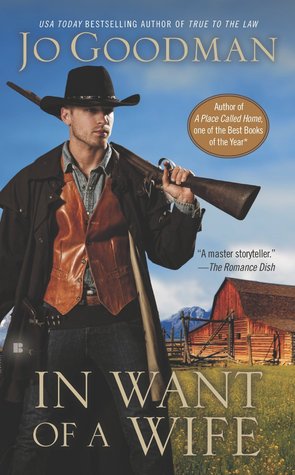 He wanted her. He wanted her under him. He wanted her hands on his back, her fingertips white against his flesh, the tips of her nails impressing his skin with pale crescents. He wanted to lie between her thighs, her knees raised on either side of him, and move inside her. He wanted to move her.
So he kissed her again, soflty, carefully, and began a second trail of kisses that took him to her breasts. Her fingers wound through is hair and twisted the strands at his nape. They splayed and stiffened over his scalp when he took her nipple into his mouth and sucked. He laved the areola. Her nipple was a little pink bud that he could worry between him lips and flick with the tip of his tongue. He could tease it and hear her breath catch. She made it tempting to linger, but there was her other breast that was equally worth of notice, and a lovely little valley to explore before he got to it.