We'd like to share with you a paranormal romance from author D.F. Krieger - PANTHERS AND PRECINCTS. Enjoy! 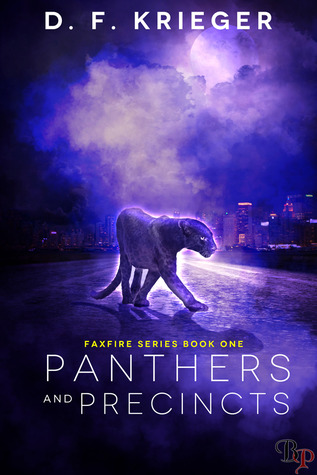 
Meet Zeara—zoologist, crime solver, and crazy cat lady. Throw a literate panther and a sexy detective into the mix and watch the trouble ensue.

People didn't just happen to "drop by for a visit" at midnight. Whoever was on the other side of that door either had a good reason, one that she probably didn't want to hear, or would wish they had once she finished tearing them apart.

Dr. Zeara Faxfire and her side-kick cat, Magic, are on the case when a panther is discovered during a police investigation of a missing boy. The fact the panther can write is only slightly scarier than Zeara's attraction to Detective Markovich. Add a little magic, some mayhem, and scientific proof of the paranormal, and she ends up knee-deep in trouble. Can she find the missing boy, solve the riddle of the panther, and face her own past before time runs out? Or will the only way to give everyone a happy ending come at the expense of the job she loves?

"Mom?" Magic brushed his head against her shin before he stared up at her. It was obvious he was picking up on her body language, and she was throwing off some serious vibes of discomfort.
"Nothing, baby, I'm fine." She smiled down at him as she inserted her keys into the door lock. A static pop shot up her arm and the world around her turned bright. Emotions, sensations, and pictures flooded her mind in a great tsunami that caused her to struggle for breath.
Open yer heart and yer mind. Let the seal release its bind.The whispered words in an exotic accent sent shivers up her spine as they echoed in her head.
Purple, red, and blue vied for dominance at coloring her perception. Visions of creatures—things—that she had no word for flashed at her. Teeth, feral yellow eyes glowing, danger! The flash of metal, moonlight gleaming, butterfly wings fluttering lazily.
Regardless of how hard Zeara tried, she couldn't sort through them and catalogue them fast enough. The one thing that stuck out the most was the complete knowledge that none of these thoughts she was experiencing were hers. Stop! I can't take anymore. Too much.
When the world around her had calmed and cleared, she found herself on her knees on the porch. Magic was shoving his face into hers, his cries high-pitched and frantic. Her stomach churned and bile rose in her throat, tasting bitter and gritty.
"What...the...fuck...was that?" Zeara panted as she uncurled her arms from around herself. When had she dropped down into this position? When had she wrapped her arms around herself like she was staving off a horrible chill?
She raised her gaze to stare at her keys still dangling from the lock of her door. Did she dare touch them? What if whatever had happened, happened again?
This is utter bullshit. I'm just exhausted and my mind is playing tricks on me. It's all because of Jake's mumbo jumbocrap that I'm hallucinating like this.
With a stubborn set to her jaw, Zeara stood once more and, after only a slight hesitation, she grasped her keys. Once more the sensations enveloped her, though they were less invasive this time. Voices cried out around her, begging for her attention, though they sounded distant and muffled. Images plowed through her, arousing emotions that her brain insisted weren't hers. After a few moments she was able to force them into some semblance of a cohesive sequence.
A woman, her features sculpted and exotic-looking, stood before Zeara. Her hand was imposed over Zeara's own, clasping the door handle. Her eyes were closed and her mouth moved in a steady motion that reminded Zeara of chanting. When she opened her eyes to stare directly at Zeara, they flashed the same bright purple that was streaked in her dark hair.
"The Hidden World has chosen you. Wake up, hearth woman." The words echoed loudly and invaded Zeara's ears long after the woman's lips had stopped moving. It reminded her of watching a badly dubbed movie. Except a movie didn't freak her out this badly.
A ripping noise filled the atmosphere and the air was sucked from Zeara's lungs. She gasped and tried desperately to gain a breath, but it was like a vacuum was pulling her lungs inside out.
"Stop it!" Her scream jarred the world around her, and the sensations that were assaulting her ceased immediately. Panting, Zeara surveyed her surroundings as she tried to make heads or tails out of what had just happened.
Magic was crouched at her feet, his fur standing completely on end. His eyes were wide with fear as he stared up at her.
"I know exactly how you feel," Zeara whispered.

When D. F. Krieger was banned from writing contests at her school, she immediately set it in her head that she would become a professional writer. Since then, she has thrown away her plans of world domination through books, but she still enjoys writing. Her tastes run from classy urban witches to dragons, space pirates to shape shifters. By the time she pens her final book with a hand ravaged by age, she hopes to introduce her readers to many alternate worlds, lines of thinking, and captivating characters.
You can find D. F. on the East Coast, hiding away from the real world with a gleam in her eye and a plot in her head. She resides with her husband, kids, and pets; who all kindly put up with her random bouts of laughter (over things she can't explain) and journal collecting fetish.


Giveaway:
The publisher is giving away a digital copy of the book to one reader. To enter, just fill out the rafflecopter below. Good luck!