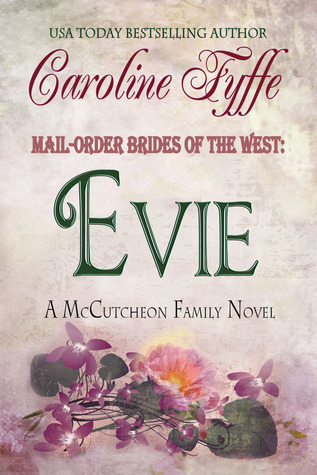 MAIL-ORDER BRIDES OF THE WEST is a new series created in collaboration by USA Today Bestselling Authors Caroline Fyffe and Debra Holland.

Well-bred socialite and bride-to-be Trudy Bauer arrives at the St. Louis based Mail-Order Brides of the West agency full of excitement for an adventure of a lifetime. She befriends the agency’s maid, Evie Davenport, and the two form a strong and lasting friendship. They vow to stay in contact through letters when Evie takes hold of her destiny and arranges a marriage on the sly. Each brave young woman is ready to face whatever an unknown groom and life in Montana can throw her way.

In Fyffe’s Novel, house servant Evie Davenport travels by stagecoach to Y Knot, Montana in a McCutcheon Family Novel. In Holland’s book, bride-to-be Trudy Bauer rides the train to Sweetwater Springs, in a Montana Sky Novel. Through their correspondence, the friends keep each other abreast of their hardships, trials and tribulations—some of heartbreak, some of love.


Thoughts:
Mail-Order Brides of the West:  Evie is a pure and sweet western romance primarily set in St. Louis and Y Knot, Montana.  It's the first book I've ever read both by this author, Caroline Fyffe, and about a mail order bride.

Our heroine, Evie Davenport, is a pseudo mail-order bride.  She's actually a maid at Mail-Order Brides of the West agency, one of many agencies that specialize in finding husbands for sponsored young ladies.  She has watched so many brides go to their happy-ever-afters and she longs for a husband and family of her own.  However, she knows she wouldn't be a good candidate because of her background.  She is illegitimate without a father.  Her mother died in service to the agency's owner who allowed Evie to stay if she assumed her mother's duties.  Evie works hard without complaining and suffers abuse by some of the hotty-totty brides who are essentially bullies.

One day while fetching the mail for her employer, a particular envelope catches Evie's eye and she secretly intercepts it.  She discovers that it's from Chance, a young cowboy in Montana who is seeking a bride.  Knowing that she shouldn't, Evie answers him and they start corresponding with Evie presenting herself as one of the brides well-schooled in how to cook and run household.  One thing leads to another and Chance sends her money to pay for her fare to him.  Evie leaves monies equivalent to the finders' fee  that the agency charges for her employer and catches the stage coach to Montana on her next day off.  She means to fess up to Chance right away so they have no secrets between them, but that doesn't happen.  Her something blue, something borrowed, is embroidered with three words that Evie embraces in her heart hoping that it proves true:  “Love never fails.”

Chance is so thrilled to have found Evie.  He wants a partner in life and to help him with his burgeoning ranch.  Unfortunately, he hasn't been exactly truthful with Evie either.  A prospective groom at the bridal agency has many hurdles to leap and one requirement is that his home must be finished and ready for the couple.  Chance had meant for it to be, but circumstances beyond his control had interfered.

This is the story of two young people with secrets but also with high aspirations of fostering a loving relationship.   They really do care for each other.

“Evie," he whispered next to her ear, "I want to make love to you, hold you in my arms, until the moon crosses the sky and the morning comes.”
“She'd known from the moment she said "I do" that she really truly did.”

It was a pleasure to witness the couple overcoming their insecurities, exposing their secrets and maturing into two young adults in a real, loving and trusting relationship.

One of my favorite scenes occurs during a cooking lesson that one of the town's residents gives to Evie.  Their discussion had me laughing out loud.  I picked up an astute cooking tip too:  “Cooking isn't hard. It just takes a little bit of imagination and determination.”

Y Knot, Montana is the perfect backdrop and secondary characters such as the other brides, the new saloon girl, and other unique town residents, the couple's dog, horses and cattle really made the story special.   I grew attached to all the characters and hope we get to read their stories too.

The narrator was excellent with the proper pauses and inflection.  Her voice changed for each character making it easy to follow who was speaking.   With genuine characters, a well-defined plot and crisp storytelling, I found this to be a very enjoyable read that I didn't want to end.  LOL!  I had a big smile on my face through-out the epilogue... such a lovely ending to this wonderful book.  I would recommend this book to anyone who enjoys classical historical romances.