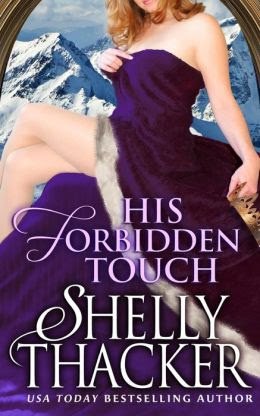 The dark swordsman swore to protect a princess—not to fall in love with her...

Hidden away during years of war, the beautiful princess, Ciara, knew little of the world outside—until a conqueror came, and the castle was lost. Now, in the cause of peace, she must wed the brute who destroyed her home and happiness. And the man charged with delivering her safely to the shameful ceremony is a heartless mercenary!

Recalled from exile, Royce Saint-Michel can now win back his confiscated title and lands if he transports the proud, defiant princess to her powerful fiancé. But the road is long and dangerous, prowled by assassins who wish the marriage thwarted and the lady dead. And the greatest threat to the impending union is Royce's own yearning heart, enflamed by Ciara's courage, her fire, her innocence, her beauty—and by the promise of a passion for which Royce would gladly forfeit all he stands to gain including, if necessary, his life.

Enchanted, Enthralled, and Entranced!   His Forbidden Touch pulled me in from the very beginning and never let me go.   I love historical romances and this one delivered with a love fated to fail, beautiful vistas, heart-wrenching danger and thrilling suspense.  If you loved The Princess Bride, you will love this story as it is of a similar ilk.  I felt that I could hear  Wesley's "As you wish..." as I listened to this fractured re-framing of that famous classic.

“I would be anyone if only I could be with you.”
Princess Ciara needed a trusted protector to escort and protect her from the rebels who wished to kill her to keep her from marrying her powerful, evil betrothed.  Marrying him would fulfill the peace treaty that her father and Prince Damon had agreed to.  Doing so rendered the promise of peace to the people of Shalom and Thuringia who had suffered the devastating effects of seven years of war.   Ciara, who had grown up sheltered and protected behind her father's castle walls,  quickly develops a feisty backbone as she learns about the world and the life she’s never been able to fully live as a princess .

“What have I done?" he asked, his voice raw. "You used to be such a sane, sensible lady."  Ciara replied  "You took me on a journey into my own heart.”
Exiled ex-knight Royce Saint-Michel was summoned back to his former home to safely escort Ciara to her betrothed and, if successful, would reclaim his name and land.  Royce was a classic tortured hero.  He began as a brooding , dark character but evolved into a wonderful, honorable, swoonworthy hero.  I dare anyone who loves romance novels to not fall in love with Royce.   His feelings of desire, hunger and fear for Ciara were heart wrenching and  raw and  left me oftentimes gasping for breath.   I would literally have to hit pause just to allow my heart rate to return to a normal pace.

Ciara and Royce are akin to Fire and Ice as they set upon their journey.  Neither can believe the attraction felt for the other.   As they travel, their burning attraction is not the only issue they face.   Danger lurks everywhere.  But, the choice between ending the war or saving Ciara from Prince Damon's hands hung over their heads through-out and ate them both alive.

This is the best medieval romance I've ever listened to.  The author expertly evoked a multitude of emotions seamlessly:  love, humor, longing, passion, grief, and fear.  It was a multi-layered read interlaced with history, steamy romance, and gripping intrigue.  The writing was first-rate.  The narrator, Julia Motyka,  was excellent.  She paused for emphasis in all the right places and exuded the appropriate emotions into every word.  Even though His Forbidden Touch is listed as second in a series, it can easily be enjoyed as a standalone.  Indeed, this was the first book I've ever enjoyed by her but I assure you, it will not be the last.
Bottomline:  This was an incredible historical  "doomed love" romance with a happy ever after ending you will not see coming.  Read it or listen to it, as you wish.   You should definitely rush to whatever bookstore you use and buy it now!!!!!!
Posted by Crystal @ RBtWBC at 5/17/2014 09:00:00 PM