Happy Release Day to Jennifer L. Armentrout! SCORCHED is a standalone New Adult Contemporary Romance that is a part of the Frigid Series.

Most days, Andrea doesn’t know whether she wants to kiss Tanner or punch him in the gut. He is seriously hot, with legit bedroom eyes and that firefighter body of his, but he’s a major player, and they can’t get along for more than a handful of minutes. Until now.

Tanner knows he and Andrea have had an epic love/hate relationship for as long as he can remember, but he wants more love than hate from her. He wants her. Now. Tomorrow. But the more he gets to know her, the more it becomes obvious that Andrea has a problem. She’s teetering on the edge and every time he tries to catch her, she slips through his fingers.

Andrea’s life is spiraling out of control, and it doesn’t matter that Tanner wants to save her, because when everything falls apart and she’s speeding toward rock bottom, only she can save herself.

Sometimes life makes you work for that happily ever after…

I watched Andrea walk into the living room, the normal twitch of her hips absent. No one swayed ass like Andrea, and seeing it gone from her step was answer enough. Our normal whatever-the-fuck-it-was between us had gone further than I intended. No doubt what I’d said had cut her, but shit, it was no different than any other day.
My hand tightened on the neck of the bottle. For the life of me, I had no idea what the hell Andrea Walters’s problem was. Honestly. No fucking clue. One minute, sweet and sugary words parted those pouty pink lips of hers. Next second, she was a fire-breathing dragon from hell—a hot, fire-breathing dragon, but still. Her moods flipped more quickly than cups did during a game of flip cup.

Maybe it was because she was a redhead?

She’d always been this way with me, and the most fucked-up think about it, there was a part of me that actually looked forward to whatever was going to come out of her mouth. Twisted as fuck. It was like a game between us, to see who could hit the hardest without lifting a finger. If nothing else, it was damn entertaining—or at least, it had been until now. Now, I wasn’t too sure about it.

Those pretty doe eyes of hers had looked suspiciously damp right before she’d looked away, and yeah…that didn’t sit right with me.

Kyler shot me a look as he walked past me and grabbed a beer out of the fridge, but I watched Andrea sit on the edge of the couch, her posture unnaturally rigid.
Sydney leaned against the arm. “We’re thinking about leaving early in the morning, around six.”

My gaze flicked to Andrea, expecting her to make some kind of crack about not getting up that early, but she was abnormally quiet. My spine stiffened.

“That should put us at the cabin between nine and ten in the morning, depending on traffic.” Kyler stood beside me as he screwed off the cap. “Then we’ll be heading back the following Monday.”

“Sounds good to me.” I didn’t take my eyes off Andrea as she fiddled with a strap on her sandals, slipping them onto her feet.

Sydney glanced at me, smiling softly. “You’re definitely off from the fire department?”

I nodded. Kyler had mentioned weeks ago about wanting to hit up the cabin before everyone headed back to class, and I’d requested the time off then. Which had meant I’d pulled a lot of doubles, but I hadn’t minded it. Wasn’t too different from the twelve-hour shifts we worked in the first place, and I’d only be there until February of next year, and then I was off to the academy. Not that I was in any hurry to leave the fire department, but being a cop was in my blood. Except I wanted to be a good cop. I’d probably still volunteer at the fire hall once I knew what kind of schedule I was looking at on the force.

“It makes sense if we drive up together.” Sydney toyed with a strand of her hair. “Kyler and I can pick you two up.”

Andrea had twisted toward Sydney and started to protest the whole idea of taking one car. I zoned out, staring at her as the bottle of beer dangled from the tips of my fingers.

Damn…she was a cute girl. Nah, she was more than cute, and it wasn’t like this was the first time I’d noticed that. From the first time I’d seen her at the bar with Sydney, she’d done more than just poke my interest. Hell, anyone with eyes knew she was a very pretty girl. Lush lips. Freckled cheeks and thick, dark eyelashes. Come to think of it, she reminded me of a girl I’d had a crush on in middle school. Hell, couldn’t remember that chick’s name, but she’d had freckles and red hair. I think I used to pull on her braids or some annoying shit like that. My lips tipped up in a small grin as I lifted the bottle to my mouth. Andrea was a motherfucking firecracker, though, not the kind of girl who was easily tamed.

Hell, not the kind of girl you even wanted to tame. 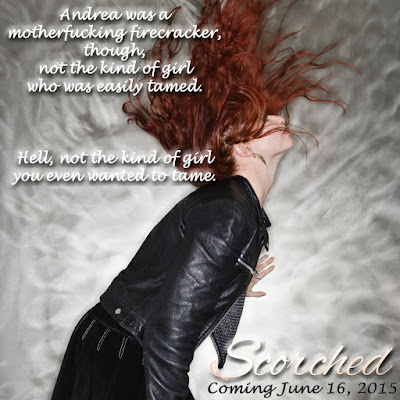