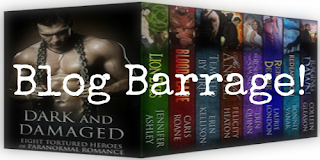 Dark and Damaged: Eight Tortured Heroes of Paranormal Romance Boxed Set is now available worldwide for a special introductory price of only $0.99!

Here’s more about this fantastic eight book boxed set, including an excerpt from one of the stories.

“Max, this is a rare opportunity to catch Rastingard outside the protection of his home, and our plan was already in place before that letter was intercepted,” said Savina. “Understand this: I don’t merely want to stake Rastingard—though I wager I’ll have a better likelihood of getting close enough to do so than anyone else in this room. I also want to obtain all the documents from his safe. Including the letter about Macey, if he has it.”

Max went noticeably rigid at the sound of his daughter’s name. Was it true he hadn’t seen or spoken of her since his wife had been killed? That he refused any information about Macey, including her whereabouts? Savina couldn’t imagine her father doing such a thing to her. To himself. He would have died—he did die—before cutting her out of his life.

“Aside from the obvious—I refer to your personal, er, attributes,” he said, flapping a hand vaguely in her direction, “what makes you believe he’ll bite? Pun most definitely intended.”

“That’s what I’ve been doing for the last six months—trying to create this opportunity. Alexander Purcell, who is the darling of the Tutela, already knows me—or at least, knows what I want him to know. I’ve created and cultivated a persona—that of a celebrated lady adventure photographer from Cairo high society—designed to attract his attention. We’ve crossed paths more than once already, and I’ve made certain to engage him. He’ll be delighted to continue our acquaintance on his own turf,” she said with a wry smile. “I have no doubt of it. He’s already invited me to visit him at his home in London. I’m certain he’ll be delighted when I arrive at his house party at Crenshaw Hall. With…”

She looked at Max appraisingly, then nodded. “Yes, with my chauffeur in tow. Or perhaps…perhaps you could be my assistant. Handle all of the grunt work, carrying around my photography equipment, setting it up, that sort of thing. That would be fitting, Mr. Denton, in light of your considerable Venatorial strength, and it would give you the opportunity to mingle with the—what do they call it in England? The downstairs people? The servants?”

It was all she could do to keep a straight face at the expressions crisscrossing his. There was shock, affront, fury, and then at the end, disdain. Not even a flicker of appreciation for her forethought and planning. Not even a glimmer of levity.

“You’re quite amusing, Miss Eleiasa. But I am not about to be anyone’s assistant. Or partner. And certainly not a bloody serv—”

“You’re Max Denton. Every vampire in the world and most every member of the Tutela knows who you are and what you look like, thanks to the wonders of photography. Surely you don’t think you can waltz into an English country house and move about as you like without being noticed or detected. Especially with a stake as itchy as yours.”

“She’s right, Max,” Bellitano said. His voice sounded strained, and Savina looked at him, unable to tell whether he was choking back laughter or battling concern about infuriating the celebrated Venator. “You’d have to go in disguise anyway. Savina’s already got an entrée into Purcell’s residence of her own making, and you wouldn’t attract undue attention if you were—er—overshadowed by her.”

“You could be my mute servant,” she said, knowing her eyes danced with delight. “Who doesn’t understand English. Wear a fez and grow a beard and mustache—surely you could manage that in the next four or five days, couldn’t you? At least something to cover your face?—and wear traditional clothing to hide those impressive muscles of yours. Your skin is dark enough to pass as an Egyptian, or at least a half-blood one like me, and—” Her voice quivered and she probably would have lost control of it if the door to the study hadn’t swung open.

A wave of warmth and calm came into the room as its occupants stood to greet Wayren. She smiled at them and stepped inside.

“Thank you for joining us,” said Bellitano as the willowy blond woman gestured for them all to sit. “I wasn’t certain whether you would be here.”

“I felt it necessary, all things considered.” Her pale blue eyes settled on Max. “It’s good to see you.”

Savina found that interesting. Had he avoided even Wayren over the last ten years as well?

When those steady, calm eyes turned to her, Savina found herself prickling with something warm and lively. She very nearly held her breath, for though she’d met Wayren briefly over the years, she’d never been in a private meeting like this with the mysterious librarian—or whatever she was. Definitely something not simply human, or perhaps even mortal.

“You’ve been preparing for this opportunity for some time,” said Wayren. “Much planning and care have gone into this mission.”

As the older woman held her eyes, knowledge shimmered therein. Savina realized that somehow Wayren knew or suspected her ulterior motive. Her true reason for befriending Alexander Purcell and painstakingly stalking him. Was she giving her blessing? Or sending a quiet warning?

“I hope all goes as you intend,” Wayren added, then shifted her gaze from Savina. She seated herself behind the desk, arranging her long, medieval skirts neatly and sliding a slender braid over her shoulder. “Max, you must admit Savina’s plan is well thought out. And Bellitano—” she smiled warmly at the acting summa “—is correct in saying that you would not only be immediately recognized, but could jeopardize this mission. Surely you don’t wish to take the chance of that letter getting into Rastingard’s hands—or finding its way to Nicholas Iscariot.”

Max’s jaw shifted from side to side under the collective stare of his companions. He pursed his lips in distaste, frowned, and then, through gritted teeth, said, “Fine. Servant it is. But I refuse to be mute.”

GIVEAWAY:
Colleen Gleason is giving away an eBook of one of the titles from her backlist (winner's choice)! To enter, just fill out the rafflecopter below. Good luck!