As the Stanley Cup finals start this week (Go Lightning!), I thought that I would ask author Victoria Vane, why hockey is the best sport ever. ☺

5 Reasons Hockey is the Best Sport

Hockey is fast. There’s never a dull moment and when you watch it on TV there’s less commercials than other sports like football.

Hockey players take a licking and keep on ticking. Hockey is filled with hits, fights, and hundred mile an hour slap shots. Despite that it takes a lot to make a hockey player leave a game. They play through broken ribs, serious sprains and bloody face wounds. Hockey players are like The Goonies, they never say die.

Who doesn’t love a great bromance? The best teams, the ones that win the Stanley Cup, are always the ones that work well together. That kind of teamwork makes for some great bonding and you gotta love the on-ice hockey hugs after a big goal and the pile ups, equipment flying, after a big win.

No matter how clean cut the player is before April, as soon as the playoffs hit, the razors disappear. It’s almost as exciting as the games themselves to see which player turns into a full-on lumberjack in a couple games and which ones struggle with nothing more than chin fluff. Also, some players get creative growing weird mustaches or mutton chops.

What’s hotter than a man in a suit? A man in a suit walking into a hockey arena. Hockey players in suits, a pre-game requirement by every NHL team, is the perfect balance of sexy and refined as well as tough and edgy. 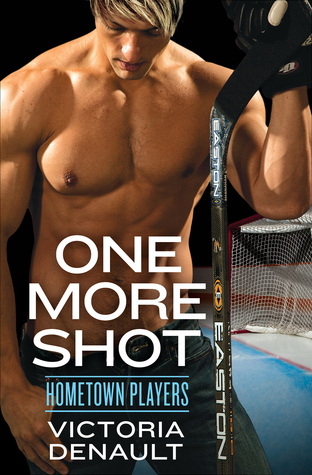 They say you only get one shot at making your dreams come true.

Jordan is determined to take two.

Drafted by the NHL at eighteen, Jordan Garrison was headed for fame, and there was only one person he wanted to share it with—Jessie Caplan. He was crazy in love with her, and had finally told her so. They shared an amazing night . . . and then everything fell apart.

Jessie tries not to think about the night she gave herself to Jordan—or how he broke her heart. She tries not to think about it, but she does. Especially now, when she's staring into his sky-blue eyes for the first time in six years. After so much time and torment, she can't tell if she loves him or hates him. But Jordan has learned enough to know a connection like theirs is rare. He was lucky to find Jessie once. No way will he lose her again.

Victoria Denault loves long walks on the beach, cinnamon dolce lattes and writing angst-filled romance. She lives in LA but grew up in Montreal, which is why she is fluent in English, French and hockey. http://www.victoriadenault.com/