Here at Reading Between the Wines we love finding new authors. Our guest today is very new and here to talk about her debut, The Longest Night! Welcome Kara Braden!

Lexi: Congratulations on your debut novel! How exciting! *raises wine glass in toast* Did your family help you celebrate? Or at least your steadfast companion...Chell, your dog?

Thank you! We actually didn’t do any celebrating, because life’s been hectic. I jumped from The Longest Night right into The Deepest Night, and my husband retired after twenty-one years in the Air Force. He was home for six chaotic months. And then we adopted a puppy, so that makes three—Chell, Darian, and Captain Malcolm Reynolds the puppy, named after the captain from Firefly.

Lexi: You certainly have plenty to celebrate, but along with that comes all the other author stuff. Interviews and talking about yourself and your writing! Your fave I hear. *winks* So we could ask you all sorts of embarrassing personal questions regarding your writing quirks...or we can ask about your tortured hero Ian Fairchild. Ian sounds too good to pass up on, what is your favorite aspect of Ian?

Aah, Ian. Ian’s a snarky bastard. That sharp tongue serves him well in the courtroom, but not so much when he’s trapped in an isolated cabin with nothing to do but read chewed-up paperbacks and try not to irritate his hostess, Cecily. Watching him try to hold back his words was incredibly fun, especially since he knew that Cecily, unlike the shallow socialites back in Manhattan, wouldn’t put up with his crap, at all.

Lexi: So the wounded man slinks away to the middle of nowhere and into the arms of Cecily. A hard woman, Cecily. Former Marine Captain and wilderness living describe her well. She sounds like fun! Or at least handy to have around if I were stranded somewhere. Did you do any outdoor activities, hunting scorpions doesn’t count, to put yourself in Cecily’s shoes?

So you know about the scorpions! It’s kind of awesome, being able to defend my home with nothing more than a spatula and a blacklight flashlight.

But for Cecily, there wasn’t too much I could do here. I’m terrified of heights, so flying a small plane was right out, and I haven’t actually seen snow since November, 1998. I do enjoy recreational shooting, though, so I was able to pull on my firearms knowledge (safety first!) for her background as a soldier and a hunter. Plus I’m very good at setting fires in the kitchen, so I had the s’mores scene nailed, first try.

Lexi: Have you ever ventured into the wilds of Canada? The beautiful snowy scenery sure makes me want to go visit. You can do that now that you are an author, think of remote locals you need to research for your next book. Speaking of your next book, we only have to wait until December! Did you have book two pretty much done when you were offered your deal on The Longest Night?

The closest I’ve gotten to the wilds of Canada was a year I spent in Buffalo. I was outside the city, so the snow was waist-deep at points. Talk about fun!

And that goes right into The Deepest Night. I actually had no clue that I’d be writing it until it just started writing itself. The character of Ray Powell came to me first, and I knew from day one that he was a former Royal Marine, which meant a UK background. I started poking around the UK, looking for remote locations, and that’s when I stumbled on the Isles of Scilly. It’s a tiny chain of islands about thirty miles southeast of Cornwall, but because of a peculiarity in the ocean and wind currents, it’s got a gorgeous, mild climate, complete with palm trees!

It’s a designated Area of Natural Beauty, as well as being the hatching, nesting, resting, or spawning grounds for all sorts of creatures. They have puffins there! And who doesn’t love puffins?

Plus, it’s got some of the most amazing stargazing in the UK, due to a lack of light pollution—which inspired what might be my most romantic first kiss scene ever. The more research I did, the more I fell in love with the islands, and now it’s at the very top of my list of places to visit.

Lexi: As a reader it is great to not have to wait a whole year for the next book! We will be looking for The Deepest Night come Christmas time. Till then, enjoy the release and all the pomp (aka: loads of work that and putting yourself out there) that goes along with The Longest Night!

This was a blast! I hope you enjoy my books. I think it’s kind of neat, having my snowbound romance released in July, and my semi-tropical summer romance released in December. They’re the perfect getaway books for when the weather outside is too hot (or cold!) to face. 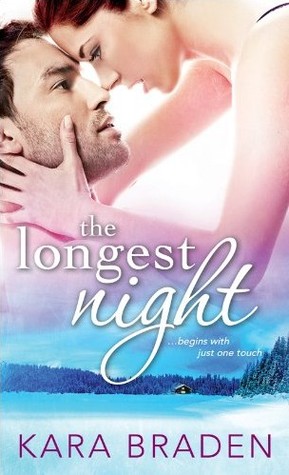 This could work, whispered the little voice in the back of her mind, the voice that had been silent for seven years…

SHE SOUGHT SOLACE IN SOLITUDE
Years ago, former Marine Captain Cecily Knight fled her dark past and the nightmares forever haunting her nights. Alone in the remote Canadian wilderness, she survives day to day…until Ian Fairchild comes storming into her life and shatters her protective seclusion.

UNTIL ONE TOUCH BARED HER SOUL
Aloof but intriguing, defensive but undeniable, Ian is everything Cecily shouldn’t want but can’t ignore. He watches her with shrewd blue eyes, as if determined to decipher her secrets…and for the first time in years, she finds herself coming alive beneath the hands of a man with too many scars to count.

As the hushed and harsh winter closes in around them, two lost souls find themselves on the precipice of a love that could save their lives…or destroy them forever.

Kara Braden makes her debut in modern romance with a story of love in isolation. She believes that engaging, romantic fantasy can be found everywhere in the world, even in the most unlikely places. With the support of her wonderful husband, cats, and dogs, she writes from her home office outside Phoenix, Arizona, where she spends her time hiding from the sunlight and heat.

GIVEAWAY:
Sourcebooks is giving away one copy of THE LONGEST NIGHT to one reader today. (US & Canada only.) To enter, just leave a comment or question for the author on this post and then fill out the rafflecopter below. Good luck!
a Rafflecopter giveaway
Posted by Crystal @ RBtWBC at 7/09/2014 10:00:00 AM